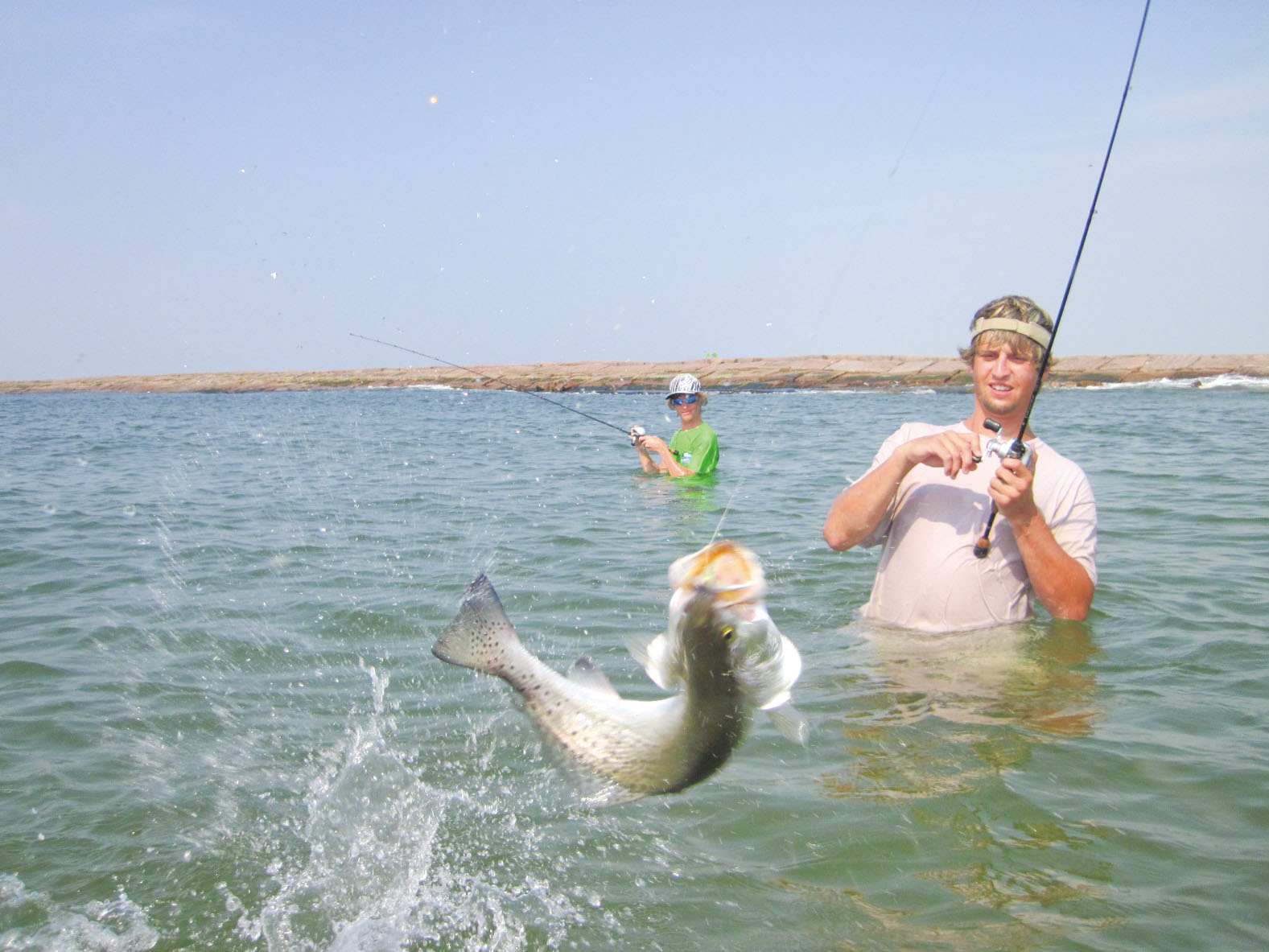 I am not going to talk about the July heat - let everyone else bellyache about it. What I will say is; even though the sun will be blistering some days, the fish will still bite.

We get a little earlier start in the morning this month and try to be back at the dock before mercury readings hit the century mark. We catch fish both in the boat and wading. Most of our drifting trips will be in East Bay. This bay continues to produce solid trout right through summer. In May my boat released fifteen trout over six pounds while drifting, including a beautiful thirty-incher. There are few estuaries that rival East Bay's propensity to give up big trout year round out of the boat (only Calcasieu and Sabine come to mind).

July is notorious for slicking off flat, allowing the bay, jetty and surf equal fanfare. With great weather and endless possibilities, it is a tough early-morning choice to decide which direction to head.

When wading, we throw small Super Spooks and She Pups on the incoming tide and expect a crash. Later in the morning we ease to deeper water and toss Chicken on a Chain Bass Assassin Sea Shad and Lil' Tappers. When drifting, Gulp! and live shrimp under a popping cork continues to give up heavy trout; and redfish can be found in large schools over the same shell.

Good News: The sharks are back! West Matagorda Bay has grown to be a shark-magnet. One thing lots of anglers overlook when the gray linebackers are absent, so are the fish. Sharks are a trustworthy barometer of how many fish are on any given sand and grass flat.

Most seasoned waders know that using the traditional 15-25 feet of nylon cord with a float attached for a stringer is asking for trouble in West Bay. We use them fall, winter and spring, or until the first signs of sharks appear, then break out the five-gallon buckets.

Buckets are cumbersome, take up extra room in a boat and actually pull and tug on waders when fishing the surf or around a pass. Cord-style stringers are much lighter, easier and more maneuverable; nevertheless, if you wade West Bay from now until October and plan on catching fish and putting them on a stringer, plan to shake hands with a shark.

Most recorded shark bites are mistakes, so take precautions. Keep your catch in a bucket, or if you must use a stringer, make sure it is at least 25 feet away from you.

Though I will not admit it to my wife, I have been brushed by a shark a couple of times it's an eerie feeling to put it mildly. Still, I have a better chance of being in an automobile accident on the way to the boat ramp than a shark attack. Those odds still don't make her feel any better.

That's not to discourage wading I will be doing plenty of it this month and, I still like receiving a royalty check from the wadefishing book I wrote 10 years ago. So keep on wading and reading.