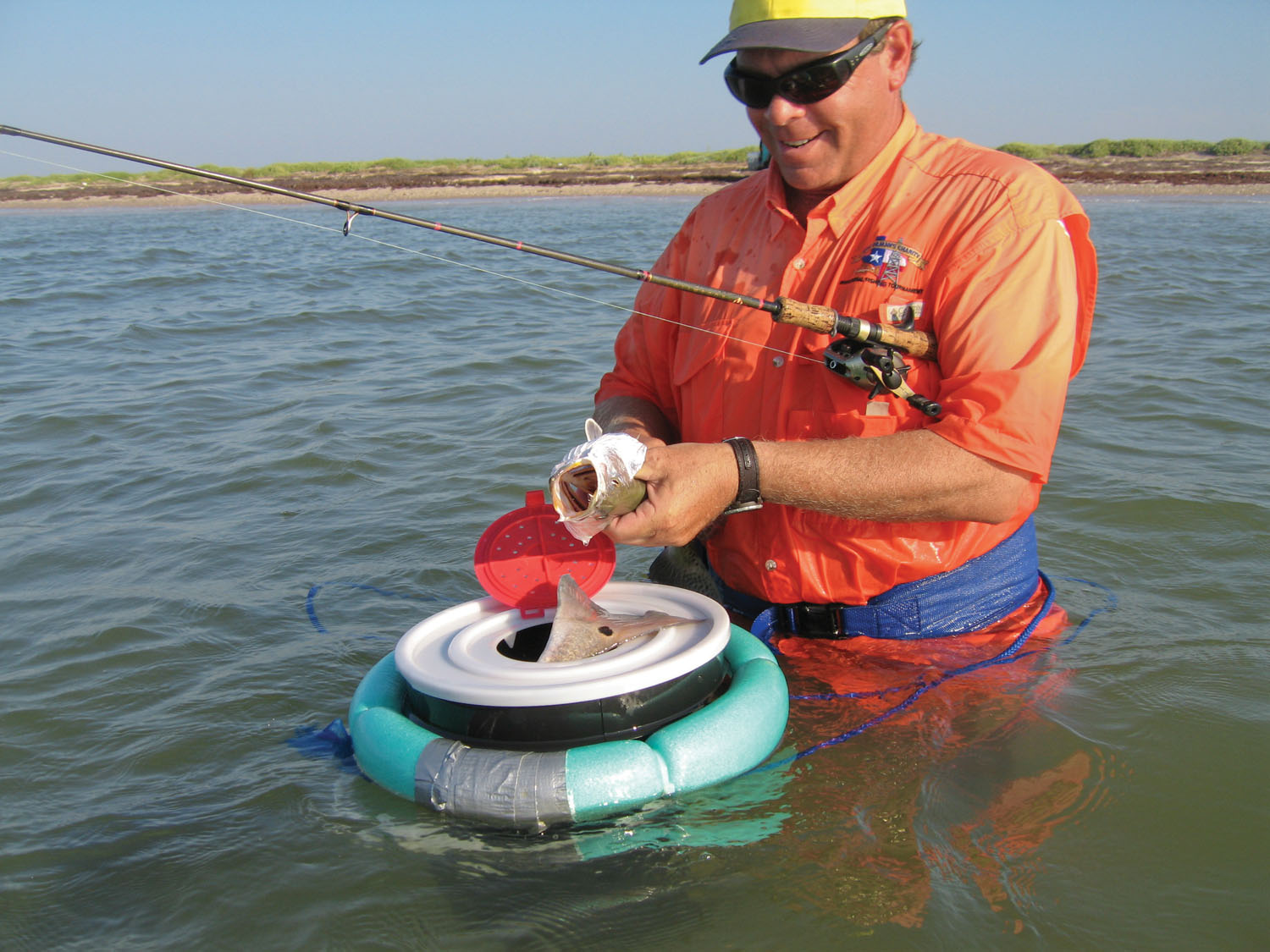 Unless you want to shake hands with a shark in West Matagorda, ditch the stringer and grab a floating bucket.

West Matagorda Bay has grown to be a shark-magnet during the summer. Last summer the gray linebackers were noticeably absent, but so were the fish. Sharks are a trustworthy barometer of how many fish are on a sand and grass flat.

There have been plenty of solid catches from West Matagorda Bay with healthy tides; and, there have been reports of ripped and mangled stringers from "five to seven footers" dining on kabobs of spots and dots.

Most seasoned waders know that using the traditional 15-25 feet of nylon cord with a float attached is asking for trouble in West Bay. We use them in the fall, winter and spring, or until the first signs of sharks appear.

It's time to break out the floating buckets.

Buckets are cumbersome, take up extra room in a boat and actually pull and tug on waders when fishing the surf or around a pass. Cord-like stringers are much lighter, easier and maneuverable; nevertheless, if you wade West Bay from now until October and plan on catching fish and putting them on a stringer, plan to shake hands with a shark.

Speckled trout are there because gobs of glass minnows (bay anchovies) and shorelines full of mullet have shown.

Fishing the minnows is normally an April affair, but this year it began later, much like every other annual weather and tide-related occurrence. Factor in that beach and bay water temperatures have been above 70-degrees for almost two months now and there should be no surprise why gulf pelagics have arrived.

If you are going to wade, take precautions. Most shark bites are mistakes. A flailing arm or leg sometimes looks like a wounded fish. Keep your catch in a bucket or if you must use a stringer, make sure it is at least 25 feet away from you.

I have been brushed by a shark a couple of times; it's an eerie feeling, to put it mildly.

However, I have a better chance of being in an automobile accident on the way to the boat ramp than a shark attack. I'll play those odds any day, especially when trout are busting topwaters like they did this past week.

Keep in mind the guys in gray suits are bigger and thicker along the beachfront. You pluggers who like to wade the surf have waded with big sharks whether you know it or not. Those who regularly catch fish along the beach have probably seen a shark or two.

If you "ain't" getting out of the boat, there are plenty of fish to catch drifting. In fact, all trout over seven pounds caught on my charters have been while drifting deep shell in East Bay.

You really have just as good a chance catching a big one out of the boat.

With that said, Matagorda Bay is in the best shape I have seen it in a decade. Our bays are thriving.