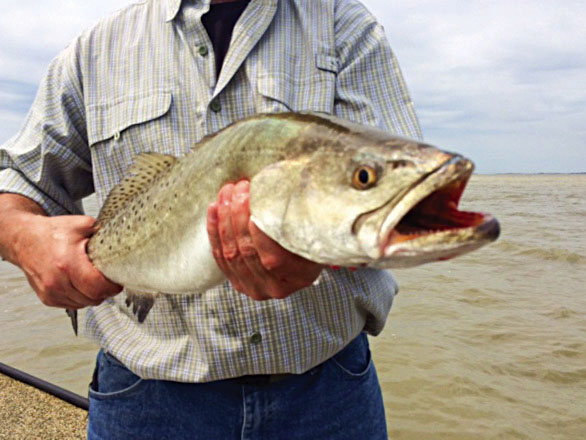 The Matagorda surf can be full of surprises for pluggers like this 30-incher; when all we had handy for the photo-op was a cell phone.
As my tires hit the Matagorda sand it was evident my backyard pool had more of a chop on it than the Gulf of Mexico. It's a plugger's dream to work a topwater in an emerald surf, hearing every ball-bearing click as it dances left and right. The anticipation of a crushing blow from a intense speckled trout is what sends many anglers to the beach when winds calm and green tides creep close to the beach.

With water temperatures in the mid-70s, the surf is only a light north wind away.

Obviously, the appealing attribute of the surf is its access by anyone on foot; and, with the invention of surf cams up and down the coast, you don't have to waste a tank of gas, praying all the while the water will be green and the waves flat.

Know the tides before you take the plunge. You are wasting your time fishing the first gut at the end of the outgoing tide. Likewise, you are probably stepping over fish to get to the second bar at high tide.

Hopping shrimp and flipping mullet are strong indicators of fishy locales, so are picking seagulls and diving pelicans. Speckled trout are ambush-feeders and like to use structure to flash prey. The only structures on the beach short of a sunken shrimp boat are the guts and sand bars that run parallel to the shore.

Breaking waves tell you where bars are located. The swells build in the deeper guts and crest on the shallower bars.

Though wading the surf is a welcomed rite of summer, anglers should always take precautions before diving into the ocean. Too many anglers die needlessly every summer due to neglect and/or disrespect for the foam.

Riptides most often occur on a falling tide; and, most waders fall victim to rips because tides are receding and anglers must fish the outer bars in deeper water. Best advice is to use common senseif currents and tides are too strong, get out of the pool. No fish is worth a life.

Beside the safety factor, there is an advantage in fishing the Gulf from a boat, especially on an outgoing tide. Drifting allows you to cover more ground and work deeper water that could not be reached on foot.

There have been days I have worked the entire 28-mile span of the Gulf from Matagorda to Port O'Connor, picking up a fish here and there. Then there have been days when I made my first drift, hit a fish, anchored, and never moved.

The jetty heated up for a few days during May and we caught limits of redfish and solid 3- to 5 pound trout. It only gets better in June.

When waters are green in East Bay, we will drift the deep reefs and wade the mid-bay reefs. You always have the potential to catch a big trout in East Bay, evident by the 30-incher (pictured). And, normally we catch and release a handful of 5-7 pounders when the weather allows us to stay on these fish for several days.

Better June tides will allow us to wade the sand and grass in West Bay. The morning incoming is best for feisty specks on Super Spook Jrs and She Pups.