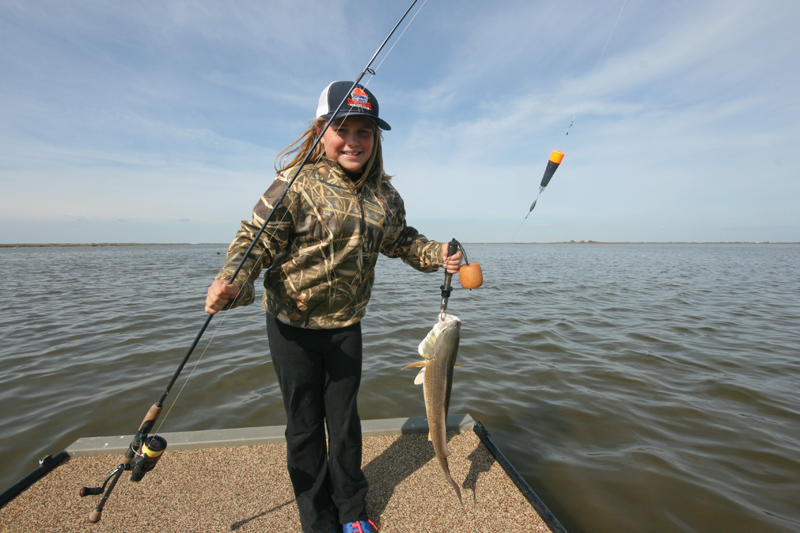 It's a tough choice for guys like me – fish or hunt ducks. That's a serious dilemma this time of year. Duck season only lasts 74 days and we try to squeeze in as many days as we can but, November in East Matagorda Bay is arguably the best fishing month of the year.

Most of the time I compromise – hunt ducks in the morning and fish the afternoon.

Hovering gulls point the way this time of year; and, our bumper shrimp crop could give us the best November fishing we have seen in over a decade.

White shrimp determine how successful autumn fishing can be; and, salinity levels usually determine the fate of white shrimp. "Whities" grow in the marsh during the spring, with optimal brine levels around 15 ppt (parts per thousand). White shrimp do not mature and grow in high salt contents like a brown shrimp, so in periods of drought white shrimp crops have been below average. That's why we haven't seen many birds working the past five years.

However, with spring and summer rains, salinity levels are optimal and the shrimp have responded.

October was once believed to be the best month to work the birds, but changing weather patterns seem to have pushed the bird pattern back to November. Things seem to be later and later every year. It has been hot the last few years in October and we haven't been getting the first cold front of the year until November, so the general fall fishing pattern has been later, too.

The first few cold fronts of the year have significance. Swelling October tides push water to the back reaches of the marsh where shrimp stage before starting their trek to the Gulf of Mexico. Not until a blast of cold wind hits the coast do tides fall and shrimp begin to descend out of the marsh.

Soft plastics bounced along the bottom is the favorite way to work schools of fish in East Bay. One school may be solid trout and the next may be all redfish. There is really no way to tell.

If you want to weed out the smaller fish, throw topwaters exclusively. I like the Spook Jr. and She Pups, but pretty much anything that floats will work.

While most folks are working the birds, the mid-bay reefs are often left alone. Few people around these parts wade during November, the drift-fishing is that good, but there are some great fish to be caught on the shell that is shallow enough to wade. Big trout hang on those reefs and eat smaller topwaters, especially when we have a good shrimp crop like this year.

Those big fish also eat plastics. One of my better days in East Bay came while tossing five-inch Bass Assassins off the edge of a reef in November. Birds were working all over the bay, but the bigger fish were on the reefs, not under the birds. It happens quite often.

West Matagorda Bay gets overlooked for trout in November because there are so many redfish. All those little pieces of shell on the north shoreline hold lots of redfish. Deeper reefs off the shoreline hold the trout.

We will work schools of redfish running down the shorelines in herds. I like tossing a topwater, but many throw a soft plastic under a cork to keep the jig from hanging in the shell. Sometimes it's just fun to stop and listen to those redfish crunching their jaws and making a popping noise while feasting on shrimp.

It's a great time to be outdoors.