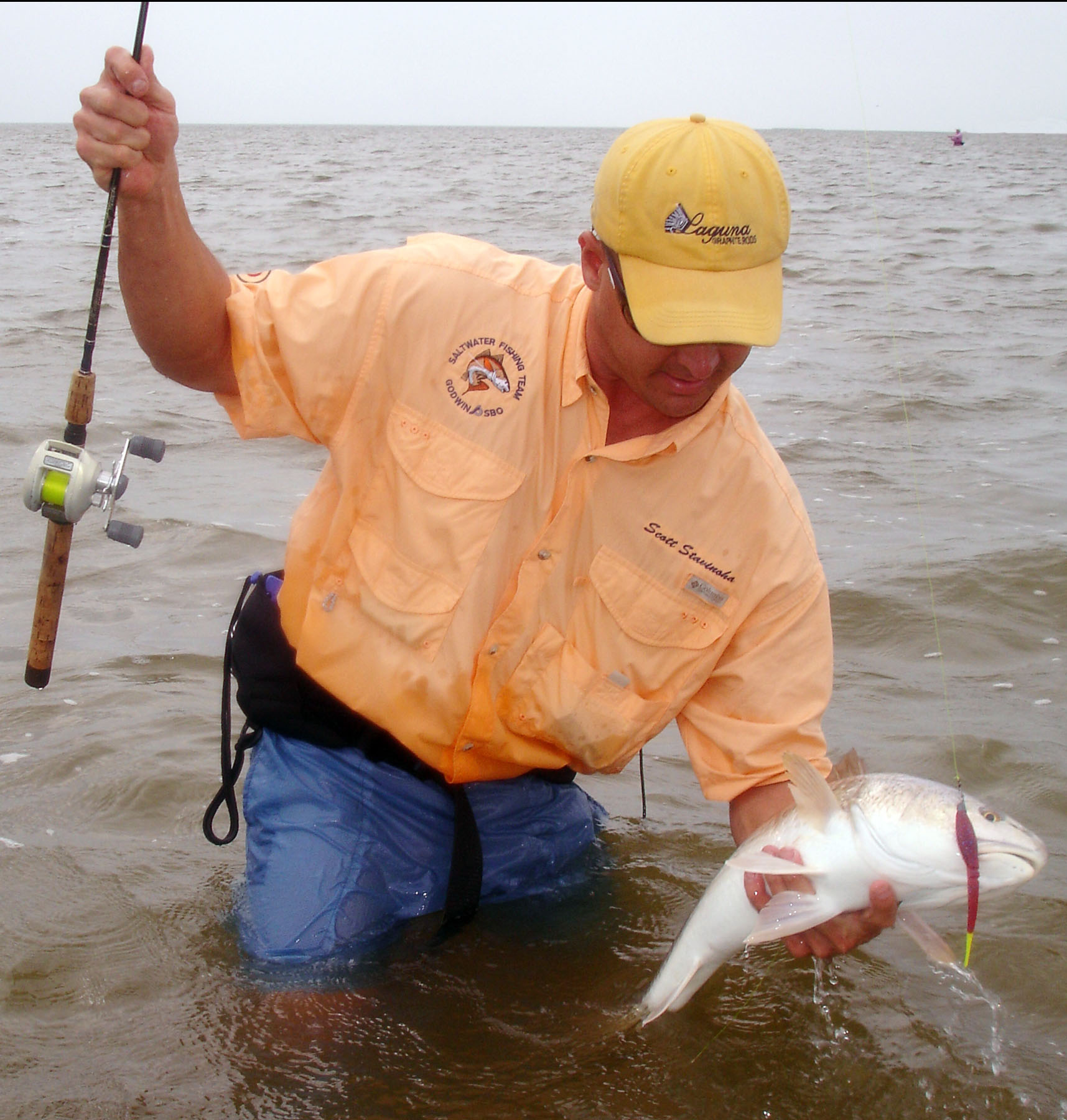 Scott Stavinoha, having fun both catching AND releasing fish he didn’t need for the table.

The typically harsh, arid environment of the Lower Laguna is sporting a fresh attitude this season. According to records, it was the wettest July this country has seen since 1976. When you put water on an area which normally doesn't get it the land jumps, green and remarkably lush. The final approach into Port Mansfield, along the intriguing but normally desolate Hwy 186, now looks more like a scene from an African savanna. Herds of fattened Nilgai antelope graze in the distance and are framed in the foreground by turkey, quail, dove, and bucks showing off their new large velvet racks. The rain seems to have also given our hyper-saline Laguna a welcomed boost. There are more shrimp dancing on the surface and blue crabs scurrying in the grass than we've seen in several years. In short, deep South Texas is robustly healthy for now, and with any luck, so will be September's fishing!

To recap late summer, it was fairly typical with low tides, lowered winds, and topwaters fouled by floating grass. Yes, we shake our fists at those floating weeds, but an abundance of grass is largely why we enjoy clear water and a thriving nursery. What was different was the overall temperatures. Cloud cover and chilling rains helped keep things cooler than normal for a while, and quite by accident, we found that some good fish were cooling off shallower than normal as well.

We noticed that the reliable pattern of mid-day fish pulling down into deeper holes was in some areas becoming less consistent. Were they fished out, did they simply move, or were they feeding at night? One day after waiting again for fish that never showed we failed to jump the boat up in time before drifting onto an extremely shallow flat. Committed to a long drift to where we could get back on plane, we raised the motor and just watched. To our amazement, there, in water perhaps 6 to 10 inches deep, choked with grass almost to the surface and detached clumps of thick reddish algae, were numerous fish of all sorts. They were buried in that heavy cover like rabbits in a briar patch. You wouldn't see any indication of how much life was there until the drifting boat spooked them. There lay trout, redfish, drum, sheepshead, and even flounder in water barely able to float a boat and in the middle of a hot summer's day at that. According to standard fire-side fish talk, they weren't supposed to be there.

It was difficult to fish, but we were eventually able to catch them with long casts, small weedless spoons and tails, and small topwaters rigged with single hooks. On several days we were able to repeat the pattern. One beauty about hunting for fish with lures instead of waiting for them on anchor is that the potential for new discoveries is always there. After looking closer, we may have discovered another reason why fish chose to use this uncharacteristic area during the middle of the day. While weather records were being set, another pinnacle in the Laguna this year may very well have been boat traffic. This particular area (and others we have found since), are very close to heavily trafficked areas, but where few if any boaters normally venture. It seems like new safe havens are forming, and new approaches are starting to make more sense. This was another wake up call to keep the discovery part of fishing fresh in our minds, which is the really rewarding part of lure fishing anyway.

We may have to change our habits if we want to continue enjoying what we do. If something we already know quits working, let's don't be afraid to invest the time and look for something else. Being a fisherman means much more than simply being able to catch a fish. Almost anybody can catch them if they are present, but these days, finding them is as much the art as anything.

As far as a September outlook, traditional patterns suggest increasing water levels, more redfish bunching up and tailing along the shorelines, and larger trout feeding more aggressively in preparation for the last spawn. That can mean more consistent topwater action, something all lure fans look forward to. Unless something revolutionary happens, we will probably stay with She Dogs, Skitter Walks, and Super Spook Jr.'s depending on conditions. As far as colors go, I lean towards chartreuse and bone. If nothing else, I can see these colors well and am better able to pay attention to working them. Yes, single Gamakatsu hooks will be on all of them. They let me negotiate floating grass much better, and I like the security of not being threatened as much by the errant headshake of an angry fish full of trebles.

As mentioned, groups of tailing or water pushing redfish will become more available. Some of them can show up in places you didn't expect, so always be ready to cast while running the boat. When you do spot a group of these fish, please resist the urge to "torpedo" them. "Torpedoing" means running into them on purpose and casting while they are fleeing. A much more responsible approach is to circle back with a trolling motor, pole, or feet. Not only will you be in a much better position, you will not harass these fish. The intentional crashing of fish is one of the things causing them to alter their habits. In fact, there is a new law coming this September which states we cannot use a vessel (any vessel, not just airboats) to harass fish. It will be interesting to see how this law will be interpreted on the water.

As another reminder, we are going to a five trout limit south of Marker 20 on September first. Any boat launching from this entire designated area is expected to abide by this new ruling. It will also be curious to see how most fishermen handle this. Will more people fish simply for the love of fishing? Will there be more like Scott Stavinoha and party, who retained the fish they wanted the first day and then released everything the second day, opting to concentrate on fun instead of food? Most we talk to look forward to the catching of better quality fish in the future, whether they fillet them or not. Again, we, like our fish, may have to look at changing our habits if we want to continue enjoying doing what we do.

We all need to remember that the Laguna Madre, as in all sacred places along our coast, is fragile and in a constant state of change. Let's all do our part to make it more enjoyable, whether it means hunting up new patterns, having new goals, or giving schools of fish and the other boaters a wider berth. Let's discover September together this year with a fresh and robust attitude. It looks like it's going to be a good one.