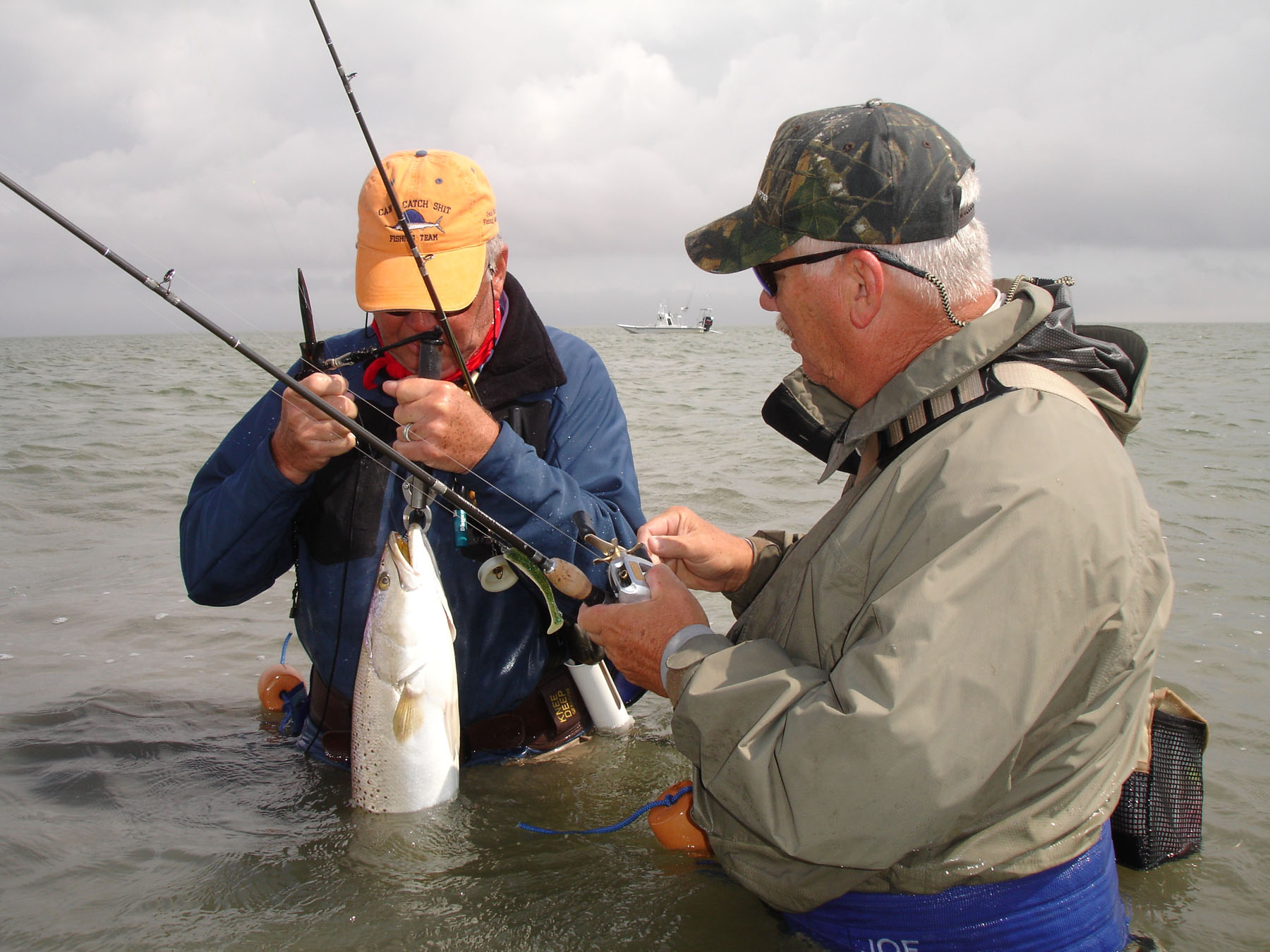 Ron’s big trout drew everybody’s attention. Trying to get these fish released in good condition is a priority.
Spring came early in the Lower Laguna Madre. By the last week of February we enjoyed water temperatures above seventy and vivid wildflowers garnished the roadside. The fishing was good, especially for the big trout South Texas is famous for.

The week before Dave Holder's Houston Fishing Show, our boats caught and released four monsters over nine pounds. Numbers in the four to six pound range were good and a few pushed eight and we had redfish strapping up to thirty-four inches. Although we had a few good topwater sessions, most of our better fish came on tails, more specifically Brown Lure's Devil Eye on 1/8th oz. jigheads. It's a good all-around and durable lure. For reasons known only to the fish, darker colors and slow loping retrieves worked best.

Even on the larger trout the bite was often delicate. It took good equipment to detect the light pickups. If we are serious about chasing the best fish our bays have to offer, it only makes sense to use properly balanced and well-maintained equipment. If there are any questions about upgrading your gear, tell the experienced staff at Fishing Tackle Unlimited I sent you. They know what I use and have both the knowledge and products to help make your fishing experience all it can be. Check out their Titanium All Pro rods and their recently upgraded no-nonsense wading gear. The more seriously we take our fishing, the more serious fish we will catch.

Back to big trout; like any worthy prey, they take dedication to locate and determination to fool with lures. Timing is critical. There were situations where we knew we were standing in good fish, but would cast for hours without hooking a thing. It takes patience and confidence to wait our turn. Usually, something has to trigger these larger fish to bite, and experience tells us that it can be any number of things.

With the Bruce Cranfill party it was basically dead until 2:00pm. The wind picked up and streaked the water and it all came alive. With the Felo Guerra group, the moon over major kicked in. It was the recovery day after a norther, a new moon, and the mid-day major gave us two precious hours yielding two fish over nine pounds, an eight, and several going three to six. As it often happens, everything stopped as suddenly as it started. The lesson? We catch more fish working high-potential areas thoroughly and waiting out the feed than we do burning fuel and precious time. Many people still retain unrealistic expectations, but successful fishing with lures usually requires more than just skill and luck.

April is showing promise. As of this writing, we have seen redfish invade the flats in great numbers. Although they are there one day and gone the next, the shear numbers of wakes and mud boils are encouraging. As more of them move to the shallow sand, sight-casting will become a thrill. Unless they are cowboyed by other boats, they should hold for several hours and then we will follow them to grassy potholes. Many lures will work, but it's hard to beat soft plastics and weedless spoons. Even in high wind the flats can remain clear enough to spot cruising reds. Again, equipment is critical, especially your eyewear. Flats fishing is mostly luck if you can't see. I use Maui Jim's with rose lenses. The contrast and color help me see fish that others can't seem to identify.

Our trout are showing similar promise and we have hopes that it could be one of "those" years. We all know that nature runs in cycles and we are due for a big trout year. 2006 was a great year for larger trout and we have escaped yet another freeze, the water is in exceptional shape and the bait fish are thick. What we have seen so far is more than encouraging, and we are hearing similar reports from across the entire coast. Still harder here are those mid-sized fish, but we seem to have good numbers of fish on either side of the twenty to twenty-four inch class. Recruitment seems to be good, however, as the Laguna is full of undersized trout. Please handle both the under and over-sized fish with care if you value next year and the years to come.

April of course traditionally brings inclement wind. Yes, it can be frustrating, but those who work with it and not against it will do well. Watch how wind moves water levels to a fishes feeding advantage and try to be there. Pay special attention to color changes and mud lines holding good concentrations of bait. Apart from sight-casting in the clear shallows, we had some of our best fishing last April in water with minimal visibility. Topwaters, especially She Dogs in heavy chop, accounted for some heavy catches and we fully expect to do it again. This year we will even be able to get a plug into more of these wind-blown grassy situations with almost the exclusive use of single hooks on our topwaters.

Remember, when the wind blows hard in the Laguna, it moves water from somewhere and moves it to somewhere else. Take advantage of areas where fish are drained into nearby guts and then in back areas which become flooded. As previously written, it's the "sloshing bathtub effect", so when the wind subsides the movement reverses. Working a good plan can increase our odds tremendously. As mentioned, timing is critical, so let's be patient and work to catch the fish we know are there. Good luck and here's to you getting your personal best fish in spring 2007. I am looking forward to getting mine but thirty-three inches is going to be hard to beat.