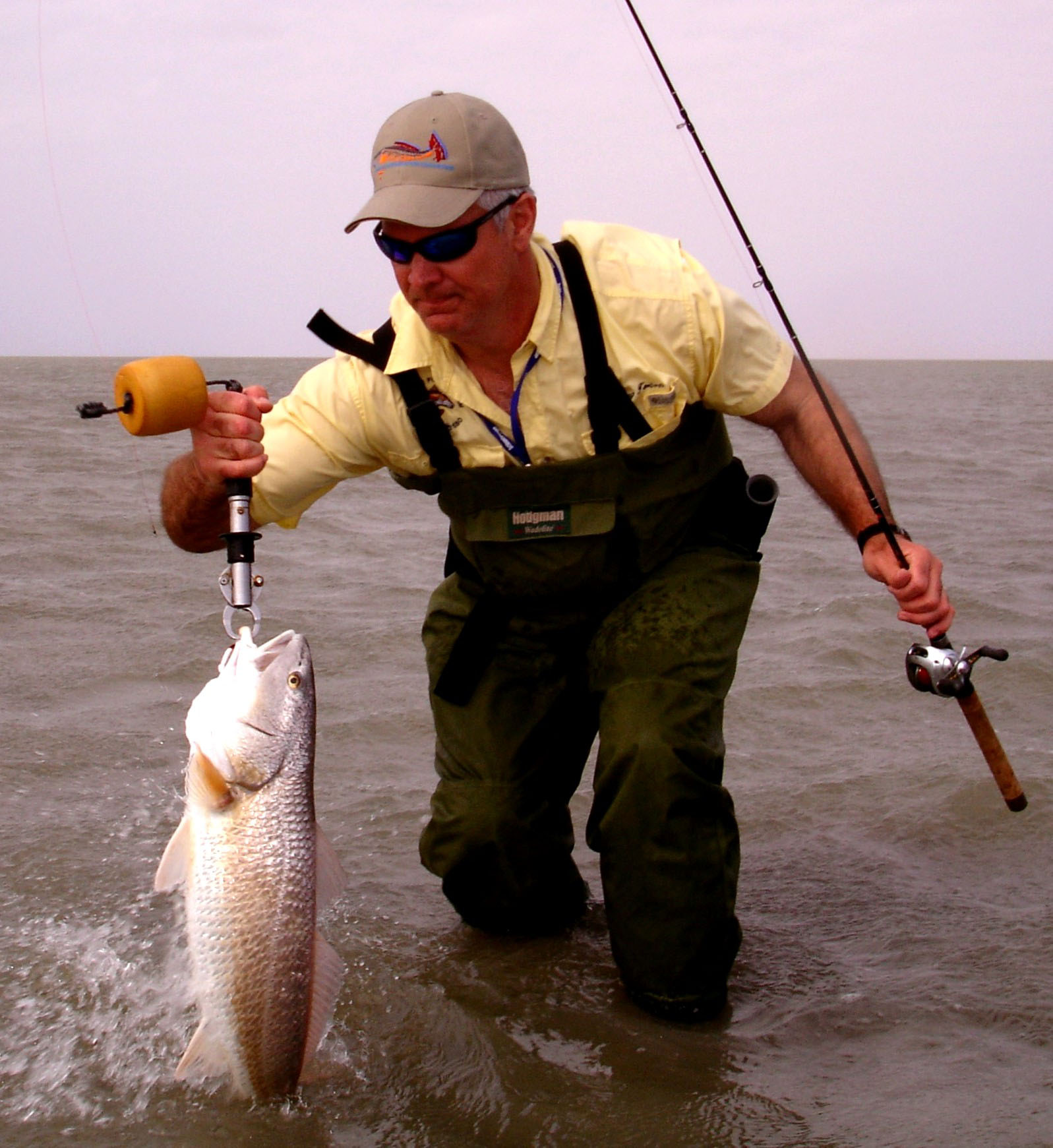 Our shallow water redfish are about as good as it gets.
Life on the South Texas flats has been just about as good as it gets. Early spring brought us pleasant weather, thrilling topwater trout and tackle-testing redfish. Since the last issue our best trout action has been found over knee to waist deep grassbeds lying near deeper water. A variety of lures have been working; topwaters, Corkies and soft plastics. Plum and other darker colors hopped slowly near bottom have been most reliable. When it was topwater time Rapala Skitter Walks and MirrOlure She Dogs accounted for some head-turning explosions in the choppier water, but as usual the Super Spook Jr was best during calmer periods. Topwater colors did not seem to matter as much as figuring out the best retrieve. Redfish action has been steady with good numbers of heavy slot fish and also lots of undersize fish in the mix. Redfish recruitment appears very healthy with all these up and coming youngsters. An abundance of “schoolie” trout is a sign of strong recruitment within this species also.

A sure sign that spring came early was found in shallow water. Over the past weeks we have enjoyed days between fronts when we managed to catch some excellent fish basking in calf-deep water; sometimes barely covering our wading booties. Best baits in the extreme skinny were softly presented tails in natural patterns, but much of the success depended on stealthy approaches and long casts rather than a particular lure. We high-fived over several over-sized redfish between ten and fifteen pounds in less than a foot of water, plus a fair number of trout between six and eight pounds. This is what the Laguna is all about when she’s at her best.

Many of the productive areas we worked during March were not the postcard clear waters Port Mansfield is famous for, but rather in areas of murky water, devoid of grass, where the clue was lines of nervous baitfish. Most of the shallow areas we found holding thick concentrations of bait also held some good-sized predators. Catching them required much more than luck, though, confidence combined with willingness to stay with it was the key. Faster action may occur out deeper, but up in the super skinny the next cast could very well bring your best fish ever.  Wade slowly, be confident they are there, and stay alert to every sign. Above all, keep casting!

April will mark some significant changes. Some will be exciting and some will offer the typical and frustrating challenges of spring. One change will be increasing water levels that will present opportunities to employ different methods.  Sight-casting on the sand will come into greater play when conditions allow. Patience, keen eyes and long precise casts are needed to fool wary redfish in clear water, not to mention large loner trout that often cruise with them.  Sight-fishing is my greatest passion and perhaps the most exciting aspect of fishing the Laguna Madre. For clear water work we always rely on natural-colored soft plastics on 1/8 and 1/16 jigheads.  Never discount good old red and white when stocking your lure box. It has worked for decades and still a good one.

April is also one of the better months to expect heavier trout. Winter-fat fish laden with roe are often available to wading fishermen stalking shallow shorelines and submerged spoil banks. Spawning activity will have them feeding voraciously and the signs will be small slicks popping in the shallows, leaping bait, and bird activity. Life is good when you find these.

I’d like to emphasize part of last month’s report.  While large topwaters are awesome producers, let’s don’t forget that much of the forage available during springtime is quite small. The flats should become thick with small shrimp, crabs and juvenile baitfish. Competing with these natural foods can be challenging. We experienced days last spring when the smaller version of the Brown Lure’s Sea Devil and the Corky Devil caught fish when little else would.  Your lure doesn’t always have to be big, noisy, or colorful to deliver big results. A mere morsel can often pull fish when the full meal deal cannot. Making good decisions makes us good anglers.