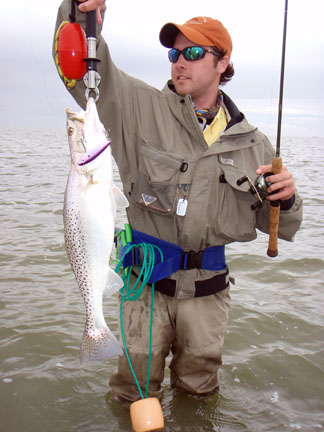 Despite extremely low tides and April-like weather showing almost two months early, fishing remained on a high course down here on the magical lower coast. Who knows what the real April will bring, but chances are our good fortune will continue.

Except for one significant norther, mid-February through mid-March brought early southerly winds and higher than average water temperatures. Despite the spring-like conditions, the fish didn't alter their patterns much. Perhaps because it was still officially winter on the calendar, most fish seemed reluctant to stray far from deeper water. They did, however, remain concentrated on the adjacent flats and tapering shelves. Where we found one good fish we often found scores of them even under a variety conditions. The Baker trip would be an excellent example for many things that we've learned, relearned and loved about fishing lately.

We call this the Baker Trip because Davis Baker booked it after catching a ten pound trout with us last time. He was also the guy who waded wet last February. Davis brought seven like-minded adventurers to share three awesome days of loosing count of trout over four pounds plus several kicker sixes and even a few that weighed heavier. It was what fishing is supposed to be, and it has been exactly that here for several months now. The typical challenge lately, instead of having to find fish, has been finding the best lure presentation to match the bite as it changes throughout the day. These guys hung in there and were determined to make each cast count.

During slow periods it was all about soft plastic and color didn't seem to matter. When the fish were down we went down to them using a slow hop just above the grass. However, when it was feeding time, everybody caught fish on whatever they wanted to throw tails to topwaters. Most fish were in knee to thigh deep grassy potholes surrounding large depressions; the same places they have been for months unless temporarily driven away by northers.

What was reinforced is that knowing you are on fish is not always enough to make it easy; rather than going looking, it is usually best to stay put and fish smarter. We were also reminded that the fishermen who do well are usually those who fish enthusiastically through slow periods; a far cry from those who cry because it isn't as easy as hoped for. Also confirmed was those who used braided line faired better on both lure control and strike detection. Thank-you Sufix! Lastly, despite excellent catches, it is seeing people enjoy life on the water that makes fishing worth loving.

With the coming of April the tide levels will begin to rise considerably. That not only means more water and more places for fish to hide, but also more water to hide the many new obstructions remaining from Hurricane Dolly. There are also new dredge spoil deposits along the ICW which are unmarked. Those of you who did not have the chance to learn about these lower-unit eaters when they were visible on the low winter tides, please make a note to navigate with extra caution. Some of these could bring a quick and nasty end to your fishing day.

We are predicting continued opportunity and success for heavy trout and, of course, lots of Lower Laguna redfish. With the rapid rise in tide and water temperature, April is not always a gimme. Just when you think you have everything figured out the trout and redfish can disappear for days at a time. One thing that can help improve success is downsizing your offerings. This includes your surface plugs; much of the trout and redfish diet will consist of small shrimp and finfish that are barely fingerling size.

Moving with the fish is one of the primary keys during springtime and it is especially important to remember what I call the bathtub effect. Just like splashing in the tub, late afternoon wind from the southeast will push a lot of water toward western shorelines. When the wind diminishes during night and early morning, the water flows back to the east. As levels change fish move, and so should we. If it's going to be windy, and it probably will be, do pray for southeast. The Laguna's famous seagrasses will be flourishing soon and this increases our chances for good water clarity even when the wind is howling.

In short, fishing has been excellent and should continue. Let's respect what we have and do our part so it continues. You've just gotta love fishing!