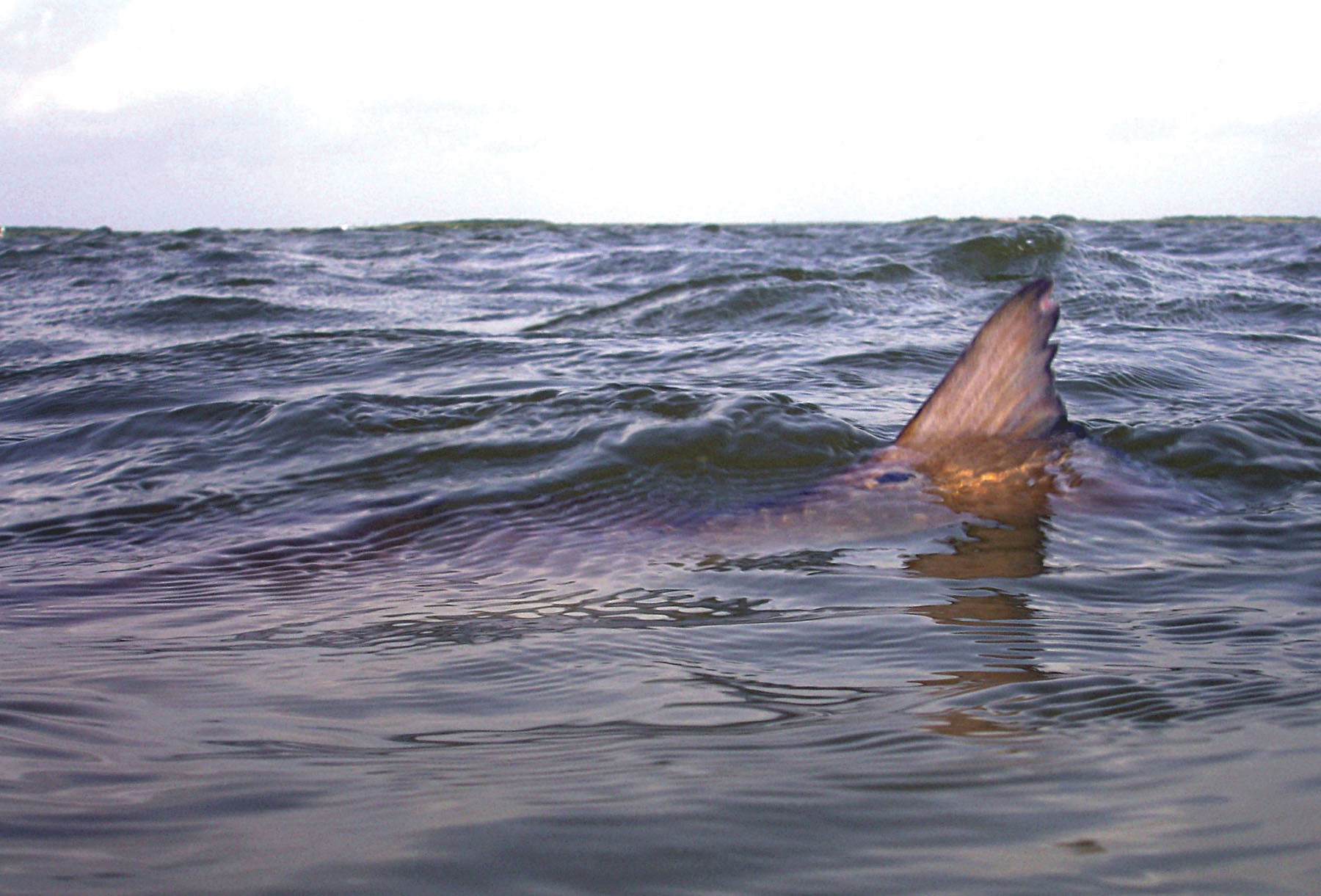 If you stalk quietly, you can sometimes find fish within kicking distance.
Fishing during the late winter period, while excellent at times, will have to go into the record books as disappointing. However, and to be fair, anything short of spectacular would be a letdown compared with what we had in 2009.

We just weren't given enough good weather days to hit it as hard as we wanted to, and when we did, the fish seemed to be scattered and often not eating well. We did catch quite a few trout between twenty-eight and thirty inches, but it took a lot of probing and the timing had to be right. Our normal redfish stack-up situations after northers weren't anything like last year either. Very few times did we see either trout or reds pull into the extreme shallows for any length of time. With the water temperatures staying mostly in the 50s from January through early March, perhaps many of them stayed deeper and out of wading depth. However, when it was on it was on, unfortunately those stronger feeds didn't last very long.

Another thing we have been sorely missing has been a topwater bite. Who knows why, but even when the subsurface bite was strong the fish just didn't seem to want to come all the way up. Tails in thigh to waist deep water have been the rule, but the experienced Corky guys continued to do well. Colors didn't seem to have mattered as much as finding concentrations of fish and good presentations. Which one of us can't wait for more consistent opportunity?

With sitting at the house riding out norther after norther, I've had a lot of time to dream about what all of this is really supposed to be about. I think about some awesome times past and look forward to the enchantment spring will bring us. One trip in particular comes to mind, just a couple of us girls out for an entire day of sightcasting on the shallow sand.

Gina Saenz Rice, Assistant Director of the CCA STAR Tournament, and I eased out one morning before dawn to anchor along a spoil bank. Suspecting but not knowing that good fish would be prowling on the other side, we committed to a long walk far back into the flats. As the sun sneaked above the horizon, almost every direction revealed redfish tails waving in the clear shallow water. With not another person or boat in sight, Gina went one way and I went another, each chasing our own personal dreams in a fantasy-like setting.

For hours we stalked quietly and picked the fish we wanted to catch until our arms hurt. We had separated a good distance, but periodically would look up and give each other a thumbs-up signal with one hand while letting the drag strip out of the other. No words, no talk, no distractions; just the beauty of the Laguna Madre at it's finest and the challenge of the chase. Even when the wind picked up and the tails went down, the crystal clear water let us throw at cruising fish sometimes within kicking distance. When she and I finally met up we both agreed it had been a spiritual experience. Sadly though, those days are becoming fewer here in our beloved Lagoon.

The area Gina and I fished requires a dedicated walk to reach, if you want fish to be there when you arrive, that is. Now, as in many other areas, many boaters have unfortunately decided to crash these once taboo sanctuaries instead of approaching them with more reverence. Many times we see people blow through waders or tailing fish on missions unknown, and predictably, we see fish not using some of the prime spots as they did in the past. I wonder if some of these new boaters have ever witnessed scenes such as Gina and I experienced. It seems that if they did, running through such pristine habitat would not be an option.

The season to walk, stalk and sight-cast is upon us. For many, casting to fish you can see is a fantasy. It's O.K. to dream, as that's what fishing is all about, but down here in the Laguna it can be a reality. Let's all try to respect one another's space this season, but above all, let's respect the fish we are after. A quiet pre-dawn walk is good for the soul, and those tailing fish just might wave you in with unsuspecting approval. Let's hope this winter was only a cold-weather exception and the fantasyland fishing will continue.