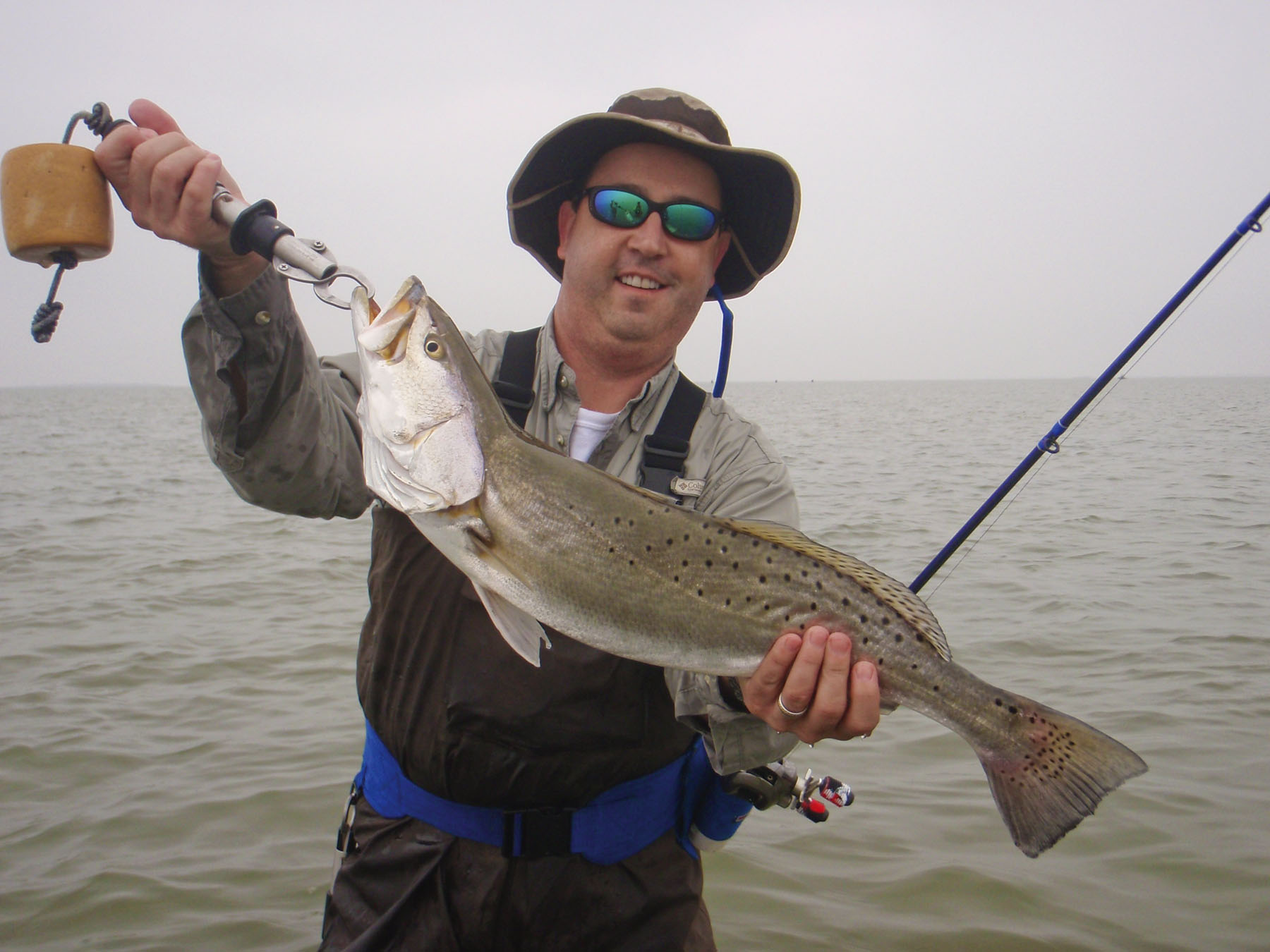 Our clients have been catching trout like this on almost every trip.

Ironically, and in a good way, there's just not a lot of new "news" to report from Port Mansfield. Almost every month I have been bringing you pretty much the same old story "fishing is great, throw tails and Corkys in color changes and topwaters when the bait is on the surface, catch lots of great fish and have fun." Inasmuch as you may be growing tired of that same old report; that is honestly and truly what's been going on down here. But think about it for a second...how awesome is that?

In addition to being blessed with the best fishing on the Texas coast, we were also blessed that we escaped a serious fish kill event during the February freeze event. We made several long boat rides to investigate the damage just as the temperatures began to rise and we found quite a few mullet and hardheads floating dead in and around the East Cut along with scores of dead and cold-stunned sea turtles. We found only a very few gamefish floating although we did find a monster trout that weighed a bit over ten pounds floating in the Saucer area. It is always very sad to see such a great specimen meet its end that way. This is nature at work and there is nothing we can do to prevent it. It is however a great reminder that we should strive to conserve our fisheries on a daily basis.

I want to thank TPWD for the fishing closure enacted in the Port Mansfield harbor during the freeze and the near-complete voluntary cessation of barge traffic on the ICW. It amazed me that as soon as the closure in the harbor was lifted, a horde of folks lined the banks to take advantage of the fish that remained there for almost a full week. And even though barge traffic was greatly reduced via voluntarily shutdown, a few tugs went through the Land Cut during the lowest of temperatures. Perhaps we can do better next time.

Our water is holding a beautiful clear green during lower winds, but it is not holding so well in strong wind due to the loss of grass from last year's freshwater flood. The good news is that the grass beds are recovering rapidly and should soon be back to normal very soon. Stingrays seem to be showing earlier than normal as is the slimy, green filamentous algae we always see in springtime. Wear your stingray guards and be prepared for lots of salad on your lines and lures.

Flounder numbers seem to be on the rise. Two to three flounder per trip have become common lately. I'm not sure whether this should be attributed to the reduction in flounder bag limits or a natural cycle on the upswing, either way it's really cool to see the flatties.

Here's something new and different for you polychaete worms in the LLM. Everybody should by now understand that last summer's floods have created an explosion of marine life in our otherwise hyper-saline lagoon and lately we have been seeing swarms of polychaete marine worms. I had no clue what they were; thank you Wikipedia. The trout and redfish are gorging on them and what a mess they make on your boat and in your ice chest.

For April, expect continued excellent fishing, lots of big trout, big tides, lots of wind, and lots of fishermen as the word is out about the quality of fishing going on down here. Hopefully everybody will remember their manners and will be courteous to their fellow fishermen. With so many places producing great catches there is simply no good reason for crowding and cutting off. Display the respect you hope to receive and try to be tolerant of folks who aren't there yet. Hopefully by setting good examples and avoiding temper tantrums we can get everybody up to speed on this.

Speaking of manners and respect; it won't be long until we'll have a major tournament or two in Port every weekend. I would like to encourage tournament directors to help conserve our resources during these events. A tournament stringer per boat rather than each participant taking a daily bag limit of trout including one over 25 inches would be an awesome start. Many say they only do this once a year, but when hundreds or maybe even thousands do it "once a year" the problem is magnified.

Here's to good fishing, responsible use, and many days on the water when dreams are fulfilled.