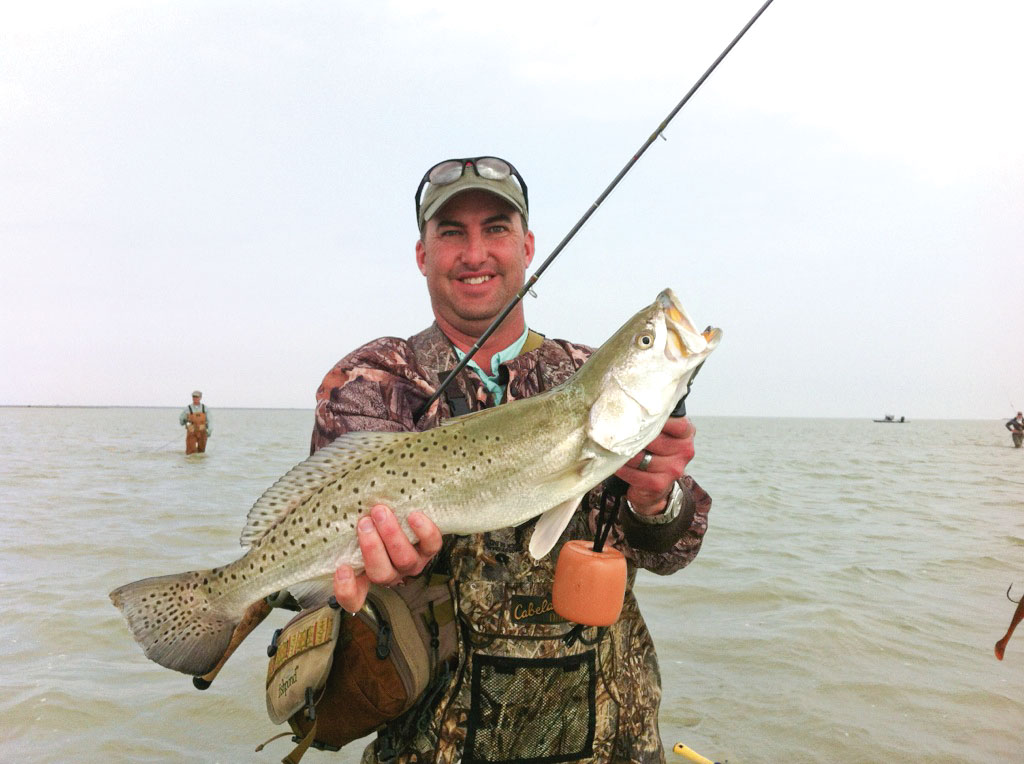 It's always an adventure anytime we go fishing and this past month brought more than a few challenges. We had several excellent days along with the normal good ones but there will always be those unexplainably tough ones in the mix. If it was always easy lots of little girls like me would do it for a living... LOL! Patterns are stabilizing and I hope the early signs of spring continue to develop and give us great fishing.

Over the past month we often found conditions requiring extra creativity. We saw some of the lowest tides I've ever witnessed and many surprises appeared that I never knew existed good and bad! Thankfully my Haynie Cat has enabled me to get around where few boats could go. Most everybody understands that low tides concentrate fish in deeper depressions on the flats and naturally we took advantage when we could. Finding them wasn't always easy though and some days I was amazed to find trout (big trout) and redfish cruising chilly, ultra-skinny flats. I never would have believed it if I hadn't seen it. Unfortunately, they were sometimes in water too shallow to offer much opportunity.

Another challenge was a series of strong fronts followed almost immediately by equally strong southern blows. The lack of recovery time in-between makes for tough fishing; mostly tide level and clarity related, so we just had to go on faith and other subtle signs, some days were luckier than others. Believe it or not we actually had several great topwater days through all that craziness.

We found some of our best trout in shin-deep water, especially during warming periods after strong northers. The more sun we had the more they pulled up and ate for us. Strangely though, many of our better bites came later in the day. Few will stay as long as we do, but if you gave up early you often gave up disappointedly. If we want to catch in addition to a long day of casting practice, you sometimes have to be willing to invest those "extended" efforts. Bottom line to this is that big trout can be very picky and never expect anything normal going into full moon.

Several things seem to be arriving earlier than expected this year. Along with our town deer shedding antlers early we have been seeing trout with egg development coming weeks ahead of schedule. Another clue of an early spring has been schools of cownose rays, skipjacks, and an uncommon number of shrimp popping from the grass while wading. Stingrays also seem more numerous than I ever recall for early March.

Thus far we've caught no nine or ten pound trout although we have been able to get our clients on a decent number of heavy sevens and solid eights. There has been no hard and fast rule bait-wise for these better trout, everything from tails to Corkys and a few on top depending on the water depths and conditions. You just have to go with whatever seems to be working at the moment.

Redfish have been fairly plentiful. We've seen legal fish (within the slot) pushing ten pounds, something you don't see often, and when you found one or two you usually found a school. More good news is the number of eighteen to twenty inchers in the system, and being that they can grow an inch per month under good conditions, I say look out for super late-summer and fall fishing!

By the time you read this spring should have already bust wide open. Spring equinox occurs on March 20 which should bring quite a bit more water and many new areas to explore. Look for lots of trout and reds on the sand-grass flats along the east side of the Laguna and also bunched on the ICW spoils. Rapidly developing grass will improve windy day clarity which gives lots of options. Hopefully the north wind will soon become infrequent with south/southeast more of the norm. Sometime during the month of April we should be able to shed our waders until next fall... Yay!

We will have to battle what seems endless spring wind at times but the bottom line is that if you don't go you won't know. With the increasing amount of bait we see daily in the Laguna and the big fish we have seen recently on the flats we should be set for excellent spring and early summer fishing.