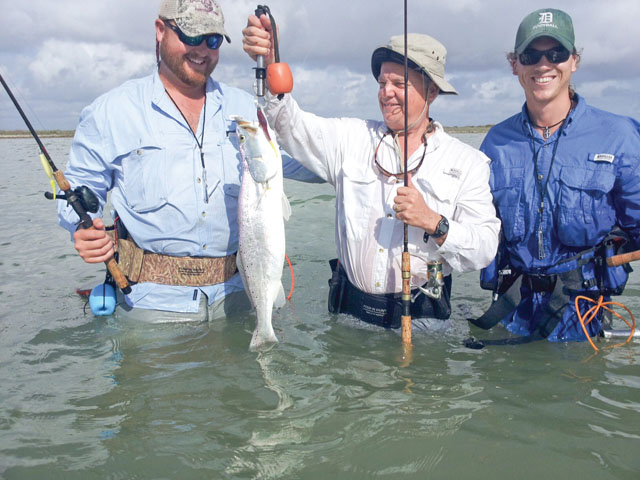 - The way things are shaping up, April promises many happy anglers.
Despite an often cold and dreary winter, fishing remained on a high note down here on the magical Lower Laguna. Predicting spring weather and water conditions is risky business at best, and we'll never really know until it arrives, but chances seem high that our good fortune will continue through April. Late-February through early-March, significant northers, with most occurring back to back, had even the toughest of us canceling charters. Between the frigid events some stellar days were had, and solid catches find us very optimistic for a solid spring.

Our trout fishing was mostly concentrated on ICW spoil edges and flats that tapered to the deeper water of the channel. Following a cold spell they were typically deeper for several days and then working shallower as the warm ups progressed. The joy of seeing the number of very large trout cruising shallow over light-colored sand, and almost zero fishing pressure to disturb them, certainly ups my expectations for what is to come.

During the clement non-grinding days, limits of trout were found consistently in the areas mentioned above. Tails and Corkys were our top producing baits, and even though we tried often, the surface bite never happened with any real consistency.

The annual ICE tournament was held in Port Mansfield the last of February and these poor guys fished during some very ugly conditions. "Dirty-thirty" due south winds prevailed both days, and I had one friend who compared the water color to a Yoo-hoo chocolate drink in a blender. Despite the awful wind the fellas were faced with, some really great trout were brought in, and more than two trout were knocking on nine pounds. I prefer not fishing these sort of conditions anymore unless I just have to, but its great knowing it can be done. As we have always said... "We ain't scared of no stinking wind!"

When faced with slow periods during the past month we naturally sifted through an assortment of lure types and colors. But in the end, the way you presented the lure was more important than type or color by a wide margin. Even in varying clarity conditions, when they were down and not feeding aggressively, you could throw whatever you wanted as long as you worked it down to them, and dragged it across their nose. When they were holding on grass beds or at the edges of potholes, the best presentation was hopping a soft plastic just enough to keep it running across the top of the grass blades.

However, when it was finally "time" everybody caught fish on mostly what they wanted to throw, except as I said earlier they have been very reluctant to strike on the surface. It seemed that when they were down and sulking they were on solid grass and when they finally decided to feed they moved to knee-deep grassy potholes surrounding large depressions. What was reinforced is that even when you know you are on fish it is not always going to be easy, and rather than move it is always better to fish smarter. Also confirmed was that those who show up with realistic expectations and properly working equipment prevailed. Many thanks to my sponsors keeping me and clients ahead in the sport.

Predictions for future months, especially April, include new water, and continued opportunity for heavy trout and legions of redfish. Besides trout, redfish have been numerous when they invade the flats, but we all know they can disappear for days as well. Moving with the fish is the biggest factor in springtime and it is especially important to remember the "wave in the bathtub" effect. Significant southeast winds late in the day move water one way, and diminished winds in the mornings allow it to flow back the other way. As levels change fish move with it and so should we.

One thing's certain; it's going to be windy, so do pray for southeast. At least with the Laguna's famous sea grasses rebounding we have the promise of better clarity, even during really strong winds. In conclusion, fishing has been great and should continue to be so. There is no reason for that to change as far as I can tell, and I look forward to seeing y'all down here in paradise.