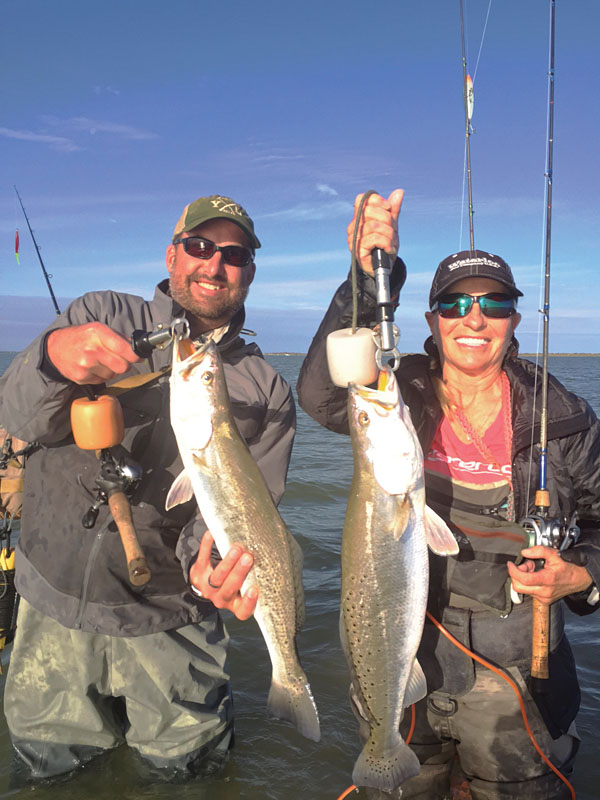 Excellent examples of biggies in the skinny!

I have had quite a busy and awesome time on the water since my return from Costa Rica. While that is a wonderful thing, it has been none-the-less very demanding physically and mentally. The redeeming feature of long busy stretches is that the fishery of the Lower Laguna remains so giving. So even when I'm all worn out the great Mother Lagoon continues to bless us with so much opportunity in so many places.

The realization that the next cast could bring a lifetime fish for a client, or me, is a huge part of what keeps me going. Giving a VERY mild winter, our spring patterns are already present a full month ahead of schedule. Knowing where the fish are is always a big step up, but no matter how many fish might be available the catching part is always highly dependent on the weather and moon phases and the way in which it effects their feeding style.

Knowing this, you might should throw in some good planning (and a bit of luck) to insure consistent catching. Speaking of planning, do your best to organize a game plan before heading out. This time of year, wind direction, velocity, atmospheric pressure and temperature all have to be considered. Down here we live or die by the wind, and when the forecast call for 10-to-15 we pretty much know to add them together to get a better idea of what to expect.

There are plenty of areas in our bay system that can hold decent clarity despite strong winds, especially during bull tides of spring. Just know that there is a large difference between south, southeast, and a south-southeast blow. Tiny degree changes on the compass can totally wreck a lot of areas, so choose wisely.

Many of the productive areas during late-February and early-March were not the postcard clear waters Port Mansfield is famous for, but rather in murky water, with scattered grass beds, where the first clue was nervous baitfish. Most of the shallow areas we found holding concentrations of bait also held some good size predators. Catching them required much more than luck, though, confidence combined with the willingness to stay with it was the key.

Faster action may occur out deeper, but up in the skinny the next cast could very well bring your best fish ever. Wade slowly, be confident they are there, and stay alert to every sign. Above all, keep casting.

April will mark some significant changes. Some very exciting and some will be the typical and frustrating challenges of spring. April is also one of the better months to expect heavier trout. Fat fish laden with roe are often available to wading fisherman stalking shallow shorelines and submerged spoil banks. Spawning activity will have them feeding voraciously and the signs will be small slicks popping in the shallows, and bird activity. The fishing game is very good when you find these.

I'd like to emphasize that large topwaters which I wrote about last month are still awesome producers, but let's not forget that much of springtime forage is quite small, and I am seeing that already. The flats should be teeming with small shrimp, crabs, and several species of juvenile baitfish. Competing with these natural foods can definitely lean toward the challenging side. Last spring the smaller Norton Sand Eels Junior and smaller to mid-sized topwaters caught fish when little else would. Your lure doesn't always have to be big and loud to get big results.

Remember, when the wind blows hard in the Laguna, it moves water from somewhere and pushes it somewhere else. As mentioned before, planning and timing is critical, so let's be patient and work to catch the fish we know are there. Good luck and here's to you getting your personal-best fish in spring 2016!