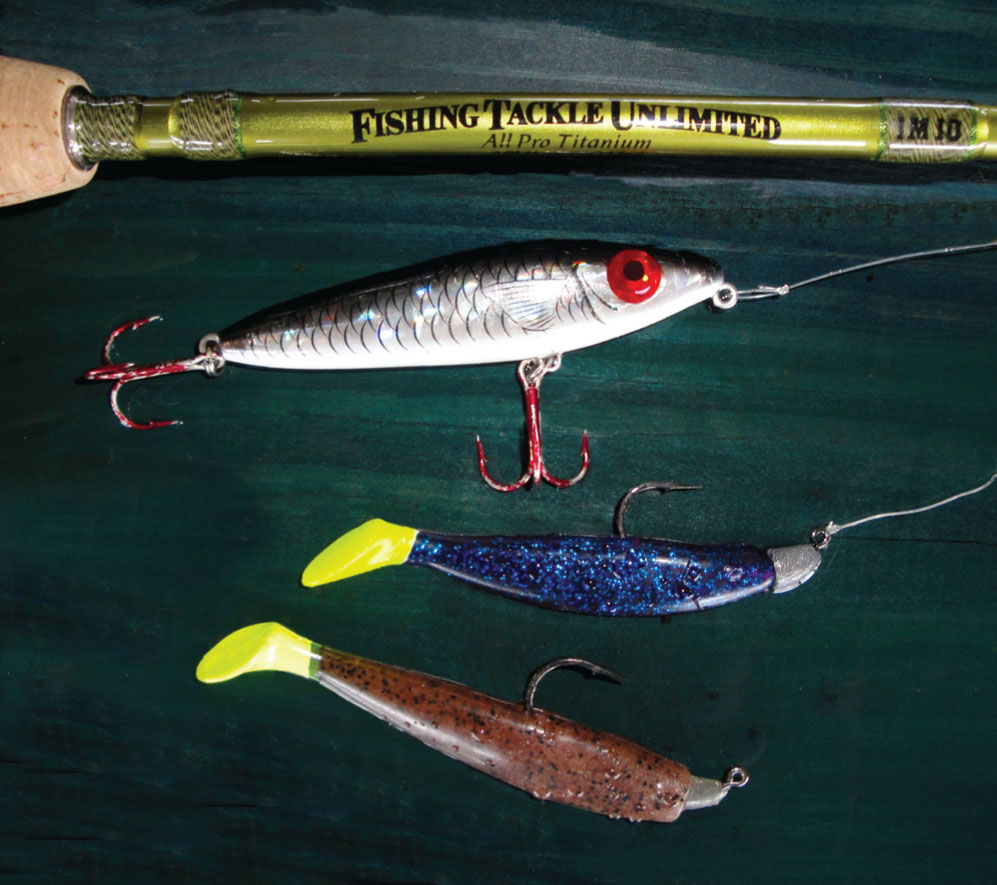 Topwaters are the most exciting but soft plastics will almost always bring more strikes.
The water is still clear, fishing is still good, and they're still blasting the heck out of top waters. Even with oppressive summer heat catches are running well above normal and our trout are sporting impressive weights. Of course we still get a slow day now and then but expectations are running high every morning as we leave the harbor. August should be another great month with the only threats being a churning gulf or too many churning propellers. Whoever said a five fish trout limit would drive the fishermen away might need a new crystal ball.

August here in the Lower Laguna is known to bring exceptional redfish opportunities. Yes, that's been happening, but quality trout are still commanding most of the show. Low winds and cool mornings made for some exceptional surface action during July and some excellent fish were caught. Curious, but even with the abundance of shrimp, where you might expect plastic tails and smaller plugs to be best options, larger topwaters are still getting hit with reckless abandon and even seem to be preferred. When the timing is right, big mullet and other large finfish are still high on the menu. Just yesterday I was skiing in a thirteen-inch trout when out of nowhere an absolute behemoth of a trout nailed it; the second such occurrence in as many weeks. Dock talk says I am not the only one to see this.

Last week I did a little experiment after missing several good blowups. The wind had picked up and, although the fish were still coming to the surface. they just would not commit. I tied on a plain old Top Dog, a bait that I just haven't given a full chance in a long time. She Dogs yes, when conditions call for it, but out of curiosity I pulled out the less obnoxious Series III 94MR 21 that looks about as fishy as they come. This lure floats lower than the She Dog, especially the tail end. Boils and swirls turned into take-downs and we caught a number of strong trout including a few between 27 and 28 inches. Although I would much rather emphasize skill over selection, there are certainly times when just a small change can make a big difference. One of those 27's weighed almost eight pounds, healthy for any time of the year.

Also of note has been shark encounters. Twice recently I have had them swimming within feet of me and following my lures. No one has ever been hit to my knowledge, but finding yourself a few feet from such a powerful and dangerous fish tends to make things exciting. I'm thinking of longer stringers with quick releases.

Redfish are plentiful but have been tough to stay on lately. Consistent catching has been a challenge. Deeper depressions on the flats with heavy grass beds have been the most consistent. Calm days make finding them easier as we can spot their wakes from quite a distance. Some longtime locals blame the boat traffic for running off the flats.

August will bring some changes, and while we can't predict all of them, we do know that overall water levels should be very low early in the month. Boat traffic should decrease as school starts back into session. Less water for fish to hide and fewer fishermen competing for them may improve our situation even further. We would look forward to seeing schools of reds on the flats and staying there longer during the day. Sight casting to big bruisers milling in shin deep water is one of the most thrilling experiences we can have, and by all counts, we might expect that to become more predictable during the next few months.

Let's talk a bit about lures. While topwaters are the most exciting, soft plastics will almost always bring more strikes. When activity drops you need to drop too, and the Hogie Major Minnow on the 1/8 ounce Hogie springlock jig is a great combination. Twisting the bait onto the spring helps it in position strike after strike. Another one to keep your eye on is the old Kelley Wiggler soft plastic swimbaits. We hear the Kelley
Wiggler brand has new owners and will be making a comeback. When the bite gets tough and fish get finicky, a soft plastic swimbait is my go-to lure.

Enjoy the rest of the summer; go when you can, take only what you need, and leave the rest. Fall will be on us before we know it, and with a little luck and a lot of care, the magic of the Laguna will continue for all of us.