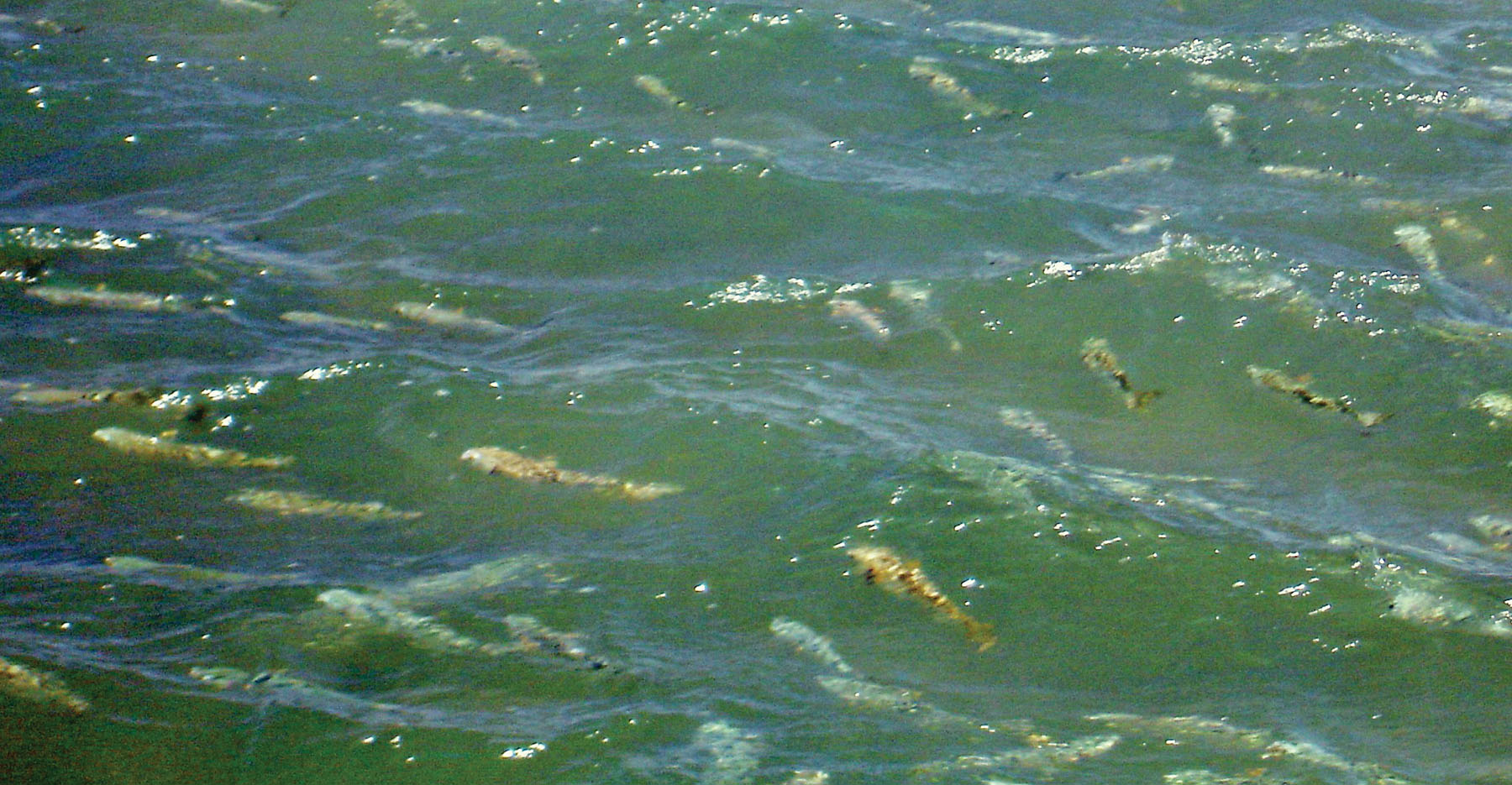 Rafts of mullet are easy to find and the trout are right there with them.

All indicators appear on track for another great late-summer season for Lower Laguna anglers. As of this writing the winds have slacked, the water remains mostly clear, and the fish have been cooperating. Of course all of this is based on remaining lucky in the tropical weather department.

Trout action still rules most of the dock talk. Except for those strange and unexplainable no-bite days, limits have been fairly easy. Nice eating-class fish running 18 to 20 inches have been common most everywhere from shallow sandy shorelines to grassy flats and also along deeper breaks. Much of the Laguna is awash with large rafts of mullet, find them and you will likely also find the trout.

Although most of our average trout have been hanging near large concentrations of bait, the majority of the highly-coveted above-average specimens have been found away from all of that flipping commotion. While summer does not typically produce the heavyweights we see during cooler months, long fish are still trophies as can be seen in the accompanying photo of Lisa's near-thirty that weighed close to eight pounds. I must say that I have never seen so many good trout cruising the shallow sand. Sightcasting to heart-stopping trout has been very do-able lately, nearly every day in fact when the conditions are right. August should even be better.

Redfish action in the shallows has been spotty but schools are beginning to show out deeper. Deep is relative, and down here it means anything beyond normal wading depth; say three to four feet. That should change soon and we look forward to better shallow water opportunity in the coming weeks.

As you may have already heard, flounder numbers seem to definitely be on the rebound and lately we have found them consistently enough to warrant targeting them specifically. The steadiest action has come from cleaner bottoms where you can drag a tail; oilfield cuts, edges of the East Cut and ICW, spoil banks, and sandy bottoms near current-swept shorelines. They are getting larger on average with some running close to twenty inches; fat and healthy.

Another bonus has been the schools of black drum. They can often be found creating murky spots in otherwise clear water during the afternoons and toward evening. Scented baits such as Berkleys Gulp! pulled slowly across the bottom or fished under corks will be taken readily when they are feeding. We have been seeing family groups putting their kids on them, just having a ball, and black drum offer excellent table fare. Do not be surprised when your cast is met by a solid trout or redfish while targeting drum as these guys sometimes all ride together.

August, despite the heat, can be an intriguing month. Overall water levels should be at seasonal lows in the early weeks, and then building steadily through September. I expect to see redfish dominating the flats with frequent tailing activity and lots of wakes in the shallows. With continued calm wind, redfish should be easy to spot during early morning boat rides across the flats. Trout action should remain steady. Smaller, more subtle topwaters and tails will get it done in the shallows while larger and larger offerings will be blast to throw to trout that are holding in waist to shirt pocket depths.

Early mornings are generally considered best, but never discount late afternoon and evening when most fishermen have already returned to the dock. Afternoon wind often creates streaks and color changes, especially along ledges and breaks where trout retreat to find cooler water in the middle of the day. Offering a mixture of plastics and surface plugs to these laid-up fish will be necessary to discover what they want and how they want it. Expect them to slide back up toward the shallows and feed more aggressively as the sun dips to the horizon.

A tidbit of local news... Folks coming to Port Mansfield should be aware that here lately, gasoline is not always available at the marinas. We all wish it was better but for now I wouldn't count on being able to fill my boat in the harbor every morning. Trailering to the filling station at the edge of town is often necessary. This situation could be very disappointing for anglers coming to Port Mansfield by water and also those hoping to make a re-fueling stop while en route to other destinations.

August looks to be another great fishing month, so come on down to Port and getcha some!