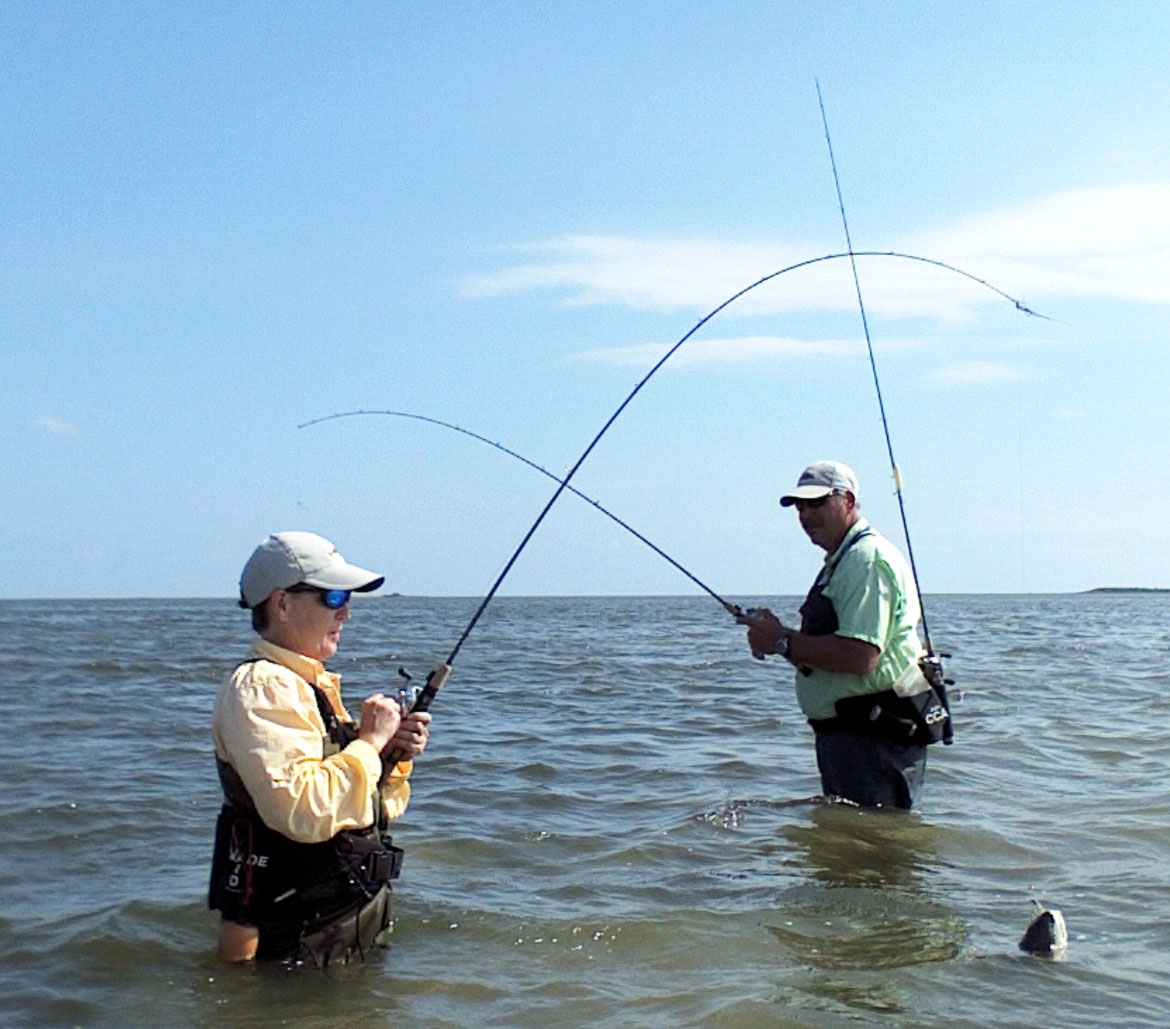 Richard and Brenda Cole from Sweeny, Texas enjoying a good late fall trip.
The phrase "teeming with life" can only begin to describe what we are currently enjoying here in the Lower Laguna Madre. Ducks are infiltrating the marshes in ever-increasing numbers and those high-honking geese are mere omens of what is to come. Everywhere you look you see wildlife in motion, and that includes the fantastic view from an elevated center console. Anticipation is high as we move towards what may be some of the best fishing this unique area has to offer. For a true outdoorsman, December has it all.

Since the last issue of TSFM, we have enjoyed some excellent fishing on the flats. Right on cue our redfish started becoming more predictable, and most recently some colossal trout have started to show themselves. No, there isn't always a strong bite. We struggled on many days, but overall we accomplished what we wanted, which always is putting good people on great adventures.

A typical good session could be summed up by the recent adventures of Richard and Brenda Cole from Sweeny, Texas. They came to celebrate Richard's fiftieth, and in a colorful display of angling enthusiasm, his calves proudly sported his new and only tattoos; a trout on one and a redfish on the other. Back to their trip, Richard and Brenda were down for three full days of dedicated catch and release. They were out purely to have fun. Of note, we are finding more fishermen such as these who voluntarily remove the pressure of production, seeming to not only catch more fish, but appearing to have more fun doing it.

An overabundance of bait often makes an artificial bite challenging. The preferred forage lately has been shrimp. This is hard to compete with, but we have found the Brown Lure sea devil in Cajun pepper to be irresistible when little else will work. Aggressive retrieves held high in the water column have been fooling prowling trout while slowing it down brings strikes from grass grubbing reds. Color changes, pelicans, ospreys and gulls tell us where.

To offer a December fishing prediction; if the weather we have been getting will continue we will again have opportunities at career best fish for our clients. We used to tell our trophy trout enthusiasts that January would be the kick-off but lately we have been doing so well in December that we advise them to come earlier. So far our weather prognosticators indicate a mild winter. If this turns out to be true we'll be trophy hunting in shirtsleeves and it's hard to dream up anything better.

Big trout strategies will include working distinctive drops near deeper waters, especially right after a good norther. Soft plastics on 1/4-ounce heads, Corkies, and other slow-sinker plugs worked off the drops are standard approaches when it's cold. There are many such areas to work from Port going north to the Land Cut. In finding your own areas to probe, Google Earth rocks as far as locating high potential depth contours.

Many big fish are caught south of town in the muddy potholes. Remember that big trout will often pull up shallower than we might first think. Down here, they can often be seen sunning during winter afternoons. A weedless rigged plastic presented slowly can be a good tool for pulling some of these unsuspecting fish out of their warming lairs.

Besides the fabled, thick-bodied speckled trout of winter, some of the best redfish action occurs during these colder months. I have to wonder who put out the memo that all of the bigger redfish leave the bay to spawn in the fall. Some of our most memorable big redfish days occurred last year when we thought we were fishing for trout. Large concentrations of big reds can readily invade the warming back lakes and flats. When we found them they were usually caught on whatever baits we threw. Some of the best trout of the year were also found with them, so not only can there be elbow wrenching action, the potential for a behemoth trout always exists in large groups of reds.

Making fishing predictions can really take you out on a limb, all we can ask is to be able to get out there and apply what we have learned, and then hope for the best. For this December, one thing we hope the best for is our water quality. Last month I mentioned a nuisance algal bloom. It is still here, and the water continues back and forth from clear to horrible. Who knows what the immediate future will bring, but whatever it is, we will still catch our fish. However, it is probable that better flow from the Gulf through the Port Mansfield Channel might help matters, both now and in the decades to come. We all hope that someday the silting in of this important artery will draw the attention of those who care about sustaining our fishing future. Keep us in mind down here. Your kids would also like to share what we have enjoyed, and the Laguna Madre has the power to bind a spell on anyone who appreciates good times, especially in crystal clear water.