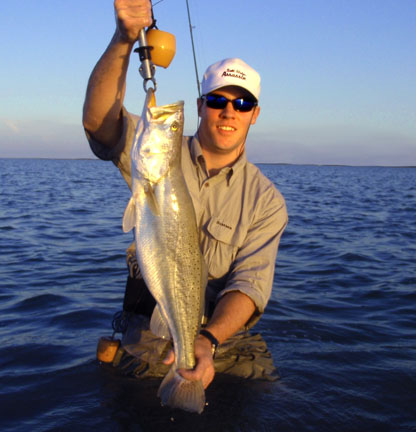 Who knows all the reasons why, but both trout and reds seem to be adding weight earlier than normal this year. Our trout started sporting body weight in November not usually seen until January or February, and even more impressive is that we are seeing a surprising number of large fish using the shallows on almost every trip. Standard patterns have prevailed of late; usually starting behind grass lines early and then moving toward progressively deeper structure as the day wears on. We are finishing up most days in thigh to waist deep potholes with heavy grass. With prevailing light wind the entire Laguna has been wide open.

Lure choices have been wide open too. Fish have been caught on everything from Corky lures to spinnerbaits and even weedless bass frogs. While experimenting has been fun, out of habit, I'm sticking to my proven favorites; the Brown Lure Devil Eye for tail work and either a Skitter Walk or She Dog on top. Just like lure type, lots of lure colors have been working as well. I'll catch them on plum plastic while clients may do just as well on white. It's more about getting on good concentrations of fish and figuring out the retrieve. Of course good equipment that will keep a lure in the water and a willing attitude to stick with it is always a cornerstone of fishing success.

Redfish have also been providing consistent action, gorging on crab and shrimp in shallow grass. Speaking of which, our water is loaded with bait. There are more crabs here than in recent memory. We have been pulling in several per day on slow-worked plastics; unheard of for a long time. The abundance of crabs has really attracted redfish, and a large shrimp crop has most late afternoons filled with flocks of wheeling birds.

Lower slot redfish can be found in good number on many area flats, readily taking spoons and tails. There are also several areas holding upper to oversized redfish, and getting into these with topwaters has been a literal blast. Even though the numbers are strong, it is curious that we have seen very little schooling. The traditional water pushing herds of the fall season just didn't seem to happen so far this year, none-the-less there are still boaters out there cutting up lots of water looking for them.

Outlook for a solid December seems promising. As overall water levels drop fish will become easier to pattern. Whoever said all of the big reds leave the bays in winter must be staying indoors. Some of our absolute best redfishing success happens in winter as schools of big fish stack in small depressions and guts. Wading into them can be all your wrists and elbows can handle and this year should be no exception. As fun as this can be, I am more excited about our big trout potential.

As mentioned, we have already been catching fish that are heavier than normal for this time of year. Many clients get their personal best fishing with me down here from January to March. For those of you having that goal you may need to rethink a bit and come earlier. It's already going on. You can bet I'll be grinding every day that will let me.

Final news is the dredging of the East Cut. The shoaling at the mouth of the jetties should be cleared shortly after the first of the year. That should provide greatly increased flow, just in time for interesting spring season tides.