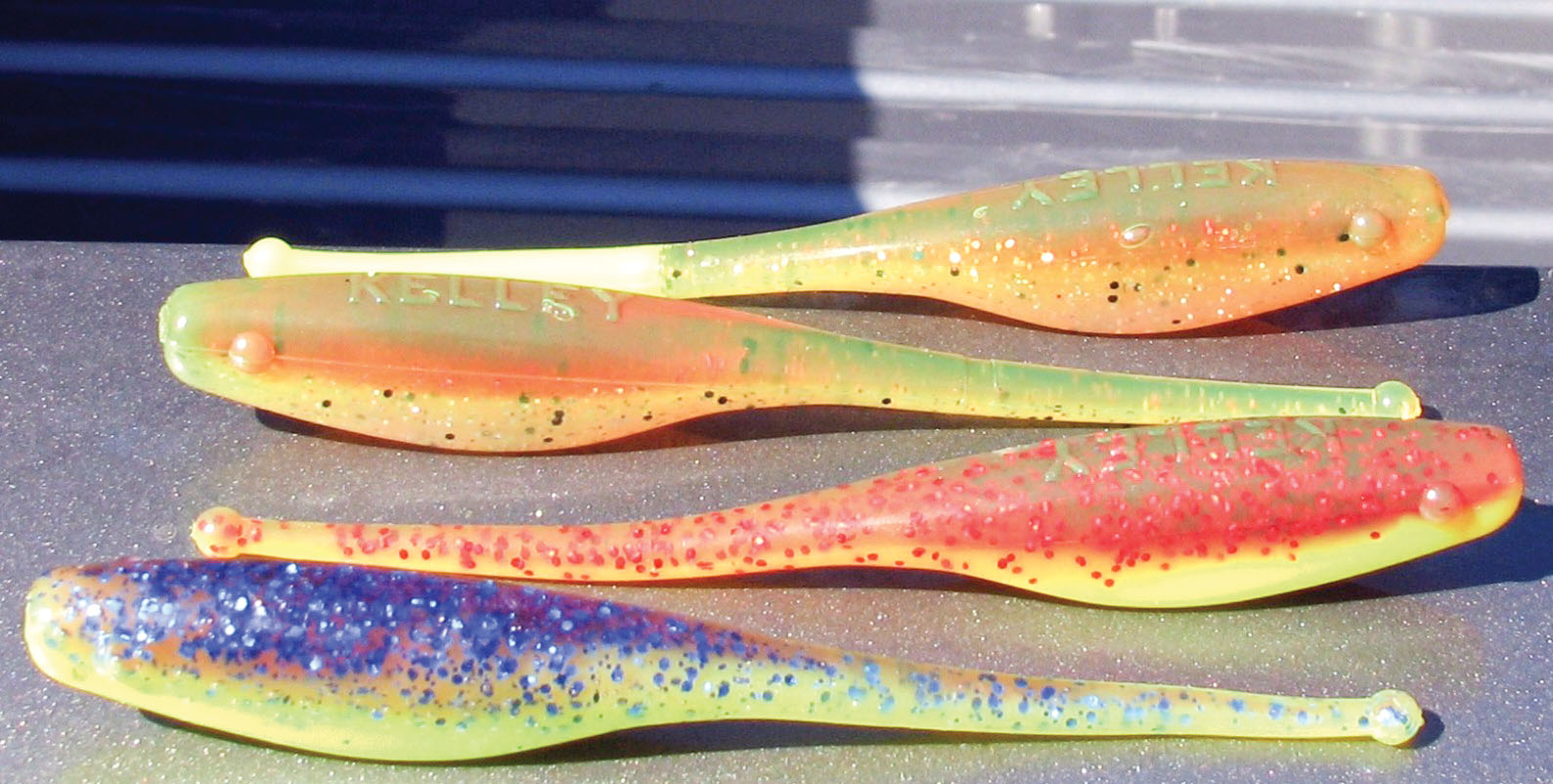 Exciting new colors from Kelley Wigglers.
Most folks who frequent Port Mansfield lament that my last few reports have not quite been the raving ones of the past. This years endless summer had all of us mysteriously singing the blues at times, yet between those slow periods some downright great catches were still managedespecially for those savvy enough to ferret out new patterns and tactics. However, its apparent that something had changed and changed rapidly. How could we go from extreme opportunity one year to basically scratching the next?

Understanding that all of nature goes through cycles, the question here is why, and why now? Could it have been a change in forage, an abnormally warm winter, sea grass alterations finally catching up, or perhaps increasingly effective pressure? Again, who knows, but what we do know is that things are finally getting back to normal and we are again starting to sing songs of praises instead. I am excited!

Happy to report that as of this writing fall is here and winter patterns will certainly be in full swing by this reading. We are often asked what months are favorites to fish in the Lower Laguna. Although many surprises and amazing opportunities exist all year, the easy answer for me is basically anytime we need to put waders onrealistically, thats fully six months out of most years. Fishing is simply much more predictable when we are able to work with water level and temperature swings associated with northers. Cooler waters also tend to have fish staged within easier wading range more often, and the past two fronts have done exactly that.

Gratefully, a pre-Halloween norther quickly dropped the water temperatures on the flats from the low-80s to high-50s. The fish responded accordingly and new moves were obviously triggered. Redfish we havent been seeing finally bunched up head to head, bigger trout pulled up shallow and flounder started their annual move towards the passes. Another positive, aside from increased larger catches, is that an abundance of juvenile trout speak well of the future.

The overall water quality is also inspiring, and it seems that many grassy areas denuded by the freshwater flood of 2010 are strongly on the rebound. Interesting is that most of the lost grass beds were turtle grass and these are now being replaced by the more common shoal grass, which is more beneficial as far as retrieving a slow-rolled lure is concerned. It looks like all is leaning strongly towards the positive along the southern Laguna front, and once again we will soon own the most premier fishery along the coast.

As far as catching itself goes, aside from sporadically tremendous topwater bites, plastic tails on 1/8 ounce jigs have been consistent as usual. Two particular baits I am excited about are new patterns from Kelly Wigglers. We have been field testing a currently unnamed scheme, electric blue on top with a chartreuse bottom (no tail dip), and let me tell you it has been getting absolutely hammered in darker water. Another new color we want to call Lagunaflage is deadly in clearer environments. Its basically similar to motor oil on top, which totally changes its appearance under different lighting, and with a translucent sparkled bottom called sand. It just looks like something that needs to be eaten and doesnt seem to spook fish in our many sensitive, clear-shallow situations.

To summarize my predictions for December, many things are again pointing towards some larger-than-life sessions. We are seeing a marked increase in larger trout using the shallows and redfish are finally showing up in the skinny as well. The chase should be easier with predictable pre- and post-norther tactics routinely coming into play. We know the fish are there as we are seeing them, so it will become a matter of being there when it's time. Traditional areas to consider are those flooded by southerly wind before a front, deeper depressions immediately after, and warming/bait-filled areas during norther recoveries.

Its the holiday season and spirits generally run high, but I cant wait for some high-spirited adventures on the water as well. We all have our own visions of what a great trip is, but as for me, big trout and reds blasting lures up shallow make for a fine image of what life is all about. Did I mention I was excited?