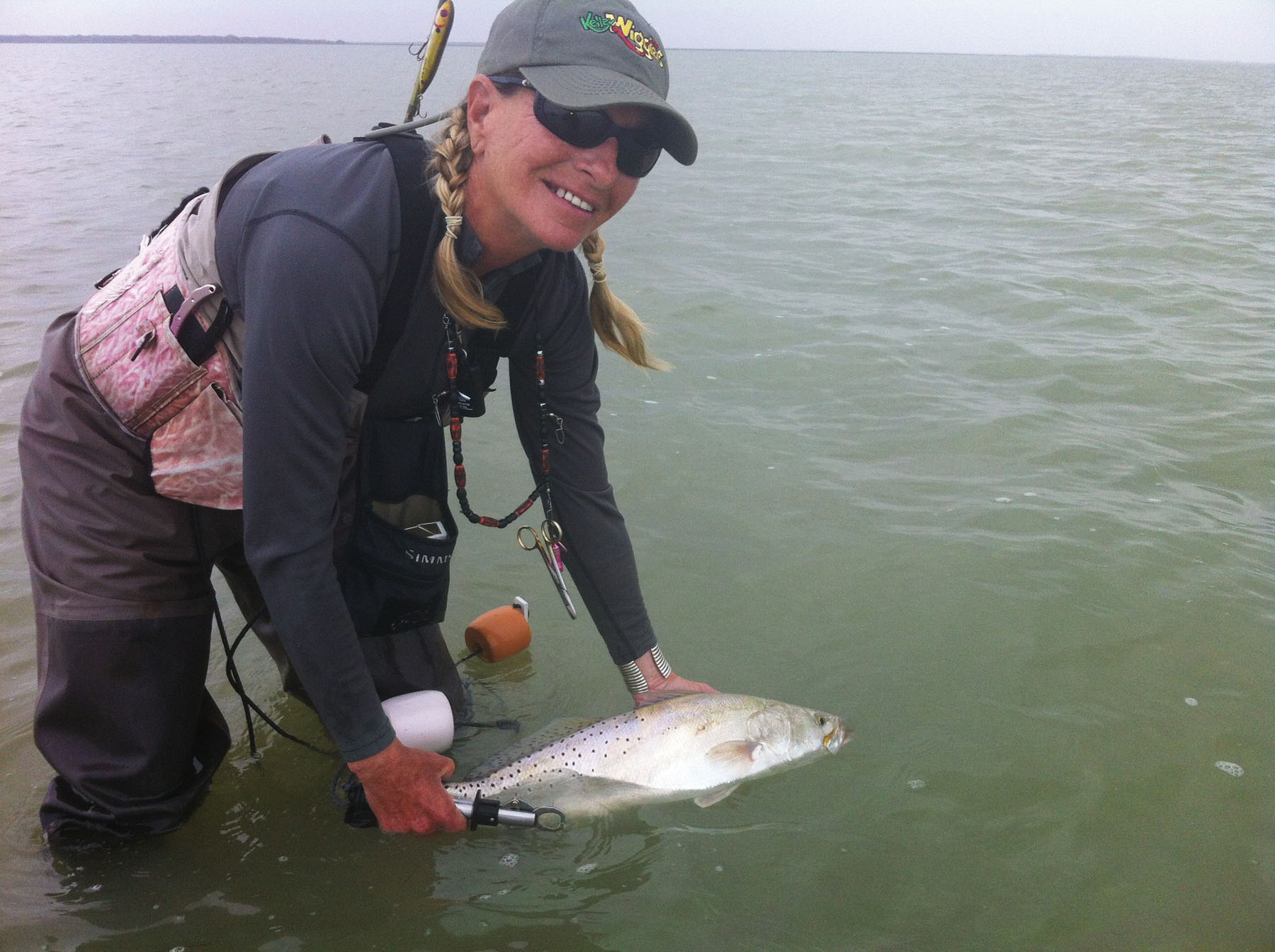 Fishing is fantastic! For several weeks our catches have consistently met or exceeded our expectations for this time of year. Numbers of reds and really nice trout have shown in most places that made sense for the conditions and a consistently strong topwater bite has been putting smiles on lots of client faces. Signs are pointing towards a strong winter season.

Since the last issue of TSFM, we have enjoyed some excellent fishing on the flats. Right on cue our redfish started becoming more predictable and most recently some colossal trout have started to show themselves. I cannot say there was always a strong bite, and on many days we just had to stick in there and wait for it to happen, but when it did it happened big!

A memorable trip rewarded one client with a trout weighing eight pounds and hitting the coveted thirty-inch mark. On that late-October trip, two over-sevens were also caught. Early November we had two fish at twenty-nine and almost thirty. For this area and this time of year, that is strong. This does not always happen in October and early- November, and that is why I am quite optimistic for the winter trophy season ahead.

The large mullet aggregations are still here and slowly but steadily making their way out to the beach front. We are always targeting bait but here lately a few less mullet milling about the flats might encourage the trout and reds to take a lure more readily on the slower days. The small trout I have cleaned lately for clients have lots of mullet and shrimp in their stomachs. We know the shrimp will be gone soon, and if the mullet migration might cause their numbers on the flats to dwindle a bit, we might see even better fishing. When this happens I expect the trout will relocate from hard sand to soft-bottom grassy areas, working harder for something to eat. I am looking forward to following them to the grass-rich flats and shorelines. Smaller topwaters will definitely get their attention.

To offer a prediction for December–Kickoff month for trophy trout used to be January, but if the indicators I'm seeing are accurate, I think we will get an early start this year. Long term weather predictions are calling for a cooler and wetter winter than normal. If this comes to pass, December should be filled with lots of career-best specks.

Big trout strategies will include working distinct drop-offs leading to deeper waters, especially so after a good hard norther. My standard jig weights are 1/16 and 1/8 ounce but when the drop is steep I sometimes switch to 1/4 ounce for a faster sink rate when exploring. Corkys and other slow sinkers will also get the call often. There are many spoil banks along the ICW from Port all the way to the Land Cut. Utilize any good satellite app and you should be able to locate the type of structure I am describing.

Also remember that a couple of days post-norther, big trout will pull up much shallower than you would ever think. There are many shallow, muddy pothole areas south of town and up north past the Oak Motts. We frequently see large trout sunning as the temperatures begin to rise on winter afternoons. A weedless-weightless plastic or softly twitched surface plug can pull some of these fish out of what I call mini-hot tubs.

Besides the sought after big trout of winter, some of the best redfishing occurs during these colder months. Large concentrations can invade warming back lakes and flats. When found, they can usually be caught on whatever lures your throw, and some of the best trout of the year are often with them. Winter can offer sore shoulders, elbows and wrists when the conditions are right.

Early winter the past few years has been complicated with large patches of brown tide and I'm certainly praying we do not have another algal bloom to deal with this year. So far the clarity is great with only a few very small patches of brown water here and there. We will know for sure as soon as the big fall tides move out. And even if it does come our way, we will still find a way to catch our fish. If December finds you on the Lower Laguna, put your trust in pelicans, gulls, ospreys and color changes.