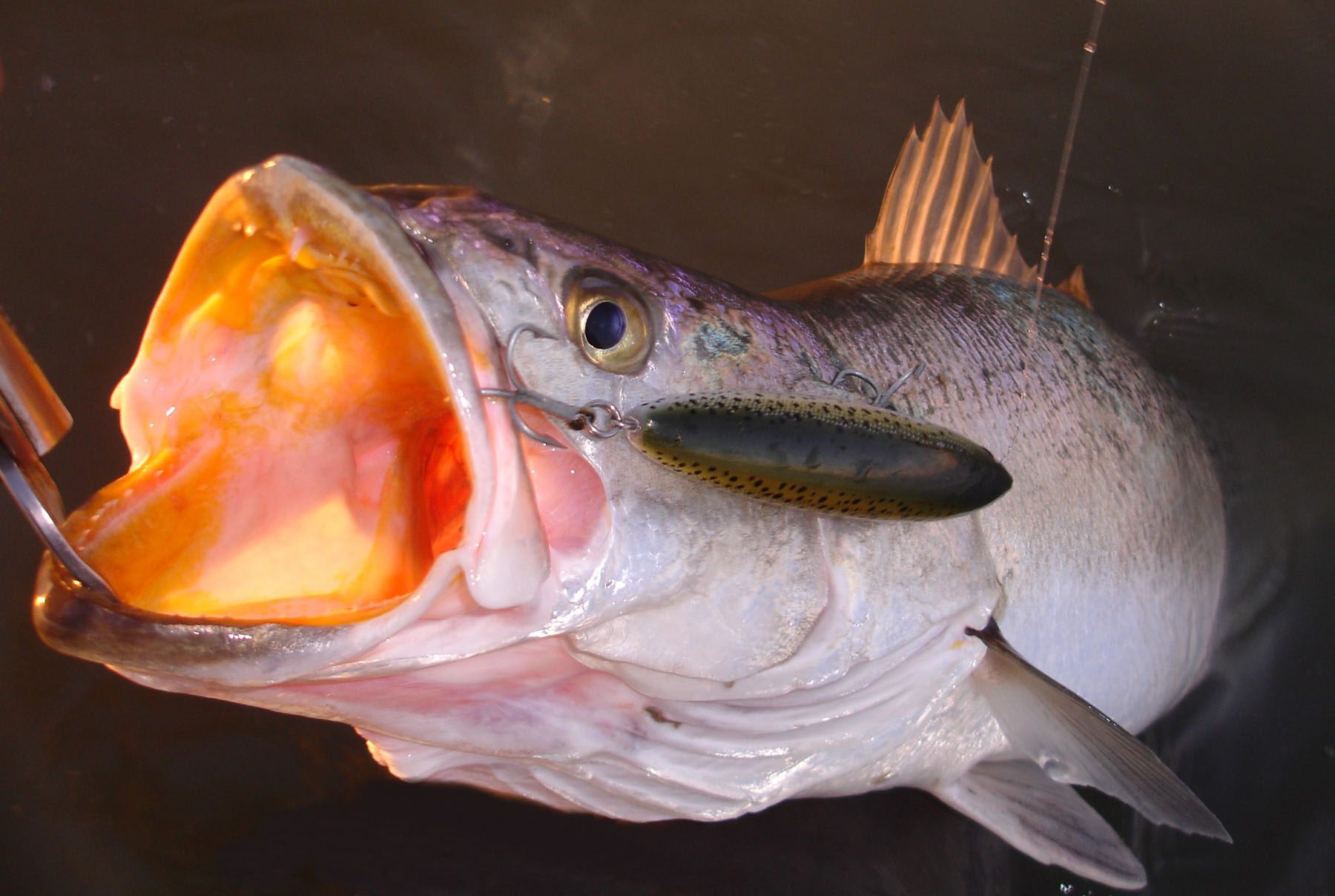 Topwaters came into play as the sun cranked up the energy levels; this one strapped right at eight pounds.
In a word, "outstanding" best described fishing in Port Mansfield during late December and early January. There seems to be a lot of fish in the system right now, and if you can wiggle around nature's timing, some of the most exciting catches of the year are upon us, not to mention some of the biggest. We haven't seen many trout bettering eight pounds yet, but action has been fairly predictable for thick-bodied specs running twenty two to twenty eight inches, and that's aside from the world-class redfishing we've had. As always, timing during winter is everything. However, being this far south, most of our northers are mild and short-lived, so it is often business as usual within just a few hours of a big blow. Last week was a prime example of typical Laguna winter fishing.

A significant norther pushed air temps down to thirty eight degrees and the water plummeted from sixty seven down to fifty one on the flats. That is an extreme thermal change, and most would think it's over for a while unless you go to the overly emphasized 'deep and low' approach. Quite the contrary here. The very next day, as soon as the winds diminished, a full sun blue bird sky made for a quick recovery.

Shallow water responds rapidly to temperature changes, so by mid-morning, sun drenched flats near deeper water with silty/grassy bottoms were quick to fill with baitfish. The predators were right behind them, hungry and aggressive. Large groups of redfish dominated shin deep or less water while trout basked in slightly deeper potholes. Typically, on the first opportunity they have to eat, they will, so be there if you can.

Brown Lure Devils, paddle tails, Corkies and topwaters all worked well on these gorging fish. They seemed to favor a faster retrieve, even in the 'warming' fifty five degree water. There again goes the deep and slow theory for all applications. At the cleaning table, the ones we kept were absolutely full of everything from sheepshead minnows to shrimp to eight inch mullet, telling us they feed very well early. Immediate norther recovery is some of the most rewarding shallow water fishing we have here, and for us, it's all about wading into them and working areas thoroughly.

Pictured is Jim Dennett with one of many knee deep reds caught that day, most all in the upper slot range. He chose a Corky rigged with single hooks and said he only missed one fish out of fifteen. [Personally, as time goes on, treble hooks seem increasingly unnecessary.] Topwaters came more into play as the sun cranked up the energy levels, including one trout strapping seven pounds and another right at eight. Welcome to the Laguna Madre.

In trying to predict February, who but the weatherman can? Speaking of which, being a full time guide you need to be right at least fifty percent of the time. We just haven't seen that high of a success ratio with winter weather forecasting. We just go anyway and so should you, barring anything dangerous of course.

What we can predict, however, is a high potential for a good trophy trout season. One indication is the impressive amount of large trout we are seeing sunning on the flats between northers. They have mostly been scattered singles mixed in with the reds, but they are in numbers we haven't seen in years, so hopefully we will have opportunity to catch them as they move to more workable areas. Many of the ones we have been seeing have been in water far too shallow to shut down, even for specialized flats boats.

February is traditional for some of our heaviest trout and we'll be concentrating on shorelines, small depressions draining flats, sunny potholes, and of course the extreme shallows as the bait concentrations suggest. This is the time of year where we have a realistic chance to catch not only one but several trout over twenty five inches on a single good day. If you are so fortunate, remember the one over twenty five rule and release the others with affection.

On a side note, I finally broke down and spooled up with braided line. Using Suffix twenty pound test with an equivalent diameter of six pound mono has been nothing short of fun, not to mention productive. A large part of lure fishing is feeling that softer bite, and even though I don't think I had a problem doing that with monofilament, I now "feel" like I have been missing something. What a difference, and I have yet to experience any of the disadvantages I have heard about, such as backlashes and the line wrapping around your rod tip. If I could offer a negative, it would be that playing large fish with no-stretch line takes some getting used to, so make sure your drags are as smooth as they can be.

Here's hoping you catch your personal best fish during this fantastic month, but you've got to get out there to make it happen. Port Mansfield is one of those special places where it can certainly happen. We are looking forward to visiting with some of you during the upcoming Houston Fishing Show March 5-9, so stop by the Fishing Tackle Unlimited booth for all of your 2OO8 gear needs and to trade a few stories. Again, it looks like a promising year!