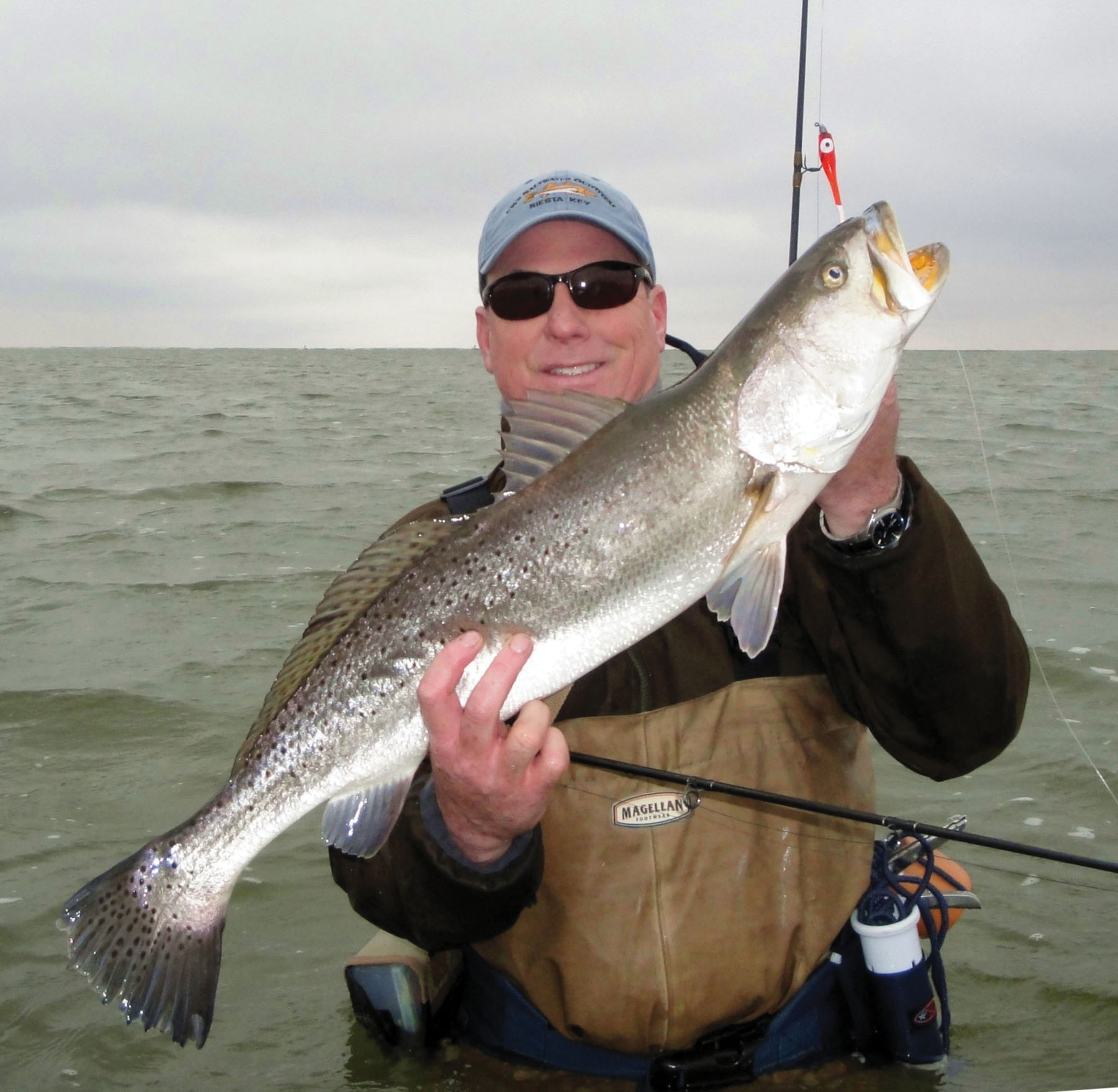 Dirk Teng’s dedicated effort anchors his membership in the exclusive “Thirty and Over” fraternity.

I think we can all agree; so much for that mild El Nino winter the weather folks had predicted. If global warming is truly in effect you wouldn't know it around here as we have been stuffing lots of extra layers into our waders. With weeks of mid-50 water temperatures plus steady bone-cutting north wind and plenty rain, little of the past month qualified as ideal for fishing much less catching. Dedicated grinders managed to eek out a few notable catches, though. With any luck February will bring more of what we all want and expect this time of year.

Even with the miserable weather excuse, fishing pretty much sucked for several weeks. Traditional patterns either didn't work or were marginal at best. Who knows why, could have been the unusually high tides or maybe the unfortunate red tide event. Fortunately for us though, most things in nature go through their normal cycles and what a relief it was to see everything suddenly be "on" again just as soon as the tides dropped and the water cleared. After weeks of dismal results large schools of redfish seemingly appeared out of nowhere and some excellent trout were right there behind them. It was just another of life's little lessons; no matter how good or bad things are they will certainly change.

Pictured here is Dirk Teng with his own brand of luck changing. He came down for nine days of fishing with one lofty goal in mind - to finally join the "Thirty & Over" trout fraternity. Dirk was realistic enough to know that the best results come from effort spent and his adventure paid off not only with this 3O-incher but a big 29 and several trout between 25 and 27 along with a good showing of thick-shouldered reds. His success was typical for the period, working concentrations of baitfish during norther recoveries with Corky Fat Boys and tails. More than anything, however, Dirk's goals were met by keeping his line in the water and being confident that good things will eventually happen for those who want it bad enough.

For whatever reason, we just haven't seen a good topwater bite in quite some time. The best areas for trout recently have been near waist deep shoreline drops and a few showing shallower along this type of structure. Scattered redfish have been in there with them, but during any extended warming period they have been schooling up both on the shallow grass flats and also in classic muddier back-water areas. Where did they come from? This past week we even found large concentrations of reds milling up high in the sand, which normally would be spring or summertime stuff. Strange indeed but, then again, nature goes through her cycles and we just have to be there when it all happens.

As usual for this time of year concentrations of baitfish show us where to start. If the bait is not visible on the surface we trust our bird friends to show us the way. Fishing-1O1 says to always rely on nature more than store bought maps.

Mullet will be big on February's menu so larger profile baits will make sense, especially in off-colored water. I like to use larger paddle tails when the bite is slow as they offer a lot of action at slower speed. Color doesn't seem to matter as much as contrast. Either brights or darks when the water is "off" and more natural offerings when the water is clear seems to work fine. The main thing is to get on them in the first place, then figure out the speed and depth. Even more important is fishing whatever you choose to throw with confidence. Ask Dirk. Hopefully topwaters will back into play soon. Fishing with plastics is always practical, but it's hard pass the experience of raw power unleashed at the surface.

We look forward to visiting with friends and clients during the Houston Fishing Show March 3-7 at the George R. Brown Convention Center. It's the show to attend, so please plan to stop by the Fishing Tackle Unlimited booth for all of your gear needs and perhaps trade a few stories. In the meantime, layer up with Simms wader wick liners, fleece pants, and windproof jackets. It's hard to be confident when you're cold, so if you are as serious as Dirk is, gear up like you mean it. There's a 3O-incher waiting for you. Never mind the reds. They're just there to pull your arms off between big trout and February is one of the best months for that to happen.