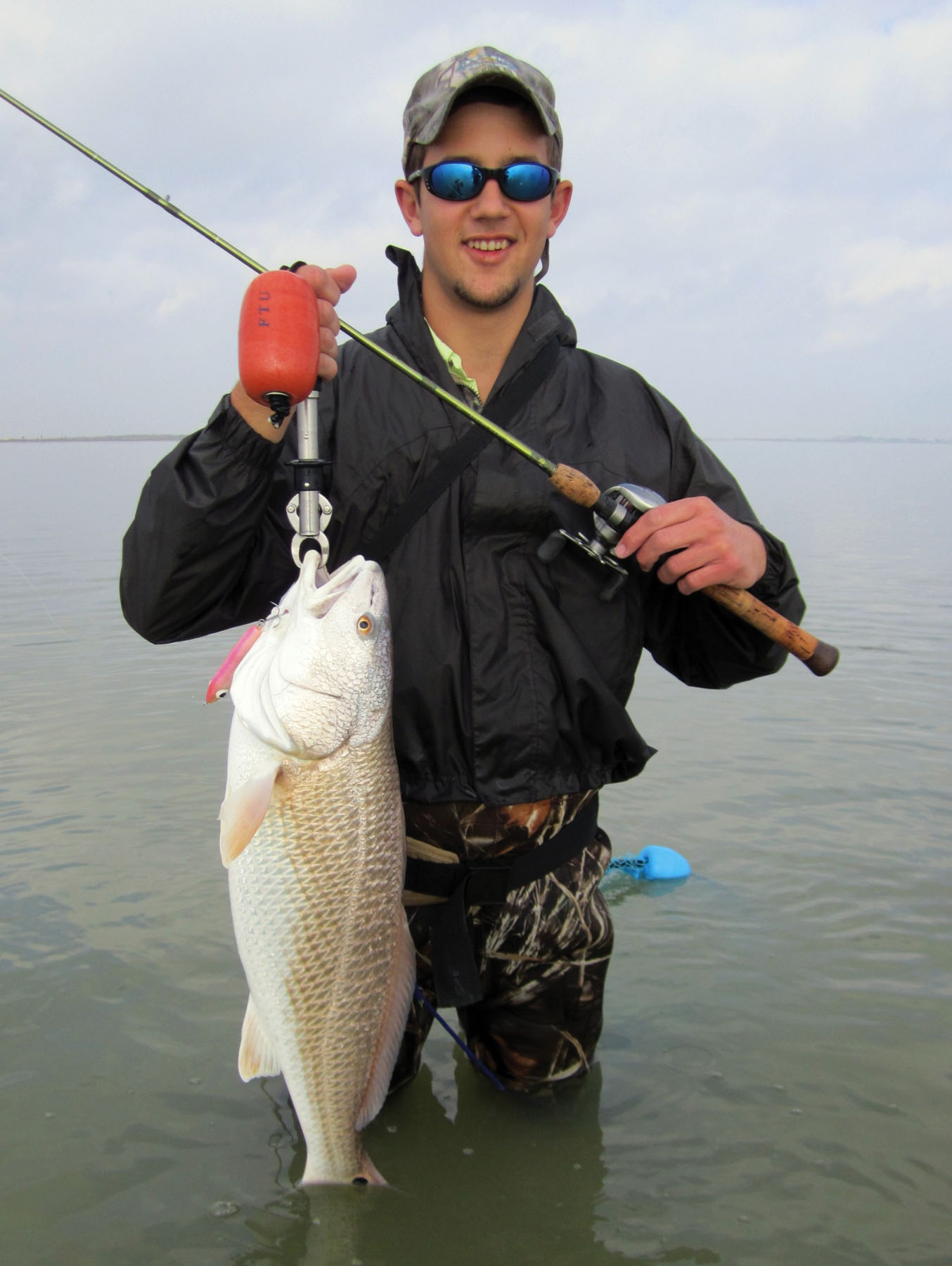 Reds are about as fat as they could ever be.
February's fishing prospects are always strongly weather dependent and of course we are hoping for the best. Winter patterns kicked in about mid-December with trout and redfish becoming predictable in winter haunts. Depressions and nearby ledges began attracting quality fish as soon as the water temps slid into the lower sixties and dipped into the fifties a time or two. It's probably a combination of many factors, but one has to consider that our five fish trout limit has helped as well. TPWD says, "Overall, it appears that larger fish are being landed and the number landed per angler is greater than seen during the ten trout limit." In my experience that would be an understatement. Of course nobody wants to see regulation changes unless warranted, but we have learned to not only live with it but also enjoy some fat results. For whatever reason, we do not have to look very hard for quality fish anymore; we are back to looking for new and fun ways to make them bite.

Fishing has been best immediately before and after strong northers and it seems the harder the blow the harder the fish tend to feed. The recovery period of two to three days following fronts have been providing some impressive action. Tails and Corkys have been dependable along with some sporadically strong topwater bites. Just last week, with water temperature at 52 and sunup air temperature at 48, the first two hours were explosive to say the least. So much for that old theory about sleeping in!

After the initial norther recovery flurry, fish start to spread across the flats until we see another round of aggressive feeding right before the next norther hits. When they scatter it's been all about the grass. Between strong winds the water clarity is usually good enough to see every little grass bed, and by wading slowly and casting to each one, some impressive fish have been picked off. Drifters are doing OK but wading offers a better shot at working areas thoroughly...plus it's more fun for me to get in there with them. When looking for best areas to try, in the absence of feeding pelicans and flipping bait, one or two seagulls resting on the water can be all you need. Current rips and color changes have been good too although these often require more confidence and patience to dial into the right presentation.

I have nothing really new to report on bait selection. Large paddle tail plastics such as the Kelly Wiggler or TTF Big Minow are still high percentage baits. Pumpkin/chartreuse in clean water and plum/chartreuse in darker water has worked as well as anything. As for Corkys, day-glow or pink-silver along with Texas Chicken or the new pink-pearl-pink have been good bets in clear water. Heddon's One Knocker continues to rule for surface work; Okie Shad or bone depending on clarity. Beware the factory hooks though as we have had more than a few straightened by redfish and trout alike. I recommend changing to stouter trebles or single hooks right out of the box. We are releasing a lot of fish down here and the single hook setup definitely ups the odds of a healthy release.

As mentioned, February is going to depend on the weather. Predictions are for a warm/dry winter, but we never know, do we? We'll just hope for the best and continue to enjoy each day on the water. I forgot to mention redfish, but when talking about fish in general I really mean all of them as they are all in there together right now. Reds are about as fat as they could ever be and it's hard to even get your hand around a mid-slot twenty-four incher much less a twenty-eight. Standard forage, such as crab and shrimp, has been tremendous after the flood and apparently these reds are enjoying every bit of the feeding opportunity they have. When you find them you find a lot, and it's been great fun getting consistently harassed by them.

On a parting note, we often begin seeing roe beginning to develop in some of our trout toward the end of February and early March. As heavy as they are now, how much more exciting will it be to see that extra-wide belly roll up on a topwater? Remember the one trout over twenty-five rule and keep only what you need so we can all continue to enjoy what we are now blessed with. Good luck in having your personal best trip soon!