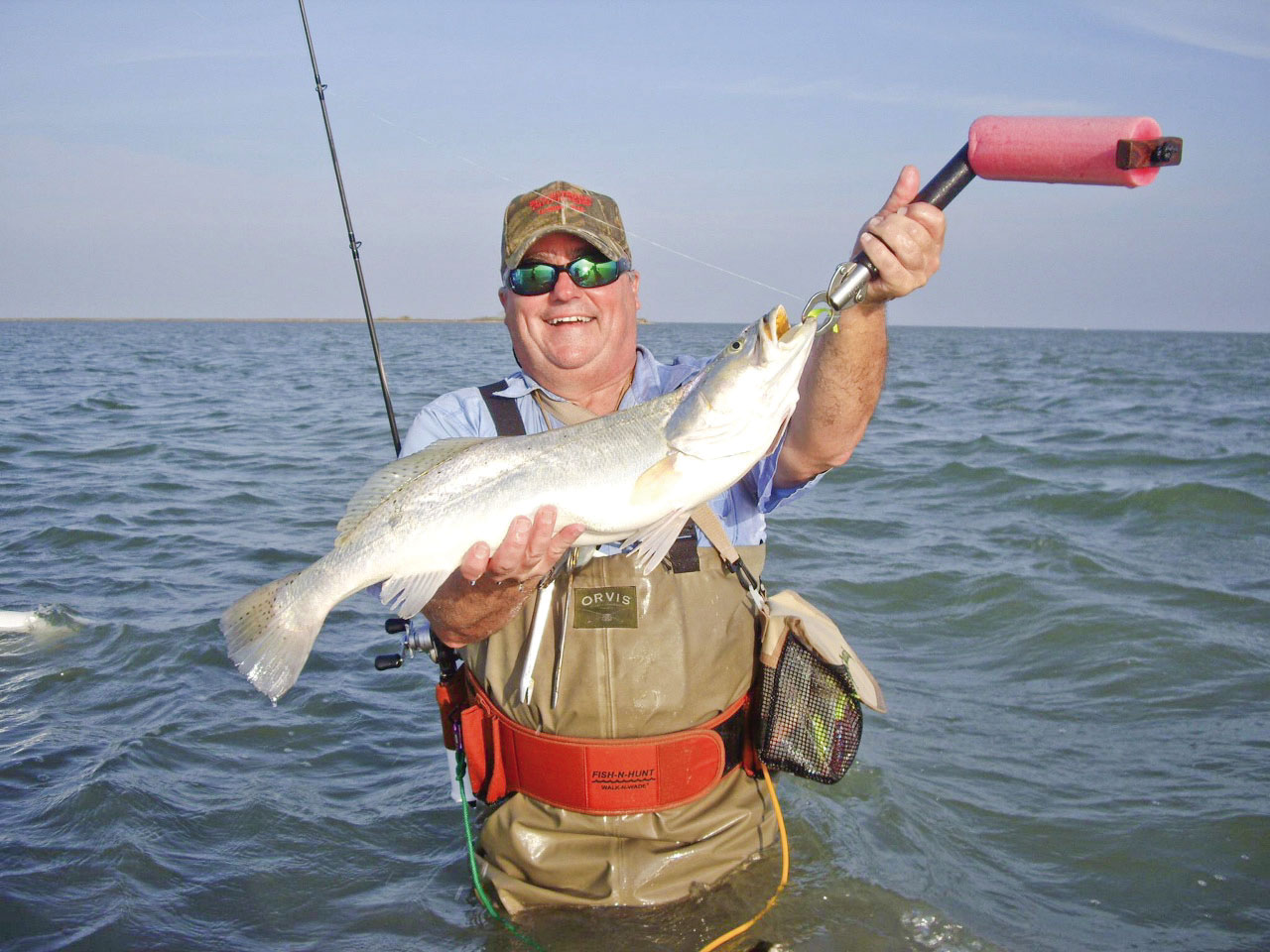 Farewell to Joe Hunt: Gentleman – Husband – Friend – Angler – Sportsman.
Well, well... Old Man Winter has finally arrived in Deep South Texas. This is what the trophy trout crowd has been waiting for; water temperatures have been running consistently in 48- 55 range for at least ten days now. It's time to layer up and pull on the Simms waders and jackets, tie on a Fat Boy and raise the "personal best" bar a notch or two.

With a couple of weeks of bone-cutting north wind and precipitation ranging from mist to downpour, we have also enjoyed a few warm and sunny days in the mix. A few dedicated anglers have had some notable catches, no double digit trout yet, but we are getting closer.

With any amount of luck at all February will bring more of what we want and expect this time of year. So far the MirrOlure Corky Fat Boys have ruled for "Boone and Crockett" class fish along shallow muddy shorelines. The best days have been during recovery right after a strong front pushes through. Quite often we found the second day, before tides fully recover, to be the very best. The colder the norther the better the recovery period fishing.

When we have been lucky enough to enjoy longer recovery periods, trout and redfish took advantage and moved to grassy potholes further onto the flats, and the high grass/sand lines on the east side. During these warmer times we enjoyed solid action on everything from surface plugs to small paddle-tail plastics.

Very interesting to me is the continued presence and numbers of huge white shrimp and blue crabs dumping near freshwater sloughs so late in the season. Several wades the other day it seemed I was kicking them from the grass covered soft bottom every step or two. Reds and trout alike have been gorging on these delicacies and I expect will continue until they either make a move toward the Gulf or all get eaten up.

Going into February and most likely on into March I will spend much of the time targeting shallow muddy-grassy guts, potholes and spoil edges. Once I locate fish we will try an assortment of small to medium topwaters, Corkys, and tails. Typically the largest trout will be more often caught on Corkys or tops, but sometimes they just want it low, and you cannot beat a paddle-tail on a 1/16 ounce jighead for this type of work. I love throwing tops, the big blowups and all, but these are usually situational lures during this month. By this I mean that large trout will often fall for them in surprising shallow water as they begin to emerge from deeper guts and troughs to feed, following a nasty cold spell.

While north wind pushes a lot of water out of the Laguna and narrows our search to deeper guts and spoil edges, I would say more of my personal winter trophy fish have been caught the second, third or fourth day following the front–when we are lucky enough to get that many in a row before the next cold blast arrives.

A common wintertime client question asks which bait they should be using. I always say trust your confidence and instincts for lure choice. I wish I could remember the number of the days the best fish came on a small plastic for the only guy in the line of four or five that stuck with it all day. Corkys and topwaters will always get way more ink but always remember that an elephant will eat a peanut!

Our heaviest trout so far this winter has been a bit less than nine, although I know some nines have been caught in the area. I'm encouraged to have seen several groups that could have included nine-pounders in the shallows this year and it is very frustrating when we cannot get them to eat a lure. It is just a matter of timing, and possibly a bit of luck, too. I sure hope one or more of my clients taps a double-digit fish in the coming month.

Redfish are abundant and it has not been uncommon to catch legal reds pulling nine and change on the Boga Grip. I guess they are really enjoying those shrimp and crab dinners.

I lost a dear friend and client in early-January. Joe Hunt never stopped living life to the fullest and dreaming big when he fished. God Bless you Joe and rest peacefully. I'm going to miss you.

February is looking great. Study the weather forecast and solunar table, layer up, and come on down!