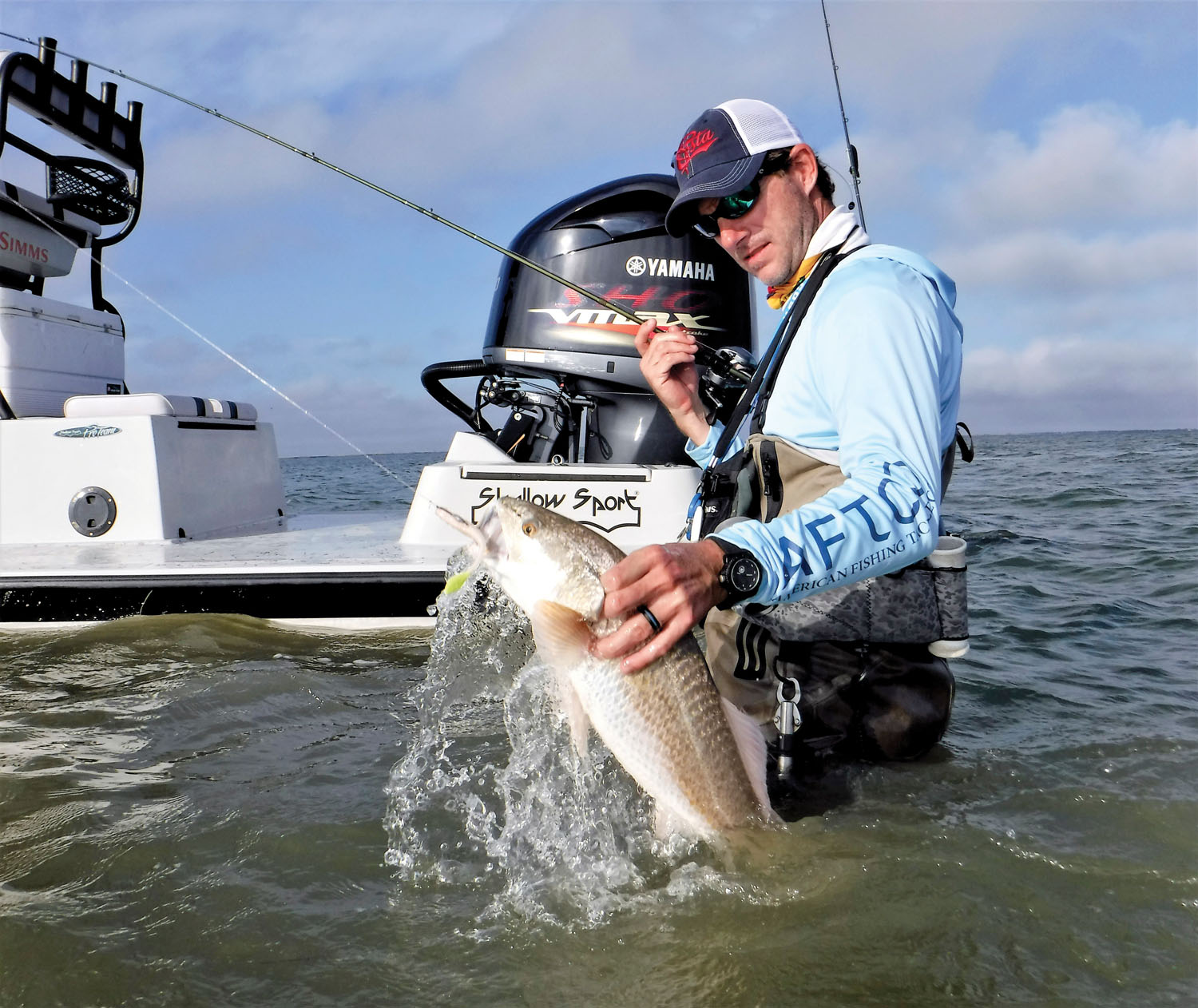 The author prepares to release a healthy red.

The first months of the year can bring the toughest weather conditions for anglers but they can also bring the greatest opportunity to target large speckled trout. How badly do you want it?

First things first creature comfort (see also; Simms). When facing adverse weather conditions, it is critical that you dress to remain dry in wet conditions and warm in cold. If you meet that goal we can move forward to lures, rods, reels, and your approach to your quarry.

We will use larger suspending baits, some topwaters, and soft plastics all of which will need to be presented slower on average than in warmer times. There may be a period when the bite will become aggressive but that is usually short-lived as the water temperatures will run between upper-40s and 50s, occasionally reaching the 60s. You can run your lures a little quicker with 60-ish water temps the general rule being the colder the water temp the slower the presentation. Accurate monitoring of water temp is critical to success and mastering slow retrieve techniques can be challenging but force yourself to slow down!

Water levels have been receding but not quite as much as we expect in winter. The areas that concentrate fish when water levels are low are obviously still fishable but the fish are not concentrated there. They are spread wider than normal, and wading anglers need to spread out accordingly.

As I continue this quest of guiding I continue to learn from anglers who expect me to teach them. I listen carefully to short conversations and suggestions from clients as to how they pick lures, lure presentation and sometimes where to fish. Recently I fished two outstanding anglers with many years of experience. We set up our boat position, Power-Poled down, and I laid out the approach. We slid overboard and after several fish each I found myself ahead of them. I wondered why I was so far ahead but didn't connect the dots until after the wade, but did I? We were all catching fish but as the distance between us grew I realized my anglers were catching more fish, a lot more. I was far ahead and pressed on, hoping for a big trout or a better pattern so I could show that I knew more and, of course, to bring them in on this find of trophy fish. When I went to pick them up I was informed they'd caught more than 25 fish each. Lesson learned. I should have slowed down. But, what if I'd found a treasure trove of big trout up on that flat?

We are seeing some very large trout while running the flats on warm days and truth be told some are being caught. With so many using and monitoring social media and seeing photos of trophy trout and big stringers, I ask that we consider more catch and release posts. Such as the Empty Stringers Catch and Release Program that Capt. Ernest Cisneros started and I have joined. You can find us on Facebook with some great release shots. It's a wonderful feeling, releasing big fish, or any fish for that matter. Some say that's "food on the table" and they are right. If that is how you look at fishing that's fine. But how about keeping a few smaller ones and releasing the mature spawners?

Empty Stringers Catch and Release Program has rewards in addition to just releasing fish. Captain Ernest and I are giving away free fishing trips for two anglers, (you guessed it C&R trips.) Our sponsors - Fishing Tackle Unlimited, Costa del Mar, Texas Saltwater Fishing Magazine, Backlash Rods, Shallow Sport Boats and others have stepped up to the plate and are all donating to the cause. More details will be forthcoming on the Facebook page so keep an eye on it.

As far as fishing, it's been good. Most fish are waist-deep or less and you need to work your baits relatively slowly, near bottom. Ball Tail Shads and slow-rolled paddletails on 1/8 and sometimes 1/4-ounce jigs seem to be the ticket. Work areas close to deep water and, on warm days, feel free to wade shallower. Although we've had a couple cold snaps, we have also had extreme warming trends immediately following that have lasted a little too long, to suit me. We need it to get cold and stay that way for longer periods. Once this occurs, and utilizing strategies mentioned here, you will likely encounter Empty Stringer opportunities of your own.

Stay safe and be courteous on the water.