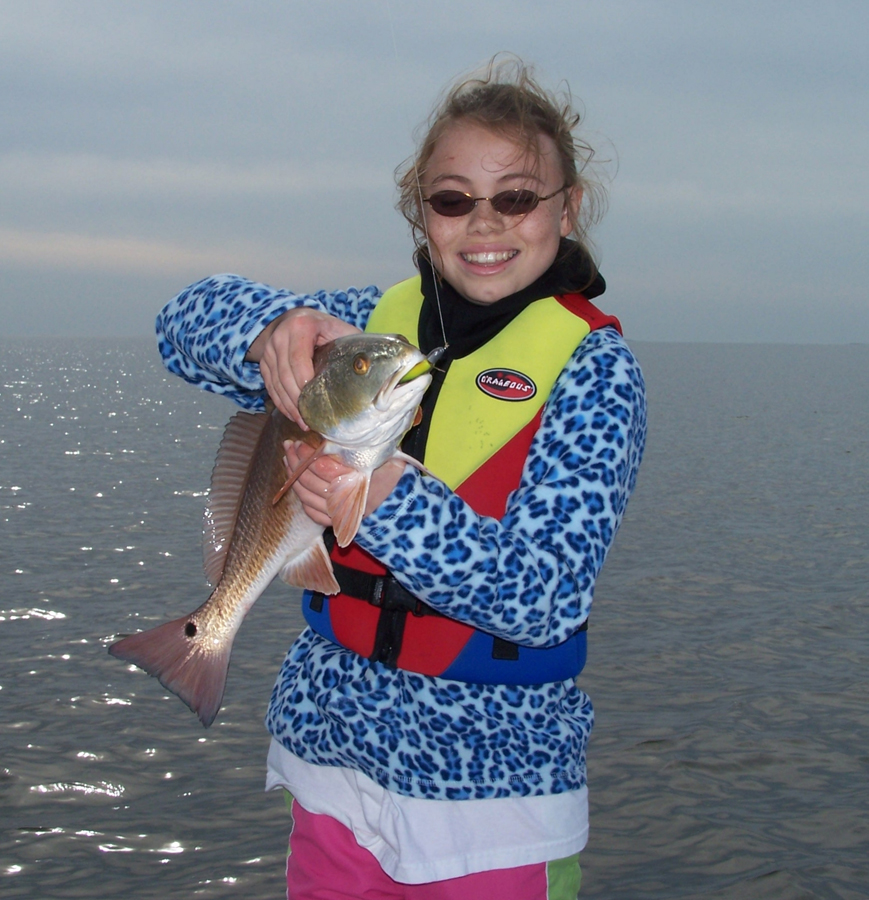 Danielle Valenta had a great day with the reds on a recent trip with Capt. Tricia.

As of this writing the Laguna Madre is being all she can be. A vivid setting of waterfowl roaring above milling baitfish reminds us of grander things. Winter patterns are set and we all look forward to enjoying the most productive season of the year for the true all around outdoorsmen. The first half of December brought us great fishing and, barring any catastrophic weather; January should prove to be one of our best ever.

December often found us high on the flats as redfish consistently pulled up to the snack bar along the first shallow grass line. Mid-to-late mornings were often best. When the sun rose to a good angle, an incredible amount of reds could be seen moving about slowly in small groups or as single cruisers. Inclement weather did not seem to bother them much, as the very day after a bitter blow they would usually pull right back where they were. It took well-placed casts to fool many of them, but there is not much more exciting than to engage in the thrilling art of sightcasting to visible fish. When visibility was poor, topwaters did well; and on several days a slow rocking paddle tail was all of the enticement they needed. Watching a bulging wake streaming toward your 'wounded' lure in ten inches of water is heart stopping to say the least.

A decent amount of trout shared those shallow flats as well, but most were the typical skinny Laguna flats fish and not the heavy weights we look for in winter. However, we found some of those larger fish too. Our bigger trout started to stage in traditional winter areas about the last week of November. Mid-thigh to waist deep grass beds near deeper water produced quite a few fish to six pounds with a few topping eight pounds. The bite was almost always delicate, and once again, a slow loping plastic tail or a suspending Corky retrieve produced consistently.

For January and continuing through February, patterns will be somewhat predictable for both trout and reds. Think shallow for warm and windy days before a norther, and concentrate on deeper cover for the first couple of cold days after a strong front passes. "Shallow" and "deep" are relative terms in South Texas and the difference can be as little as one foot. Watching for signs of small baitfish or gulls on the water will be a good clue about where to start, and the white pelicans are your best friends when it comes to finding fish-holding water.

Lures for winter fishermen will vary according to preference and skill level, but one cannot argue against proven techniques. Although topwaters can be exhilarating, they are not always the most productive lures for winter's demanding conditions. Heavier jig heads and low retrieves over grass beds will produce when nothing else will. A Corky or other suspending type bait in patient hands is always a good choice. Based on what we have seen so far, dedicated fishermen will catch their personal-best trout here this winter, and redfish stacked up in their wintry holes will thrill anyone who enjoys elbow tiring pulls.

As mentioned above, the incredible scenes of wildlife against an ever-changing winter setting can remind us of grander things. It is creation at it's fullest, but unfortunately for we busy humans and it is far too easy to take it all for granted. 2007 will be a year for me to focus more on respecting our privilege to fish in several ways. It will be helping to teach the new ones, like Danielle pictured here, to respect the resource and grow up to be not only a good fisherman but also a good steward. Her excitement for catching several reds on her first trip shows clearly on her bright face. If you could have seen her throwing away that Zebco, picking up a spinning reel, and then quickly casting with best of them, you'd know she's well on her way.

Standing on the other side of us from the newbies like Danielle are those who came before us. Many are gone but their stories remain in books, articles, and fireside chats. When we see an old salt out there, let's don't forget that their knowledge and passion helped pave the way for many of things we do today. They have seen and done things we may never be privileged to again. If anyone on the water deserves respect, it's those old-timers whose faces still show that child-like enthusiasm through the weathering of time. The fishery itself also deserves more respect from many, and for me, I will try to remember that what I take for today, people like Danielle may not see tomorrow.

Let's all enjoy the bounty and beauty that winter has to offer, and big trout and reds are at the top of this year's list. Let's take only what we need, however, and try to remember the grander things which places like the Laguna Madre can inspire.