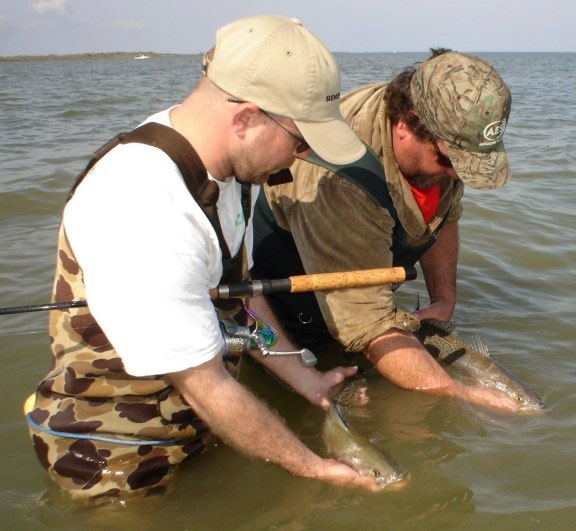 Please remove hooks and release with care; our new five trout limit will work much better if we do.
Everything has really turned on down here in the Lower Laguna. As of this writing we are already beginning to see what we had hoped for in January and February. Fish are stacking in traditional wintertime places and we're seeing some really nice ones; boat traffic has been very light. What else could you want?

During late November and early December, both the tides and water temperatures dropped as predicted. Fish that had been living secretly in deeper places during the hotter months came closer to the shorelines. We encountered several stack-up situations throughout the past month, especially during the recovery days following northers.
One recent trip was a prime example of December's potential. It came two days after a good front and the water fell from 77 to 54 in the shallows. When the sun came back out, herds of big redfish immediately moved up shallow. Early morning wind was light and hundreds of wakes and mud boils could be seen across several acres as we approached in the boat.

Although they were there in force, they were extremely spooky and well fed. It took a slow hopping retrieve with a dark tail on a 1/8th oz. jig head to fool them. You had to be meticulously alert to feel the pick-up, but once hooked, the fish went berserk and tested drags, knots, and especially heart rates. It was flats fishing at its near finest and all indications are that scenes like this will continue. The trout did what they were supposed to as well.

Moving from the skinny flat we found winter-shouldered trout in good numbers holding amid thigh-deep grass beds. For the first few hours their bite was delicate as well, but that changed as the winds picked up and the sun leaned to the west. The best retrieve went from a slow rocking motion just above the grass tips to a faster presentation in the middle of the water column. Later in the day they began feeding aggressively just below the surface. These trout ended up feeding so well that most hook-ups resulted in violent headshakes on the surface, a clear sign of a deeply imbedded lure. This is when we want to take extreme care in removing the hook and releasing them. Our new five fish limit will do us little good if we end up killing many of the ones we can't retain.

As far as fishing during January and February, the only thing that should change much will be the overall size of the trout and the frequency of the fronts. We had an excellent big trout year last winter, and it will soon be time for those 28's and above to show themselves more consistently. It is encouraging to see how healthy and fat these fish already are.

Lure selection will be secondary to finding concentrations of fish. I favor soft plastics because of their simplicity and versatility, but your favorite lure will work if presented at the right depth and speed. I will still rely heavily on the Devils from Brown Lure Co. As was featured in December's Tackle Tips, I use a split ring and swivel attached directly to the jig head. I prefer it to an in-line swivel where you have several inches of leader hanging from your rod tip, plus the vulnerability of two additional knots.

Water conditions here remain mixed. We still have areas of less than desirable clarity. It seems to move around with the winds; one day will be air clear and the next day you can't see a lure past a few inches. A general rule is darker colors for darker water.

There are two myths about winter fishing that need to be dispelled. One is that most of the bigger redfish move out to the gulf. In fact, we do battle with some of our best and heaviest reds during winter. Another assumption is that all stingrays are gone. Although not as numerous, we still see plenty and standard precautions always need to be taken; such as shuffling your feet and never stepping backwards into your mud trail.

Although our redfishing will be excellent, the main focus from now through March will be on our trophy class trout. Although they can feed very aggressively between northers, the bite is often softer than we would have it. Good equipment is extremely critical if you are serious about this, especially a highly sensitive rod.

I have been using Fishing Tackle Unlimited's (FTU) All Pro rods for well over a year now and they have performed flawlessly for me. I'm sure by now you have seen them but in case you haven't; they are a classy green color and as far as I'm concerned, the nicest stick out there. Although they offer a "no questions" lifetime guarantee, I have personally fished these rods hard enough and loaned them to enough customers to feel safe in saying that if you break one of these you probably did something wrong. A lot of people don't know that all of the components are of the absolute highest quality available, and the best part is that they are offered for about one-hundred dollars less than any comparable high-end rod.

Winter is where it's at for high potential adventures and this year looks like it's going to be a good one here in the Lower Laguna. Looking forward to seeing you, and may your personal best trophy fish come in 2008.