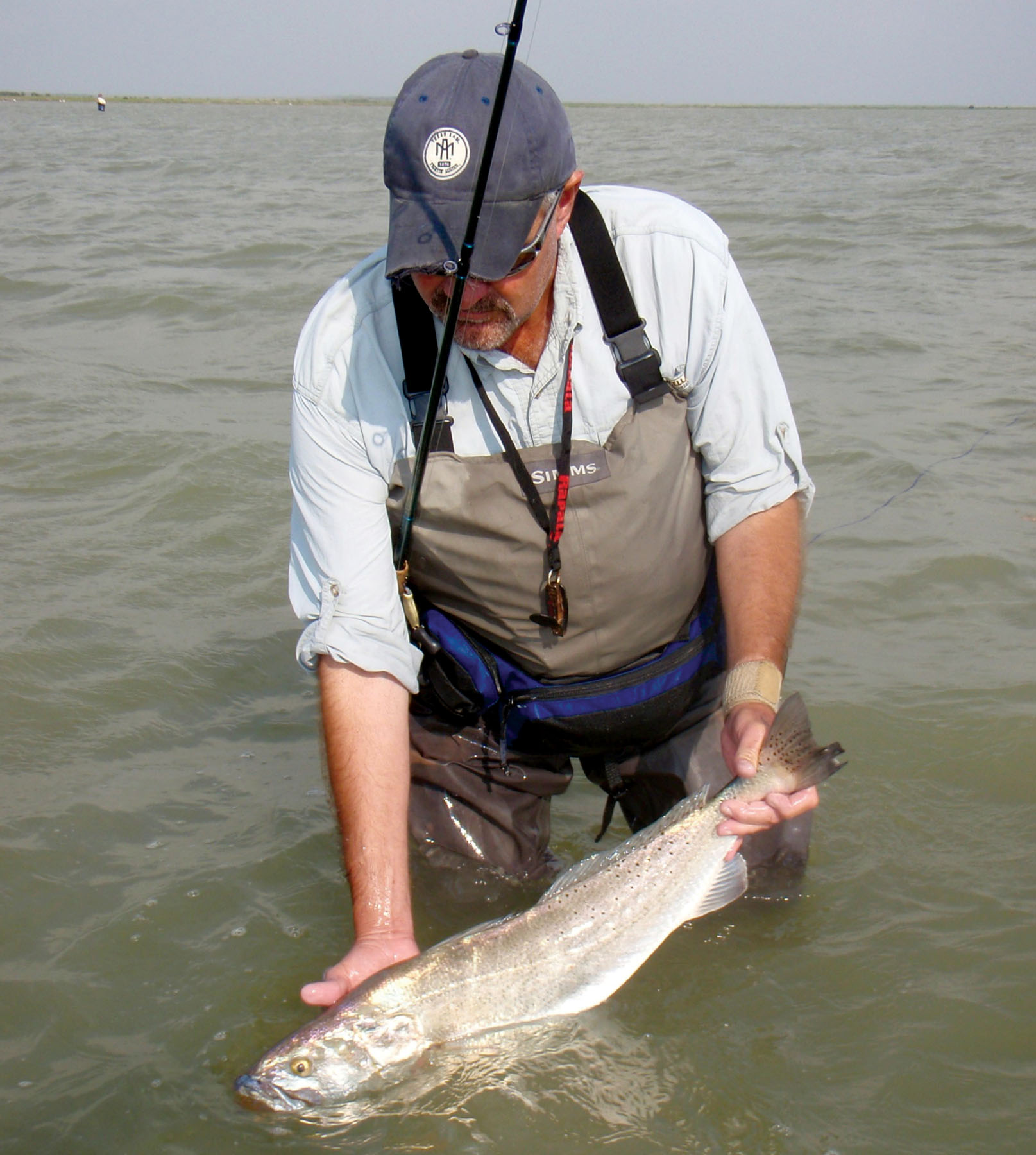 There is little question that wading the shallows is usually more productive than drifting.
It's early December and winter has finally arrived in deep South Texas. It's raining; the temperature is dropping and not expected to get above the 5Os for several days. A gloomy short term report but exactly what serious fishermen have been waiting for. If everything goes according to plan, we should see some of our best and most predictable fishing of the year between mid-December and the arrival of the equinox tides in March and I am excited.

As far as recent activity, while we have indeed had some great days, everything seems a little late this year. By this time a year ago we had already experienced several exceptional days of multiple trophy-class trout and schools of bruiser redfish testing even the best of tackle. While still classifiable as good, we haven't seen much of the exceptional yet. Persistent higher tides and a touch of red tide may explain some of it and conditions are changing for the better as we speak.

The most consistent trout bite remains over deeper grass beds. While topwaters have been exciting on specific occasions, the little plastic tail has ruled. Whether we like it or not, it usually does, and most of your best anglers are adept at making the "worm" work it's magic when all else fails. There have been fewer but bigger fish using the heavily grassed shallows, but if you wanted to catch them, it has taken a dedicated effort of fighting through floating grass and often across softer bottoms. While everybody wants a trophy, that badge has definitely been coming at a premium.

Redfish during late fall were mostly scattered and not schooled as I predicted but, as always, persistence on the flats paid off. Again, the tail was the most consistent tool in your box. It was all about the potholes and working a tail slowly through each one, sometimes repeatedly, to finally feel the distinctive thump that signaled another set of broad shoulders. Braided line helped to not only to feel those subtle pick-ups, but also to control the lure precisely. With reduced boat traffic we should expect more fish to use the shallows longer during the day.

January is an exciting month as whenever the weather allows us to launch safely the potential for an outstanding day is always there. Even if we find only half of what we did last year things should still border upon epic. Of course, January fishing always revolves around the northers. Being this far south we recover in as few as 12 or perhaps 18 hours and post-front fishing is usually pretty good. Once the fish acclimate to colder water it will be business as usual, and the better ones will be extremely shallow both before and after each passage.

Wintertime fish are often more concentrated which means that when it's time to feed they will feed voraciously. It's still all about finding them and figuring out the bite, though. Unfortunately, many anglers believe too much in the "deep and slow" and cheat themselves. Some of our best wintertime action comes in waist-deep and less. Watch what the bait is doing and follow their lead. When the bait is active in the shallows, let the masses dredge the depths.

There is little question that wading the shallows can be more productive than drifting for the simple reason that when you get on them you can stay on them without having to fire the big motor to go back around. I can't tell you how many situations have been ruined by boaters who just don't "get it." I see them with their long-shaft "walleye water" motors sputtering and digging trenches in sensitive areas, especially where other fishermen are hard at work. You know who you are, and you need to know some of the damage an unaware skipper can cause. We are all in this game together. Considerate behavior makes the world a better place and certainly improves the fishing.

As far as what to use during these colder months; bigger baits will become more reliable as mullet become the main forage. For plastics, I'll rely on the 4" Kelly Wiggler paddle tail and the Brown Lure Devil Eye. Plug choices will be Rapala's new sizes of X-Rap topwaters, namely the X-Rap 11. It's a little bigger than a Skitter Walk, extremely well made, and has called up some exceptional fish this past month. Whatever lures you prefer, it's time to tie them on if you are serious about catching your lifetime trophy. Did I mention that I am excited?