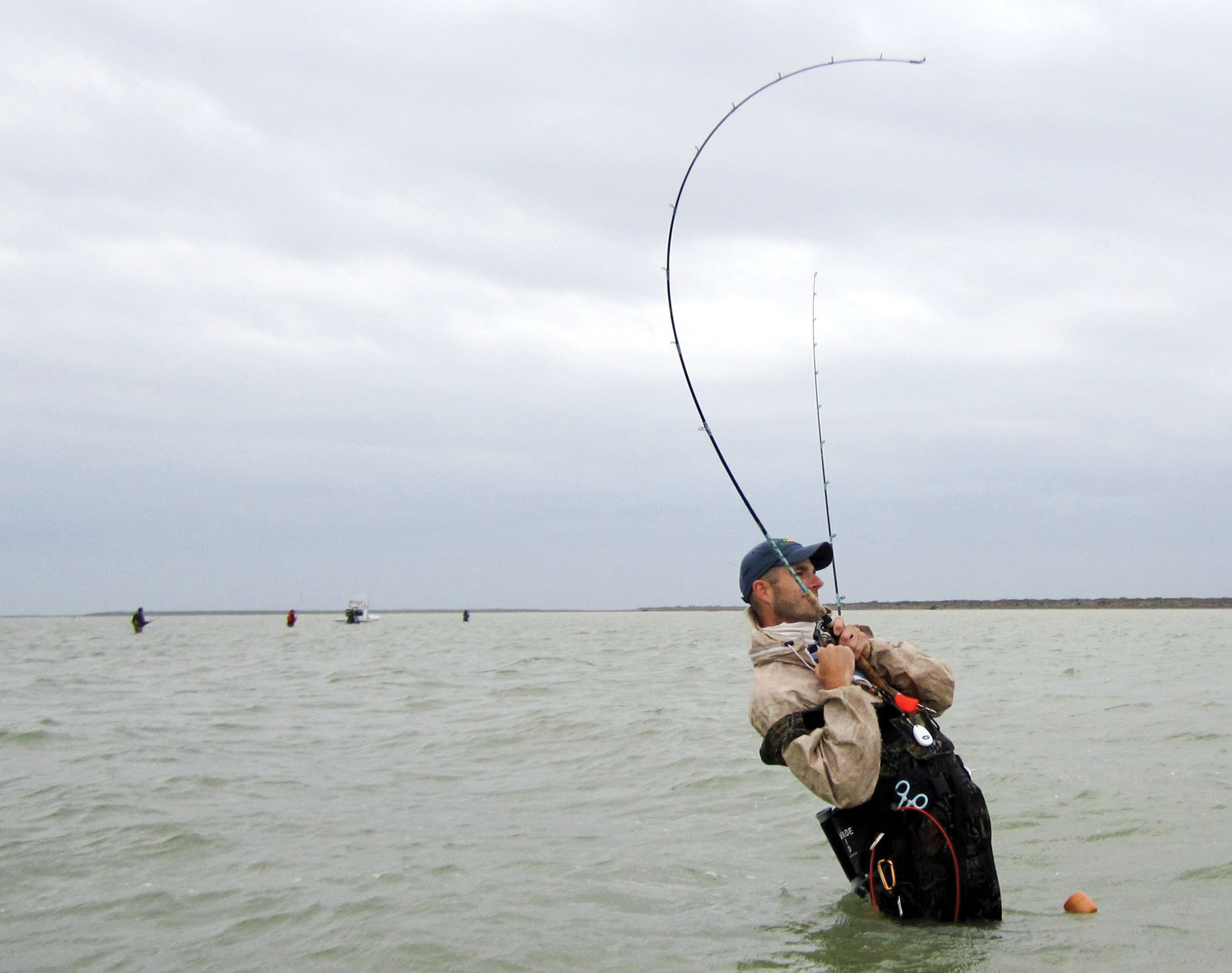 Capt. Wayne Davis sets back on another good one.

What a great year we had in 2011! We can only hope to be so blessed again in 2012. We fully expect continued great trout fishing, so we can either make excuses for not catching our personal best or fish enough that we don't need an alibi. No matter the outcome - we are primed and ready for the excitement of another round of winter trophy season so get on down here.

Water conditions of late have swung from way too clear to unexpectedly murky beyond hope. Our seagrass meadows still aren't what they should be following the floods of 2010. Some areas have rebounded quite well, others not so much. The waters north and east of Port have stood the test of wind the best, but the clearer the water becomes the fewer fish we find. Down south it has not been the wind stirring things up as much as it has been wings. The duck numbers are just incredible this year and they are just flat destroying the fishing in some areas with their rooting and feeding activity. When the muddy water clarity doesn't get you the floating grass they've uprooted will! Quality fishing is about dealing with adversity though, so we learn to adapt.

The trout action has been consistent in areas making sense for the conditions, yet no two days lately were created equal. One day we are overrun with dinks and the next they are all four to six pounds. Still early in the winter season, like the size, they are not yet consistently thick around the middle. Some of the longer fish have been lean while some of the 22 and 23 inchers are already pushing five pounds. Good friend and owner of Kelly Wiggler lure company, Capt. Wayne Davis, got on a school of excellent trout several trips in a row, and in addition to numerous 28s and 29s, he landed an impressive 32 incher. A rare fish lengthwise but the Boga said barely eight pounds. Meanwhile - just a short distance away we picked up several 26s that weighed near 7 pounds - go figure! This brings up the ages-old question whether we should rate a trophy by length or weight.

By the time this issue hits the newsstand the winter pattern should be in full swing. January will require good planning and good gear to make the most of the opportunity. I will be layering head-to-toe in Simms under-wader and outer garments to ward off the chill that always seems to accompany those epic fishing days this time of year.

Hitting pay dirt often in January will require finding and reading the mood of the bait. Basically, I'll be looking for three things to go with that bait - color changes, temperature changes, and water movement. Down here in our part of the Lower Laguna, water movement is wind generated for the most part. Color changes too are products of wind. Temperature changes are often found near backwater drains and sloughs. Putting the whole equation together should land you smack in the middle of excellent wintertime action.

You hear a lot about "warming mud" this time of year. Now I'm not going to pretend to know which bottom can absorb and hold the most heat because my feet get just as cold wading that "warming mud" as when I cover expanses of hard sand on a cold day. But let me tell you this, we have caught many a great fish over hard bottoms during winter. Bird and bait activity, whether over hard-packed sand or soul-sucking mud, should never be left unexplored.

Now, just because there might be fish in the area does not always mean we can catch them. We just have to get in there, go for it, work and wait. Also remember that fish tend to be more concentrated this time of year, so another major the key is to stop(!) when you start getting hit and work the area thoroughly.

As obsessed as we can become with wintertime trophy fishing, nothing has really changed from the last two hundred articles we've all read about it. It's still a time to be patient, enjoy the day, be confident and just keep casting. I love those mega-trout as much as anybody, but I also just love to catch fish. All the big reds leave the bays in winter, right? I'm going fishing, for trophies or just catching, and I'll expect the best. Wanna go?