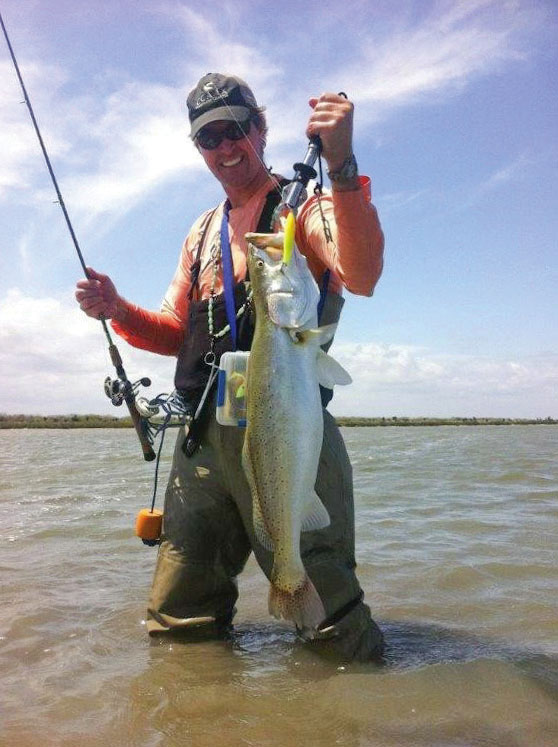 Everything has turned on down here in the Lower Laguna. As of this writing we are beginning to see everything we had hoped would develop for January. It has been cold enough for fish to stack in traditional wintertime areas and we are seeing some really nice ones. Boat traffic has been relatively light. What else could you want?

In late November and early December, both the tides and water temperatures dropped as predicted. Fish that had been secretly staying in deeper zones during the hotter months started to come closer to the shorelines, and we encountered a few gang-up trips the past month, before and after frontal passages. Prime examples of winter's potential in Port Mansfield can be seen in every archive of my article for the last ten years. I can still say I am as excited now as I was then, possibly even more so.

The past few cold fronts have changed much for the positive. The water temp has already dipped into the upper-40s a couple of times, believe it or not, and this is what sets the stage for excellent winter angling. The early staging we've seen thus far has provided predictable patterns, something we'd have traded a birthright for a couple of months ago. Some days more trout, and some more reds, and others a nice mix of both.

January should bring us some of the coldest days and possibly water temps also. Standard pre- and post-front approaches will be in play. When pre-front conditions prevail you can expect southerly wind to 20-plus, a great time to fish the East Flats. Shallow grassy shelves dotted with sandy potholes that rim deeper water can hold some impressive trout and redfish. Larger baits can come into play in pre-norther conditions and one has to assume it is gorging before the front. Fat Boys and large surface baits can often times work better than tails, and much of the time few surface signs other than a stray gull or mullet flip will alert you of gamefish presence.

Looking at the post-norther side of things; I generally say the colder the better, but this is predicated on how long it has been cold. Many times fishing is best when the water is warmer than the air. Let's also not forget fish in less than calf-deep water being very likely during norther recovery as shallow waters will usually warm quicker in afternoon sun.

So far we have not had a trout in the double digits, but I am thinking we may crack it soon. Redfish have also been thick and so have the black drum. I have a new appreciation for the latter species and have had some challenging sight-casting sessions recently.

Another topic I would like to bring up is a shout to all my loyal business friends over the years. I am very grateful to have such reliable partners in the saltwater fishing field. Thank you, Everett and Pam Johnson, for allowing me the privilege to write in this magazine since 2004. Wayne Davis, for keeping me stocked at all times with K-Wigglers soft plastics and jig heads. Simms Fishing Gear and my liaison Eric Kraimer. MirrOlure, Hogie's Lures, Salt Life, and so many more I cannot list due to space requirements. My sincerest thanks to each and every one of you! With that I am very excited to announce my old and new friend Jimmy Burns and Waterloo Rods. I can't tell you how excited I am to be back with the best Texas rod-builder in the business. It is great to be dancing again with the one that brung me!

Another old friend has some very exciting new lures and jig heads that I am also thankful to have in my arsenal. Norton Lures has a brand new Sand Shad Jr., made in America by the way. These little babies with the patented Norton paddle-tail have so much action in a tiny package that makes them fit into just about any fishing situation. Norton is introducing an exciting new color they're calling VooDoo and also a new model jighead based on the Gamakatsu 3/0 EL Flat-Eye Hook. This jig will sport 3D Eyes and Double Flared Gills and should on dealer's shelves by early-2015.

The New Year is looking great on the Laguna. Happy New Year my friends!