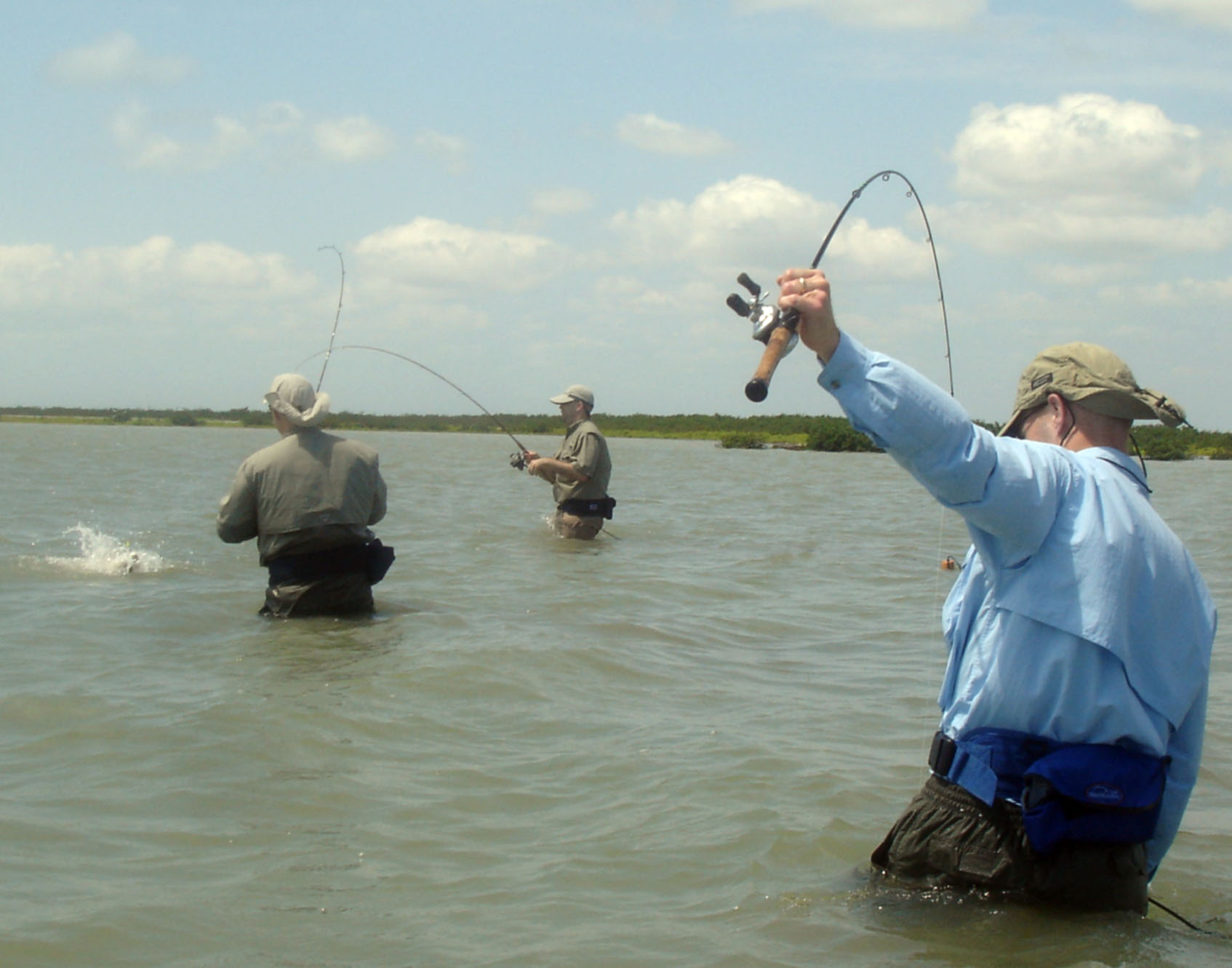 Wading can be essential to staying on “localized” fish when they are found.

The Lower Laguna Madre remains as awe inspiring as ever but fishing with lures is becoming somewhat of a dedicated grind as of this writing. Water levels rose more than a foot during late May, plus we had a considerable amount of rainwater to deal with. That is quite a change for an area with an average depth of two and one half feet. Mother Nature required us to work harder most days to earn the title of angler. Seismographic activity down south took away a lot of otherwise productive water, and persistent high winds also encouraged us to be more creative. However, despite the challenges, we've been catching our fish and are having a great time as always down here in paradise.

As far as higher water levels go, we might think the fish would immediately take advantage of it and move far into the back lakes and high onto the sand and grassy shorelines. Although some of that occurred, most of our success was consistently found out deeper. We suspect that unusually strong easterly winds and little sun had an effect. It kept the shallows cooler than normal, which makes sense to us why fish may have been deeper. The fish that were holding deep were often tricky to locate. And once located, wading was the best method of staying on them. We termed them "localized fish" since they were holding in very small areas and moving very little.

We have been catching most of our larger trout early in the day along spoil banks, near cuts with good current flow, or along deeper drops adjacent to shorelines. (Deep - meaning waist or more.) Working in these depths has changed some things for us, we are using 1/8 and sometimes 1/4 oz jigs with our soft plastics more often than our normal 1/16 ounce size. Topwater action has been spotty; smaller plugs like the Spook Jr. have been producing better than larger and louder baits. This may be due to the plentiful amount of shrimp in the Laguna Madre at present. We are still using Skitterwalks and She Dogs when things get choppy; however the plastics are the best bet by far over the past several week period.

Our redfish are starting to pod up, but again, when you find a group of them, don't leave until you feel you have exhausted every effort. We have many small redfish prowling the flats as singles, but groups of the better ones are more elusive. It pays to launch early before boat traffic drives them off of the shallow flats, and then to follow them as they move towards deeper, mid-day sanctuaries. As hot as it has been, and with the pesky winds, most of it is over by 2:00pm or so and won't pick back up until near dark.

The month of July will offer more of the same, but things should get considerably better with the tide dropping out making fish become more concentrated. An exciting opportunity we are looking forward to will be sight-casting to tailing redfish early, and then throwing at wakes as they terrorize the deeper mid-day flats. Trout will still be high on the list, but you trophy hunters know that summer is not the prime time for heavy weights. Most fish will be thinner, and except for the most dedicated efforts, harder to come by on lures. "STAR" quality fish will certainly still be here, just expect to manage you expectations accordingly.

Back to sight-casting. Of all the fishing opportunities available here, sight-casting is by far my first passion. It is also one of the things which make the clear waters of the Laguna a world class destination. It requires a trained eye, very precise casting skills, patience, and above all, the love of the hunt. In my opinion it is the most challenging (and rewarding) fishing we can do. Sight-casting is usually defined as throwing to fish we can clearly see, but to me, identifying other signs caused by shallow feeding fish count as well. Those signs can be many, and many are very subtle.

Low-light, glare, and off-colored water can make it difficult to actually see individual fish, but their positions can be betrayed by watching for any unusual movements. Those movements can be small dancing shrimp, flat-hopping mullet, or a nearly imperceptible difference in surface chop. This is the first skill to learn in sight-casting and often the hardest.

"Captain, I just don't see what you see," is a common lament. However, once you learn what to look for it becomes easier. Determining direction and lead time is an art, and so is figuring the wind to ensure accurate presentations. There are many times where you only get one shot, and it needs to be made within seconds. This is one of the elements that make sight-fishing exciting.

As a matter of fact, we should never toss a lure without aiming at something. Making this a rule will make us better casters and better fishermen. Pick something, anything, and do not take your eyes off it as you cast, much like never taking your eye off of the ball during a golf swing.

There are a lot of ways we can catch a fish, but catching them the way I want to catch them makes my heart pound. Finesse and accuracy, coupled with discipline and tenacity is a fine combination in any sport. When fishing gets tough, as it often can, put your head into it and make something happen. Good luck, and keep your eye on the ball.