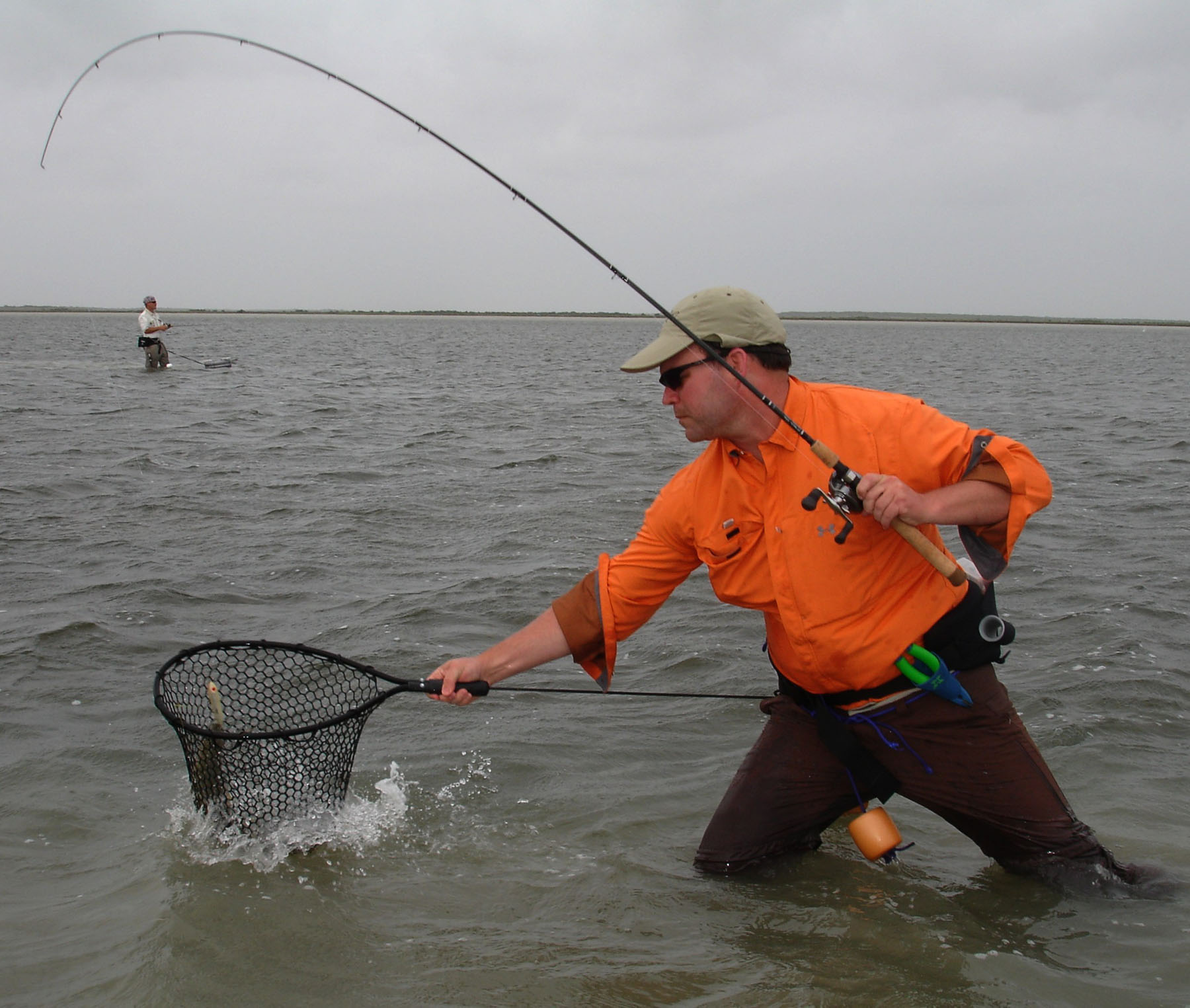 A go-for-it attitude, a good eye, plus a wet lure are what put fish on your line.
Late May and early June were pretty much on track here in Port Mansfield. As predicted last issue, it was a good "get bit" period despite several of those grinder days we all experience. Winds were often more than wished for but overall catching rated high as the fish usually don't mind getting tossed around near as much as fishermen. At this writing, the wind is sustained over thirty and gusting over forty, but we still managed to have a good trip. Pictured is Baron Unbehagen with a thirty-three inch red caught today on a Super Spook Jr. in less than knee deep water in a semi-protected area just as the wind started to honk. No matter what the conditions, a go-for-it attitude, a good eye, plus a wet lure is what puts fish on your line.

One aspect about the Laguna Madre is that even in extreme blows, much of the flats can still hold good water and some great fish. A consistent pattern during small craft advisory days such as this is simply to find flipping baitfish along color changes and get in there with them with a dark plastic tail on a 1/8 ounce jighead. When you decide to go fishing and the weather doesn't cooperate, it is what it is, so just do it.

No new news as far as lure selections go, but as we go into deep summer we will see the timeless 1/4 ounce weedless spoon come into play more often. Long wades on the flats with a spoon will usually get you your reds. We will often start early in the sand or right along the first grass line, then fall off with the fish towards deeper water as the sun pushes them down to shadier depths. A variety of lures can work from topwaters to tails, but usually a subtle presentation is best in calm, clear water.

There will also be opportunity for some great trout on summer's shallow sand, such as this chunky twenty-six incher shown being released by Charles Sandford. Our skinny water cools rapidly overnight in this desert-like environment, and stepping out of the boat at first light can feel cool even during July and August. The fish like it too, so find bait in the sand early and you've also most likely found fish.

We have grown sick of the wind lately, but we will soon beg for even the slightest breeze as the summer doldrums set in. Calm water is great for seeing big herds of reds pushing wakes, and we are excited about that, but that same slick surface can also make fishing quite difficult. A stealthy approach is critical. When you run across a big school of redfish it is far better to keep going and circle wide behind them rather than to simply crash them as is so commonly done. That's called "torpedoing" and it messes it all up for everybody. Overly excited summer boaters can keep these fish nervous and moving which can make them almost uncatchable. Please consider others and either drift, troll, or wade into these schools.

Please give waders a wide berth on the flats. No matter how high fuel gets, burning a little more to go wide around them is worth giving others the best shot at that special experience they came for. Often traffic doesn't hurt fishing as much as we'd think, but in clear shallow water, even a nearby passing boat can put already skittish fish down or move then in a hurry.

In July, while many of our reds will be found shallow, except for early mornings, most of our better trout will be on deeper structure. Submerged points on the west shoreline and deeper breaks, bars, and spoil banks throughout the system will usually hold fish. If the bait is up and active try topwaters. If not, drop down with a 1/4 ounce tail and probe until you find the right depth and speed. Never believe heavy trout cannot be caught during summer.

Boat traffic down here has been lighter than normal. Fuel costs and the new five trout limit probably play major roles. We are already seeing more mid-range trout between eighteen and twenty-four inches. If you are after a quality experience rather than one of quantity, this is good news. Another interesting positive is that despite dismal Texas Parks & Wildlife gill net results, we are all strangely catching more flounder than in recent years.

The bay is healthy, clean and clear. We will soon see large schools of cruising and tailing reds using the flats early and murky depressions later in the day. Trout will be mostly smaller than we saw in winter and spring. Still, those big ones we all covet are here too. Despite the heat, summer fishing can be hot as ever. We are excited about the summer of 2008.