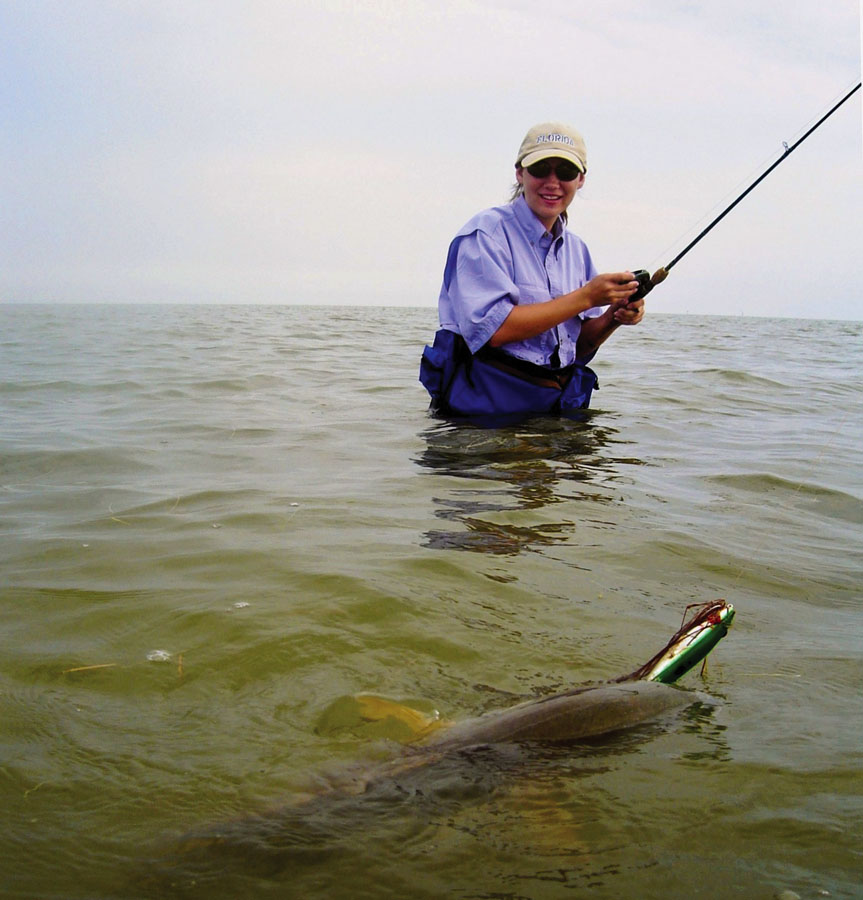 Loud topwaters have been “banging up” solid mid-day reds.
The Lower Laguna has been rewarding anglers generously but not all days are handed on a platter. It seems you either find the mother lode or reel through myriad smaller fish looking for better sizes; but that's fishing good catches are quite often the product of investing solid effort for a full day. Deep summer patterns hit rather early this year and we've had to adjust our tactics. Wonderfully cool morning sessions in the shallows have been followed by waist and even chest deep wades over grass beds after lunch. July should bring much of the same and I believe everything looks promising.

Trout have been thick in many areas but the throwback ratio can be rather high in some. Let's all be careful unhooking and releasing these smaller fish as they are our future. It looks like recruitment has been very good and great things lay in the store barring any natural catastrophe. Big trout are still available as well, just not as heavy as they were in the cooler months.

There has been a good early morning topwater bite for larger trout in the shallows, unfortunately though, the summertime armada of boats burning shallow water can push them down in a hurry or make them difficult to catch. There have also been many long-shafted outboards running the shallows lately getting stuck and leaving horrible prop scars. Please try to operate within your boat's limitations and give others a wide berth.

Floating grass is becoming more of a nuisance. The mornings have been relatively grass free but as the day heats up dead grass and algae "gas off" and float to the surface making many areas virtually unfishable. (Yet another reason to get an early start.) We have also started to see a few big sharks. Last week we had a large bull shark take an oversized red in one gulp, topwater and all, leaving only a giant mud boil as an aftermath. Although by local knowledge this is about the worst that has happened down here we still need to respect that they are there and keep our fish on quick release stringers. I'm not sure that some of the newer stringers with steel cables in them are what we really want in summer when the big sharks visit the bays.

Although trout fishing has been consistent and should remain so, mysteriously, those expected large groups of redfish have not been using the flats much of late. The larger ones have mostly been staying in deeper/dirtier areas, but that should change in July.

July is "get bit" time. The whole Laguna is full of fish and they can be caught just about anyway you'd like. However, never assume that large trout are out of play on lures. Last July I caught a 31 sightcasting for reds in gin-clear calf-deep water. (Gotta get that early start.) Standard game plans are to start shallow where you see wakes, baitfish or birds, then walk them down as they move towards deeper water with the sun. Sightcasting in the shallows, my absolute passion, will become much more productive as the wind lays in mid-summer.

Sights of tailing and waking reds will be more common. An attentive angler will spot every slight movement and shadow and know where that next cast should go. Stealth is extremely important, if you can hear yourself walking you are moving way too fast. Weedless spoons can catch them when nothing else will, and in spooky situations, the little 1/8 ounce gold is the way to go. Just wobble it near the bottom and expect it to get hit. A small split ring and swivel on the lure helps eliminate line twist and a teaser tail can entice trout to hit it with equal vengeance. Don't forget the paddletails. Some think they are only for kids or novices, but in the right hands, they are an extremely productive tool. I'd stay with the natural colors in clear water.

It is wise to minimize your gear for deeper wading. A couple of lures, pliers and a stringer are all that are really needed. Loud topwaters can pull some mid-day bruiser reds out of deeper water as they leave the shallows and stack up in depressions. What a blast!

Its going to be nuts down here until Labor Day. Retaliation is never the correct response when other boats come too near. Keep your cool. There's plenty of water and fish for everybody.