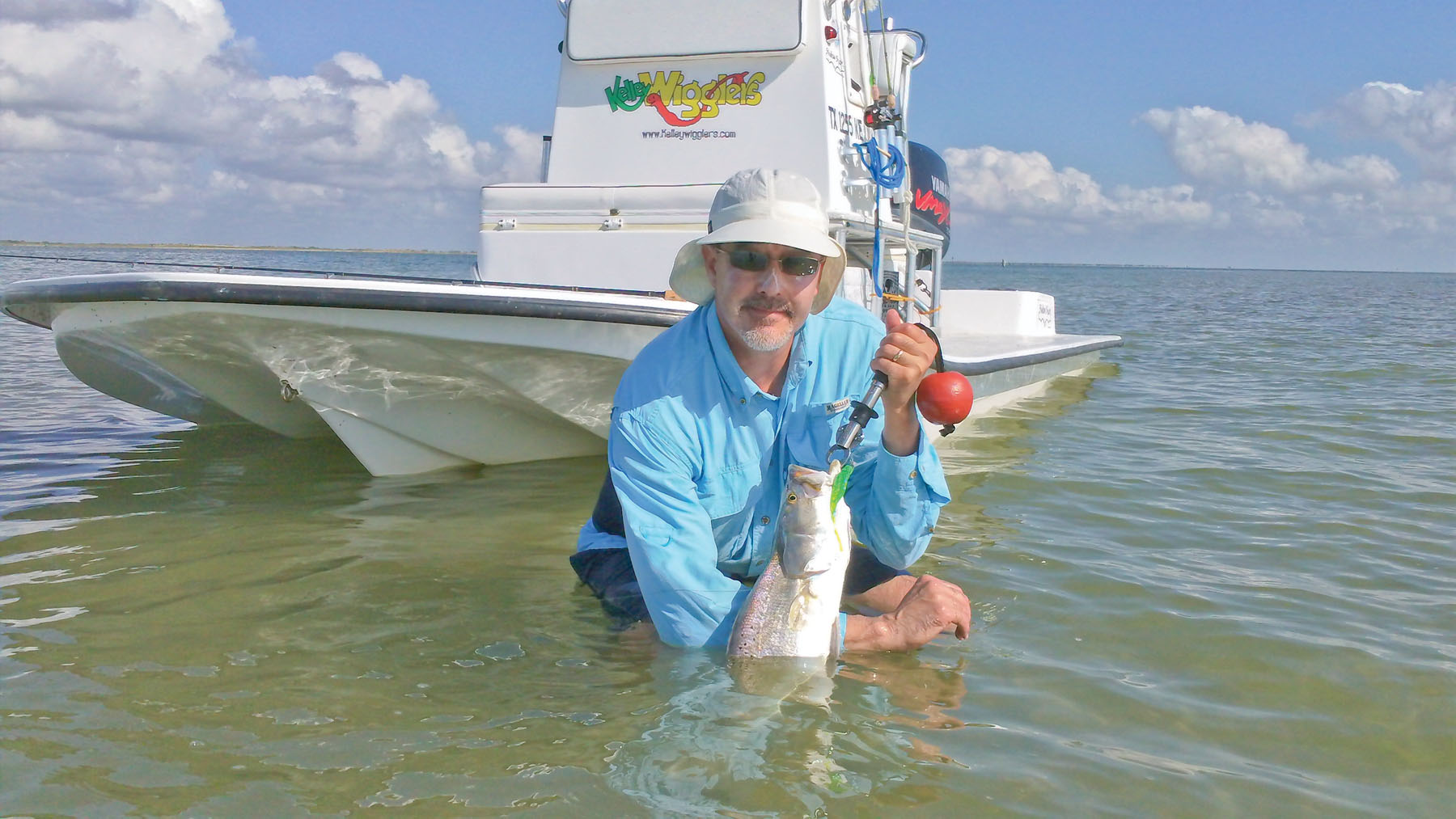 Hitting the shallows early is a good plan for mid-summer trout.

Hallelujah – I think the wind is finally gone! The Laguna has been very kind, but even with the friendlier winds of early June, not all days have been gimmies. Being in the right place at the right time is still what fishing is all about and, success will always come easier with a Go For It attitude, a good eye for what's going on around you, and keeping your lure wet.

Let me bring you up-to-date since my last article. We battled wind for most of the past month. Sustained 20-25 mph was very common and several days gave us steady blows of 30-35, gusting into the 40s. This would mean a total blowout in most Texas bays but the Lower Laguna Madre is a tough old gal. We couldn't always fish where we wanted but small pockets held decent clarity, even through the worst of it. Most of our fish (trout) were caught shallow over sandy bottom, near and around grassbeds. Early mornings usually offered good windows, with clear streaks of water holding for a few hours depending on wind direction. Small topwaters did well when baitfish were active but plastics were most consistent as usual. Redfish action has slowed as the schools we had been seeing are now gone from the flats probably to deeper environs than we have been targeting. We are catching more flounder than in recent years and we are glad to see them thriving.

On to July. It will be hot with many near-windless days when it will be tough to find a steady bite. This happens every year and no matter how good a fisherman you are or how good the fishery is, we just have to deal with it. Early morning will bring the best surface action so don't be late. In this desert-like environment, skinny water cools rapidly overnight through a process called radiant cooling. You will notice it the second you step out of the boat. The fish like it too, so find bait in the shallows early and, you've also more than likely found fish. Calm and shallow water will require smaller, more subtle surface lures; Top Dog Jr, Super Spook Jr., smaller Skitter Walks, Spit'n Image, etc.

Fish will hold shallow for longer periods on cloudy days, especially redfish. Throwing at wakes or exposed tails and fins in shin-deep water can make the rest of the world go away. Look closely as not all of those wakes are redfish. A square, black tailfin (trout), is the ultimate sight-casting target but they are usually pretty spooky. Pinpoint accuracy in lure placement and ultimate stealth required!

Some of the best sight-casting opportunities for spot tails will occur a bit later in the morning after the sun is high enough to allow anglers to better see the fish. Well-placed shots with light jigs and spoons should get hit, especially when fish are in small groups as they will feed competitively. Now some may raise their eyebrows in disbelief but we really do have opportunity for sight-casting for trout down here, even in the middle of the day. The East Cut area spoils and clear shorelines with deep drops nearby come to mind. Incoming tides of cooler Gulf water do amazing things.

As the day wears on, the majority of the trout will begin backing off into deeper water. The opposite of radiant cooling is superheated water from the sun. In the extreme shallows far from deeper water, we can easily see temperatures of ninety degrees and higher late in the day. Keep this in mind when you see water draining late in the day from very shallow areas. It may be cooking the area its draining into.

As usual in hotter months, the standard routine is to start early, start shallow, and simply move down towards deeper structure as the day wears on. It should be a great season here, and if the Memorial Day crowds were any indication, a lot of folks are counting on it. It's going to be crowded, so let's just plan on it and act responsibly.

Speaking of acting responsibly; we had a case here recently involving shockingly irresponsible behavior. A family had overturned their little flats boat in deep water, kids floating in life jackets and the mother lying on the overturned hull needing CPR. Three boats went right past them in full view and never batted an eye. Thankfully a humane boater stopped to render aid and no lives were lost. Sure hope we can do better than that if it ever happens again. Practice good manners and good boating safety. Catch a big one!