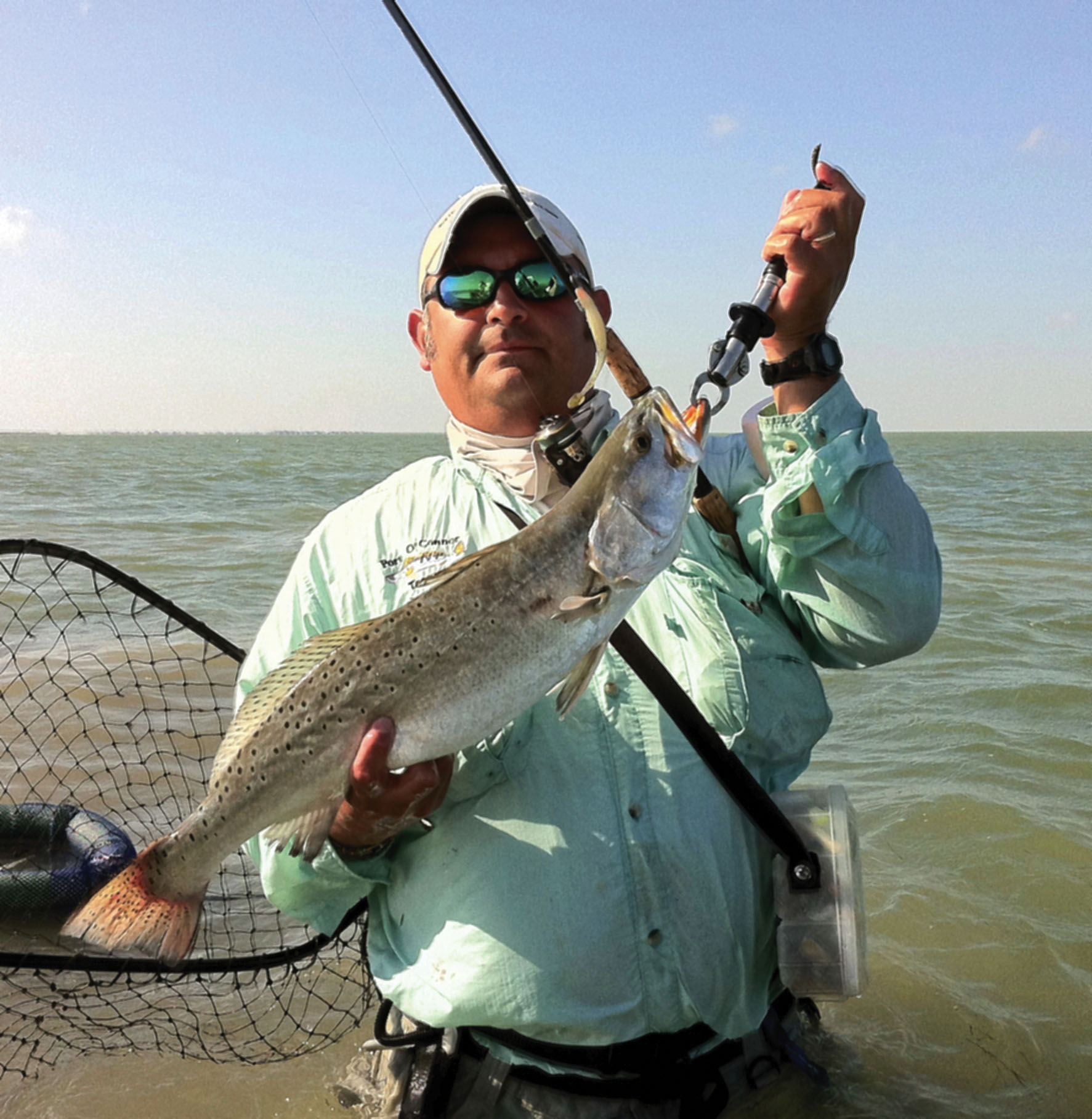 Fishing remains "fishy" in Port Mansfield; still scratchy at times but, overall, catches have improved of late. July should turn things hot in more ways than one, and we certainly look forward to wading into some new opportunities.

We have grown sick of wind but it won't be long before we will beg for a breeze when the summer doldrums set in. It will be a time to get out earlier than most other seasons, so being prepared before first light might be a "catchy" idea. Often, our best catches will be shallow early and perhaps short lived. We have already seen goodly amounts of floating grass, and as the days heat up the dead stuff will increasingly float to the top turning otherwise prime water into an impossible mess. Your topwaters can still work with accurate casting between windrows and swapping treble hooks for singles can help quite a bit. When they want a topwater the hookup ratio seems plenty fine whether with two barbs or six.

Besides continuing SSE winds, hot little jellyfish (sea nettles) have made wade fishing with bare legs interesting, especially in areas near the East Cut. Bull shark sightings have been interesting as well. We haven't seen all that many, but the ones we have seen have been quite impressive. Just the other day I rolled one in my new Haynie Cat as I exited the old Bennie's Shack cut to the ICW; thumping it with a sponson. TPW biologists report snagging several recently in their survey nets. They have never bothered anyone I know of, but still set the stage for an interactive adventure while wade fishing. We are also seeing lots of cow nose rays - comical to watch some clients "walk on water" when they see wingtips shredding the surface.

Consistent trout catches have predictably come from the deeper grass beds. That pattern will continue, but we should also begin seeing them using the extreme shallows early in the day. Shallow water can almost feel chilly at first light and both fish and humans enjoy the break. Sight-casting, if anything last year, can be about more than redfish with realistic chances to catch a trophy trout - opportunity that most "production oriented" anglers overlook. Kelley Wiggler ball tail shads in Moon Beam and Sand colors on 1/16 ounce jigs are reliable offerings.

Redfish? For the most part, we have been catching scattered fish out deeper rather than getting on those normally expected groups of fish milling up in the shallows. Makes one wonder if increasing shallow water boat traffic might be altering time-honored patterns. I can safely say that I have seen fewer tailing redfish in the past few years than what we would normally expect…far fewer. Most of our bigger brutes have come from nasty, grassy, waist deep potholes. Hopefully, for sight-fishing enthusiasts, we will see that change soon.

As mentioned, it is wise to be prepared early during the upcoming dog days of summer. Besides a classic early fish bite, where all tackle and gear needs to be rigged and ready before leaving the dock, there are other gremlins that can pop up and cause us to miss the day's best action. As of now we have no waterside fuel in the Port. The gas lines at our Exxon Bait Shop out on TX 186 can be irritating, and it doesn't take but a few thirsty offshore boats to drain the tanks dry for the better part of a day. Now that school is out and yellow live bait flags are flying, waiting in line to buy ice at the bait house can be frustrating as well. Curiously, I guess there will always be a certain amount of folks who still wait to buy their fishing license until the morning they go…sometimes dominating the store counters to where your Gator Aid gets hot while waiting on them. There should be a fishing procrastination law for the good of the group.

In closing, we mourn the loss of our world-class water-side eatery, El Jefe's Marina and Cantina. Nothing lasts forever though; we just hope the rumors that a bulldozer will soon turn such a fun place into another row of condos are not true as we had only one such restaurant and already plenty condos. For now - be forewarned that the place is closed and we have no gasoline or diesel available except at the Exxon convenience store.

Please be courteous on the water. And if a tasty fish dinner helps make your day on the water more complete, remember that a black drum is always better on the plate than a trophy trout!