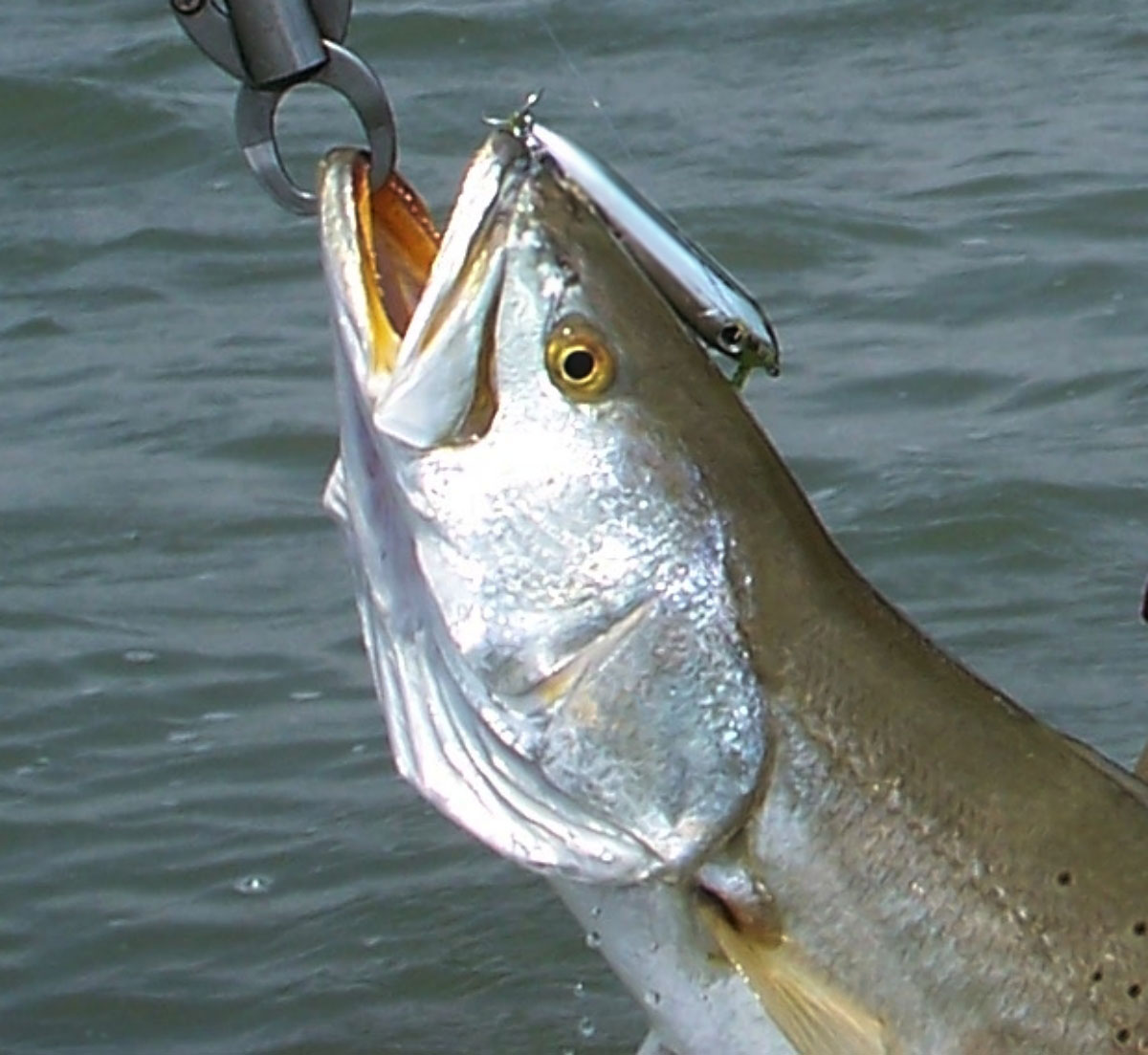 Late spring was a fairly typical one this year along the lower reaches of the Laguna Madre. Overall, fishing rated good and sometimes even bordered upon excellent. Of course, along with those exceptional catches came a few days where results were marginal at best. There is always the good and the bad. That's just fishing though; one great thing about the Laguna Madre, even when fishing is bad it's never going to be ugly.

As far as the good days went, when our fish fed they did so aggressively and virtually anybody could catch them. The shallow flats worked alive with baitfish, the pelicans and seagulls stayed busy, and life on both sides of the bank was out and active. Redfish podded up in small wolf packs and a trained eye could easily see them wake as they swirled to compete for food. Redfish are awesome in that respect. When they group together it can be a serious display of brute competition and no lure in the water is safe.

Topwaters worked well during these aggressive periods and the strikes were often as ambitious as the fishermen. Lower morning winds usually called for smaller, junior-sized plugs. The louder, She Dog types were mostly reserved for whitecap conditions, but there was other times when they were also hit with a vengeance even during calm conditions. There's not much more exciting than to see one of these "bottom grubbers" crash a topwater in shin deep water. As a rule though, soft plastics were still the most consistent. Again, being observant and casting to disturbed water gave the highest rewards. While blind casting works, the most successful angler always tries to find something interesting to cast to.

We mostly found our best redfish feeding in off-colored water about shin to knee-deep. The presence of active baitfish was important, but not the most important factor as we have often been taught to think. We can't see the little pinfish, crabs and small shrimp they are eating from the surface. Productive areas can be wind-blown shorelines, slightly deeper troughs over color changes and along current rips caused by the wind whether we see much bait or not. Finding areas not molested by boat traffic will become even more important during the next few months. Unfortunately, those areas are becoming smaller, so it often pays to work small, out of the way places.

In addition to some great redfish action, we often found some very good trout feeding alongside them. In support of the TP&W data, many of the trout were small, few were in the mid-range, but we did enjoy several trophy catches of twenty-eight and over specimens. The same baits applied and we even had one seven-pounder caught on a gold spoon. The easy days are always what they are and are always appreciated, but the real fisherman in us has to come out during those periods of lesser activity. When conditions get tough, as they often do during spring, it can take some creativity to pull things off.

Full summer patterns are soon to be upon us. Each season offers its own set of challenges, and here in South Texas we basically have three: cold, windy, and hot. Summertime fishing can be as hot as the weather, especially early and shallow, and then again late and deep. As far as early goes, some of the most exciting fishing the Laguna has to offer is sightcasting to redfish in clear shallow water for the first few hours of the day. Indeed, that is what has traditionally made the lower Texas grass flats a world-class destination. The grass line next to the sand traditionally will hold fish willing to hit good presentations early in the mornings, and we can often follow the fish off the flats as the day wears on. Deeper breaks and drops will hold quality trout for those wiling to get their shirt pockets wet. Drifting can apply, but in my opinion, there is little as exciting as getting in there with them. Quarter ounce tails worked near the bottom will catch good trout throughout the day, especially if we have the right equipment and the tenacity to fish hard for whatever the day has to offer.

Another bait which has given us an advantage is Bass Assassin's new Slurp. During down times, its scent can and will make a difference. While paddle tails will always have a high place in our tackle box, the straight-tailed offerings will cast farther. There are a lot of opinions out there about how to get a fish to eat; angle of presentation, types of lures, etc. However, just casting well beyond a fish you can see, and then reeling it up slowly to its path, will usually get it done.

Go when you can, and dance with the fish like nobody is looking. I know I will.