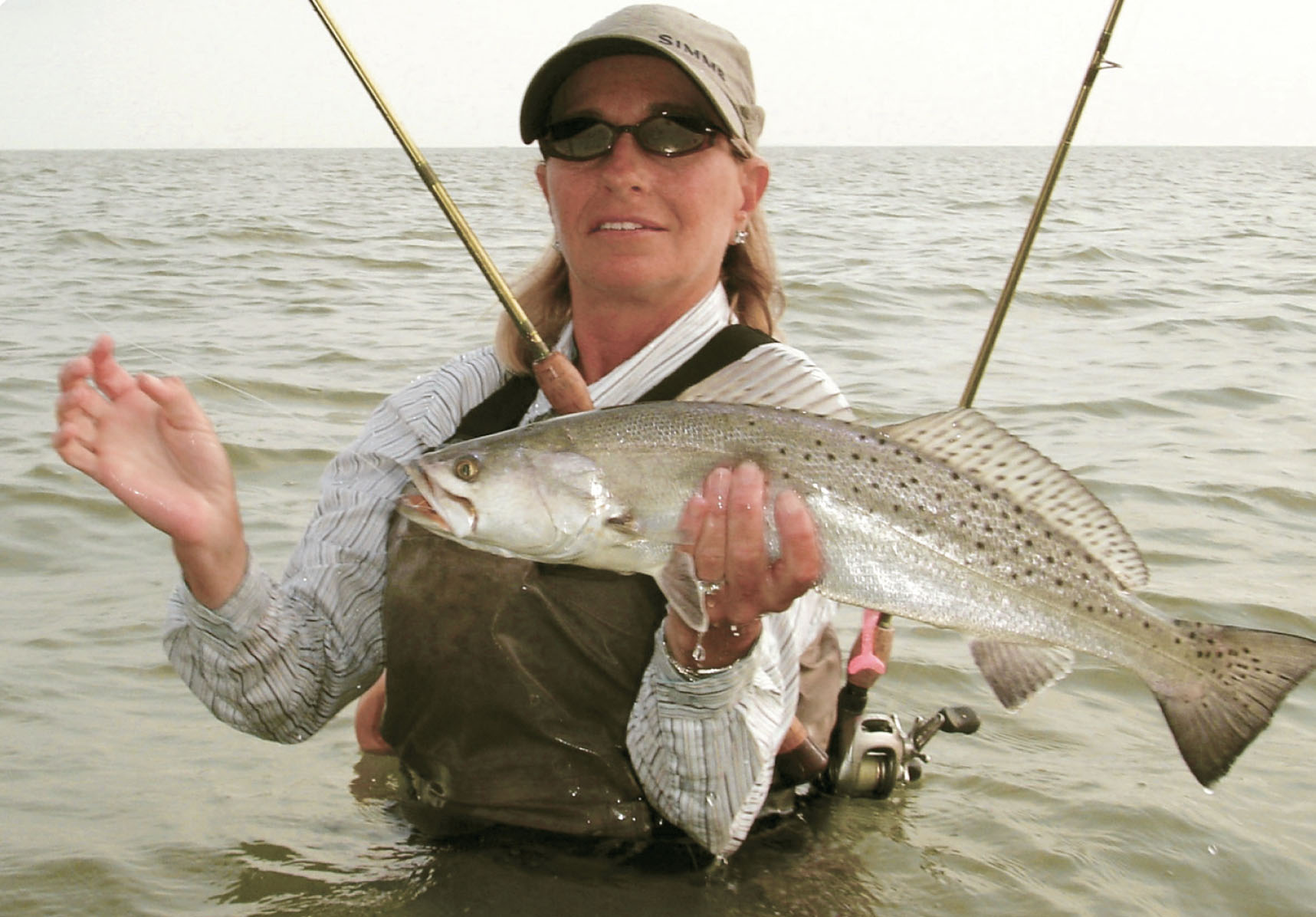 We have been very encouraged by the number of 18 to 24-inch trout we’ve been seeing.
Fishing in Port Mansfield during spring was awesome and even the catching part was great!

Surging tides from the Gulf of Mexico pushed blue/green water into the farthest reaches of this shallow Lagoon. Seemingly overnight we saw overall levels rise more than a foot; significant for an area where the average depth is only two and a half feet. Massive rafts of nervous mullet appeared and were hammered by voracious gamefish and pelicans. From the eastern flats to the newly flooded backwater shorelines, the Laguna came alive with incredible displays of feeding activity. Although there were several days of “impressive” spring winds, we were fortunate enough to have mostly good weather and good fishermen to go with it. If what we have been experiencing lately is any indication this may be one of those great fishing years we all hope for.

Water conditions are presently excellent with no hint of nuisance algal blooms. With the flats rinsed crystal clean, the seagrasses are growing tall and lush. One can only imagine what it would be like here every spring if our East Cut was fully open. Yes, we have fl ow from the gulf, but I cannot help but think even greater volume would be better; unfortunately the channel continues to silt in and we fear it could close one day. Please keep the state of the Laguna Madre in mind and help us pray for the continued quality environment this area is famous for.

Spring trout patterns were consistent and fairly predictable once you figured them out. For whatever reason, many of the better fish went “deep” sooner than expected. “Deep” here means waist deep instead of shin. Topwaters worked well when baitfish were active near the surface, especially during early morning along dropoffs near the ICW. Noisy She Dogs pulled several trout of seven-plus pounds near rafts of mullet; expecting one over eight pounds to crash your topwater was realistic. Soft plastics on 1/4 ounce jigs produced consistently any time the bait was staged lower in the water column. We relied mostly on Brown Lures. One in particular is the translucent Devil Eye in chartreuse/gold/white, which seems to fool even the finickiest fish in this clear water. For all-around use the plumtreuse on an 1/8 ounce head remains our go-to bait.

There are a lot of shrimp in the system and nearly every deep grassbed seems to be holding fish. While we are still finding many juvenile trout far below legal size, [a great sign] we are also encouraged as the number of mid-range fish between eighteen and twenty four inches seems to be increasing. Could the new five fish limit already be causing this improvement? Whatever the reason, our trout fishery seems to be on an impressive upswing at this time. Our redfish have also been providing lots of action and expect this to continue through the month of June.

Les McDonald, famed outdoor artist, was here with his annual Quail Unlimited outing. The first day was to be a late afternoon run and the target was trout. True to standard afternoon pattern in eighty-degree water, darker plastics worked along waist deep color changes and grassbeds proved productive. Although the bite was low and soft, everybody caught trout of impressive size, including one stubby twenty-six inch anomaly that weighed an incredible eight pounds. While those proportions are certainly uncommon, we can still expect some of these trout to remain heavy going through June. We can also expect those low and slow retrieves in windy afternoon color changes to be good starting points. Although the bite may not be aggressive, it is a classic stack up situation where good presentations can reap great rewards.

The next morning brought classic late spring redfishing. It’s nice when redfish do what they are supposed to, and as if on cue, they were grouped thickly on the skinny flats. As the sun pushed higher they drifted to the first series of potholes just past the sand line and became easier to catch hitting everything we threw. Tails, topwaters, spoons, Gulp baits; it just didn’t seem to matter. For about two hours we stayed hooked up with some of the best fishing fun you can have with dry knees.

The next day we enjoyed another fun outing with the David Sambrooks group working dark plastics into wind-stirred color changes late in the day. Baitfish were flickering and a few curious gulls hovered along the color lines. Even though most of the bites were soft, we enjoyed excellent redfish action by slow-loping the baits near bottom. Most of these late afternoon fish ran just under the maximum size of twenty eight inches and several pushed well over the line. One thing that helped all of us feel the subtle bite was Sufix braided line, I doubt we’d have felt many of those delicate taps with monofilament. One of the guys, though standing in the middle of several continuously screaming reels, managed no hook-ups until we switched him to braid. It really does make a huge difference.

Ask Kevin Brock what he thinks of the U.S. Reels 230SX spinning reel spooled with 2O/6 Sufix braid mated with a seven-foot FTU Pro Series rod. The rig seems perfectly balanced for flats fishing, the reel is actually designed for braided line and its drag system is more than a match for anything oversized Lower Laguna reds can dish out. Fishing is always better with good gear, and the catching certainly is.