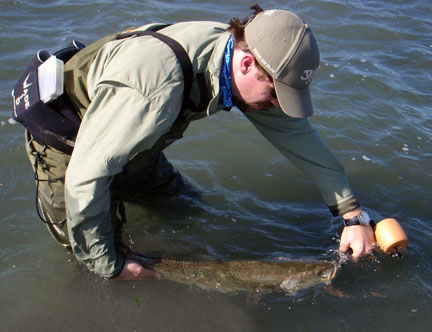 Bigger trout have remained shallow; Casey Rollins releasing a great trout that taped just shy of 30.
Late spring arrived in the Laguna Madre with what would constitute a blowout for most other systems. This is such a unique area that even with a long stretch of dry and wind-thrashed conditions the waters held mostly clean and the fish mostly cooperated. We are still enjoying some great catches and things should become even more interesting as we move through June. As fun as it is, we certainly look forward to days with less than 4Omph gusts.

Even before the waders came off, pesky critters like skipjacks, jack crevalle and even a few small sharks started showing up. The skipjacks were especially annoying, and if your retrieve was too high you could expect frayed leaders in most places where good trout were holding. They were all after the same thing and it seemed the entire food chain was concentrated around an exceptional shrimp population. It was also all about the shallow grass as that was where the favored forage was.

Most of the better catches came skinny including some lengthy trout, albeit a tad skinnier than those cooler water heavyweights we had been enjoying. Pictured is Casey Rollins releasing a beauty just short of thirty fooled by a plastic tail, which remains my confidence bait. Between larger specimens such as this, the trout bite running twenty to twenty four inches has been inspiring to say the least. We may have made a good decision going from cooler-based to cool-based fishing; the fish just seem to get larger.

With recent gale force winds our best catches have been made earlier in the day before the floating grass becomes oppressive. The problem hasn't actually been the normal Laguna seagrass, we are plagued with nasty florescent green algae that seems to have flourished over the past several years. I am not sure of its proper name, maybe filamentous algae; we just call it "green spooge" and no lure will get through this stuff, even Gamakatsu single-hooked topwaters will clog. It is best to set that alarm clock early as the mid-day wind stirs it up.

Besides the exceptional trout population, redfish also appear to be thriving. They can be fickle, though. One day they will push wakes as far as you care to run and the next day they simply vanish. It seems that they will either invade the flats or disappear completely. Redfish action should grow more consistent as summer eases closer and those coveted sight-casting opportunities should become more predictable. I'll still be throwing a tail most days, although oversized redfish crashing topwaters in the shallow sand is always a thrill.

As a side note, two things we have no shortage of are stingrays and fishing pressure. We always get spoiled in cooler months when the rays pull off the flats and we have the water to ourselves. So much for a five trout limit deterring the masses. Even so, pressure remains lighter here than in most other areas plus there is plenty of water for all if approached respectively. More on rays; we have actually had two men hit in the past two months, which is rare here. The entire ecosystem seems to be alive with things we want, but also with things we don't, so please present yourselves accordingly when wading. It is suggested to either wear protective gear or do the stingray shuffle as we all know how. Nothing to freak about, but there is just a lot going on down here.

June is a fun month. Everything is here and in place and opportunities abound. Sightcasting to redfish will come into greater play and also those stack up schooling situations where you think about an elbow massage on the way home. Trout will be feeding on deeper grass beds and spoil bank edges, and don't think that big mama can't show up without notice. Our own Capt. McBride stuck a 32.5" right next to me last year the second week of June on the edge of a spoil bank. It was one of the most violent explosions I've ever seen.

The only thing I'd rather do than fish is to find better ways to cook the ones we keep. Redfish on the half shell, when done correctly, is gourmet fare and those of you discounting the throats are missing out. Take what you need and leave the rest, and perhaps we can all continue to enjoy the best sport available standing up. Just get in the water and get you some. Here's to a great summer.