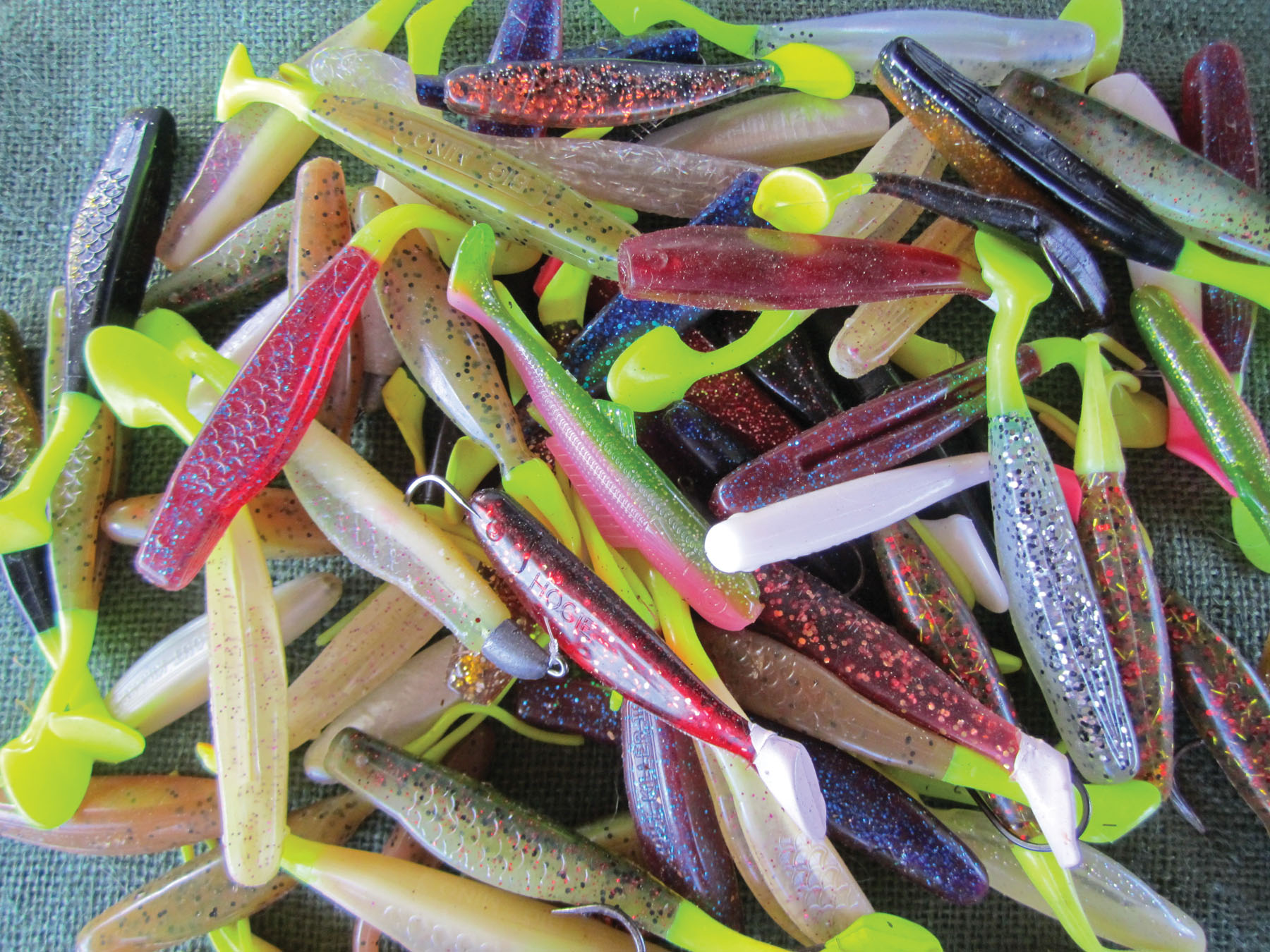 On plastic baits - the truth is I like all of them - especially the ones with paddletails!

Mother Nature has a reputation for being a moody woman and she has more than lived up to it recently. As soon as the northers became less frequent she threw us the next gauntlet of challenge. I'm sure most in the magazine will mention the wicked winds we have been fighting and believe me the Lower Laguna did not escape. We often do very well through the 25 and 30-mph stuff, but when afternoon gusts push over 45 and flirt with 50 it's just not as much fun and can be downright dangerous. However, for those determined to rear back and give it try, surprising good catches are being made in all-too-often blustery conditions.

Naturally we've had to re-do our fishing plans mostly fishing where we could and not where we should. Depending on wind direction, and there is a big difference between south and southeast down here, we usually managed to find green streaks in leeward shallows. On the worst days these would often hold until about noon or a bit later and thankfully we found fish in many of them. With a great rise in water levels many "new" areas have come into play. Color changes with flipping bait and a pelican or two is where you wanted to start.

The topwater bite has become much more consistent and at times has been strong. Full-sized Rapala Skitter Walks and Heddon One Knockers have been go-to numbers. When things got really rough it was time to bring out the louder MirrOlure She Dogs. Color patterns seemed secondary to good presentations, but a good bet is always a darker plug in dark water and lighter patterns for clear. Solid colors like bone or black do well for me in the junk while I favor patterns such as Okie Shad or Speckled Trout in green and clearer water. The same concept usually applies with soft baits. When the fish went down after a strong feed, soft plastics loped across potholes and along the edges of grassbeds have continued to produce.

I am often asked what soft plastics are the best, and the truth is I like all of them. It's more about getting a lure to where they are and then enticing them with moves that match their mood, not so much the brand. However, and having said that, I am basically a paddletail freak and some baits do have certain advantages. The durability of a Kelly Wiggler paddletail comes to mind as does the action of the Texas Tackle Factory Big Mino. My people who caught the most fish concentrated on good deliveries, and same as last month, it was still all about the little grassbeds and who could put a bait where they were at the right speed and depth. Another productive paddletail bait is the Gambler Flapp'n Shad which is easy to rig weedless when needed and we are about to address that issue more often.

What has changed most is overall water level. Some years we get a big push and some we don't, but this spring ushered in a good flush of Gulf water that was absolutely full of baitfish and many other critters. We are seeing jellyfish, another sign of a good exchange. Higher water level means more places for both fish and bait to hide, but standard early morning approaches such as the first grassline next to the sand, back lakes and flooded shorelines will make sense. What has also changed is the grasses, for both good and bad. It appears as if much of the grassbeds that suffered during last summer's freshwater flood are well on their way to recovery. This is good. Not so good is a continuing explosion of that nasty green filamentous algae that can take entire areas away from you as the day wears on and it begins to float, clogging the water column from top to bottom. There is nothing you can do about it except move. Hopefully it will be gone soon with the approach of summer.

Everything looks good for June, a month that usually brings plenty of quantity and quality. Wind should back off to more fishable speeds while redfish action heats up in the shallows. I also expect excellent chances for heavy trout. If there was ever a month to introduce new anglers to the sport it would be in June. The water will become busier when school lets out, especially on weekends, so be on your toes and practice good boating manners. Always do unto others as you would have them do unto you!