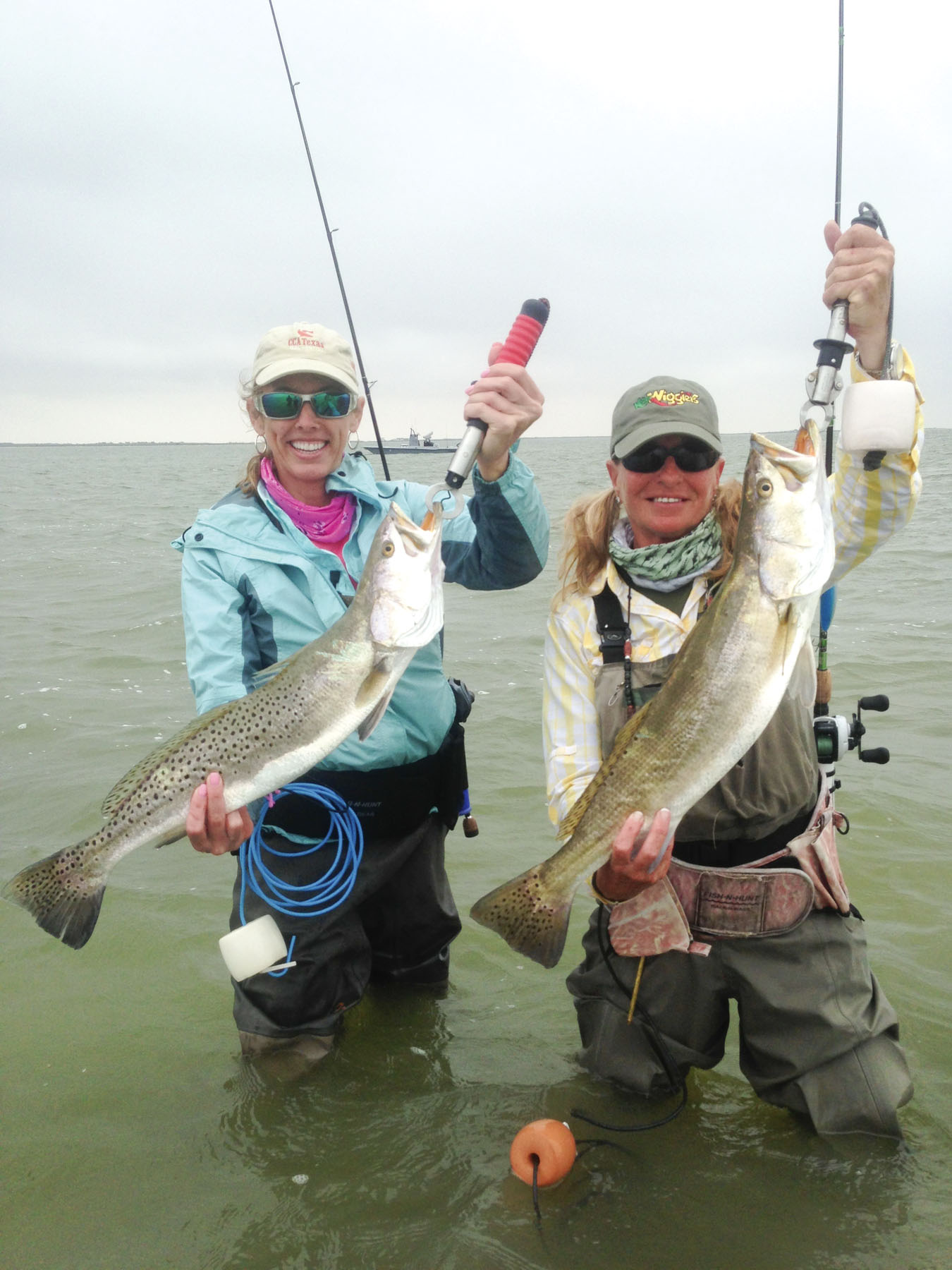 Dawn Axtman-Hare and I were wading side by side and the bites came but a few seconds apart. Hers taped an honest 28 and mine near 30; we were both very happy!
Change is always a certainty on the water, every hour can be different during a day of fishing and month to month, you'd swear sometimes you were on a different planet. I was getting excited to ditch my waders back in late-March and here I am still wearing them on May 10 now that's crazy!

If I was allowed only one word to describe the fishing of the past month I'd probably say decent. We've had some slow days but enough days with good numbers and a generous sprinkling of exceptional trout to keep the excitement level elevated. Depending on conditions we have been fishing shallow grass, soft mud and clear white sand from the Arroyo area all the way up to the Landcut. Patterns as we normally refer to them have not been holding very long with the instability of the weather. The best trout have been found about knee-deep over spongy sand dotted with clumps of grass. Several clients landed career-best fish between 28 and 30 inches and I was blessed with a record fish as well thirty-three inches and 9.5 pounds on a Skitter Walk. The blow-up was tremendous and the sight and sound of it will be etched into my memory for as long as I live.

We have been enjoying a fairly steady topwater trout bite. Skitter Walks in green chrome, blue chrome and pink have been living up to their reputation as good producers, as have One Knockers and the Spook Jr. Academy has a new bait in their H2O Express line called the Top Notch. This 4" plug in natural seatrout color pattern has proved itself to be a great finesse bait, getting slammed repeatedly in clear shallow water.

When the fish won't come all the way to the top, they're just plain stubborn that way at times, Kelley Wigglers Ball Tail Shads along with their 4" Paddle Tails (darker shades in off-colored and lighter in clear) on 1/8 ounce jigs remain my personal favorite soft plastics. To correct a misprint last month; I use Kelley's new Flomingo color in clear to clean-green, not murky.

My fishing program will take on a new face this month as the daily nerve-wracking trophy pressure gives way to simply having a fun day of catching. June is fun fishing, and quite simply, a good "get bit" period for the adventurous hardcores as well as less serious types. Everything the Lower Laguna is famous for should be in play from sight-casting reds on the flats to wading shoulder-deep for trout. There will still be opportunity for trout breaking the eight-pound mark which is certain to be welcomed by the legions of STAR anglers that come to Port Mansfield each summer. School trout should be voracious on deeper grassbeds and spoil bank edges, but don't think that big mama can't show up anytime without notice. Down here we can still catch heavier trout through summer, and good places to look are along Intracoastal spoil banks, windward shorelines, remote backwaters, and as an exotic bonus sight-casting to them in the midday shallow white sand. Drifters, folks who like to anchor, waders and polers, everybody should be able to target their passion in June.

It can still be quite windy at times but that shouldn't bother the enthusiastic outdoorsmen all too badly. We actually need some wind, as long as it stays under 20 mph sustained, and preferably from a true southeast direction. Most of the eastern third of the bay will still hold clear enough for great fishing (sometimes too clear) even with a few gusts greater than 20. Chop on the water will encourage fish to stay shallow longer however, so as always, a good plan is to start shallow and eliminate water going deeper until you find them. A true south wind can present a few problems though, as several areas are still lacking their historic grassbeds and the water becomes "too colorful" rather quickly. But don't be fooled. The fish do not leave the area when this happens; clarity is a far bigger issue for us than them.

The bottom line is that fishing, just like life itself, is always better when we really go for it. The fish are waiting if we cast for them and being on the water is always better than being stuck in a world of freeways, time clocks and deadlines. I am looking forward to the beauty of early summer on the Laguna Madre and I hope to see you out there. Always remember to fish conservatively, be courteous to your fellow anglers, and above all be safe!