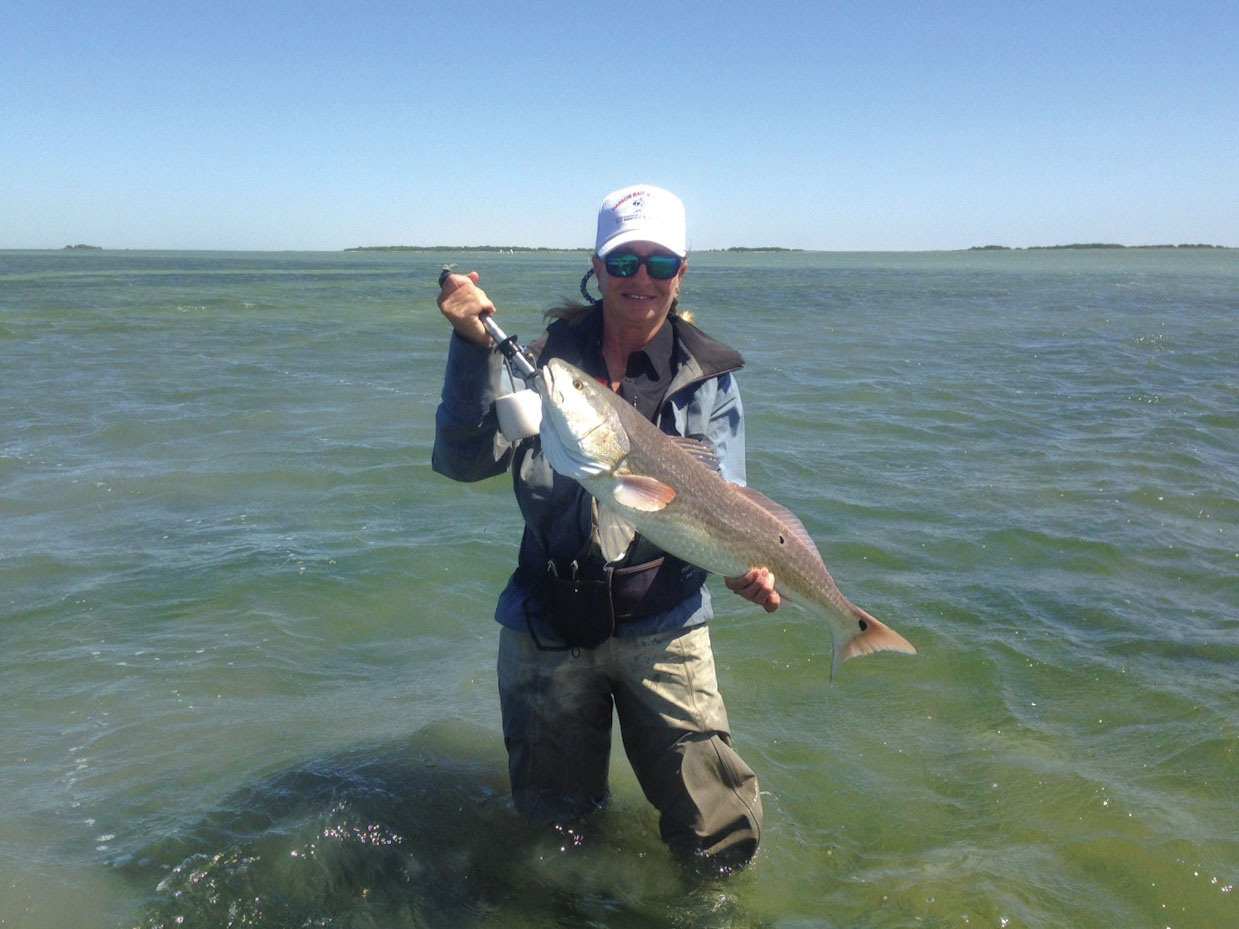 Sightcasting battlewagon-class reds in shin-deep water has been our best sport lately.
Another month of fishing has flown by and if you look at fishing as fishing you will be okay. We would all like the catching to be more consistent though that has not been the case lately. I hope it comes soon because here recently the better days came with a lot of hard work and persistence.

Overall, fishing has been running below par most of the past month and I guess we could call it "halfway okay" the past couple of weeks, with some trips bordering on horrible while braving crazy high winds. We also had a few dismal trips during perfect conditions which has had me scratching my head quite a bit.

The 2013 fall trout gill net studies were at an all time low and the fishery as of now reflects just that. It truly saddens me knowing the summer season has just started and what we may have left will take a very long time to recover. I am not a scientist but I am out there quite a bit and this is the second year of this and seems to be even worse. I also have concerns with redfish numbers and would like to know how well they were represented in the gill net studies.

The only glimmer of hope is that when the tides dump next moon and the shrimp make their way out of the backwaters we may see more redfish on the flats. Saying this, I hope we all make an attempt to not over harvest. We recently had one of the first big tournaments of the year that allowed all types of bait with 300 registered. The largest trout I believe was four pounds and the red was a little over seven. Two words would describe thisNot Normal.

Old school patterns (as a general rule) are not working very well and just as they begin to produce the late-sleeping armada zig-zags the skinny flats to hell and back...so that pattern gets blown to bits even before it gets rolling. In past times we could still locate fish as they moved from the skinny to the deeper potholes and ledges near the ICW, and I hate to report that has not produced much either. I would like to blame it on the consistent high winds and turbidity caused from it, but I do not feel that is the case.

Finding good concentrations of fish in traditional areas and patterns has been a grind...they are either moving deep and not biting, or we do not have the numbers.

A few months back I reported a decent winter and early spring and I thought it would get better and better, and despite that it has not I am still going out there and attempting to make each trip a success. If it looks fishy I fish it, and I fish it thoroughly to read all the signsbaitfish, cruising gamefish we can see, mud boils, etc. Many times I may leave the area and come back to fish it later in the day with good results. Other times I just move a little deeper where it is less spooky to get the bite. This is a lot smarter than a long and windy boat ride to another area that is not a guarantee.

I have written many times about fishing with "your eyes" and taking advantage of what the signs are trying to tell you. If you are seeing flipping bait, current lines on a color change, and a few birds hovering here and there, you need to give it some effort. It's just like hunting.

By the time you read this the bull tide should have crested and finished falling, hopefully we will see greater numbers of fish returning to the shallows. Summer patterns should be settling in with fewer wind events but, summer also brings bigger crowds. Be courteous to other boaters and to the fishery. The Laguna is a special place and deserves our respect!