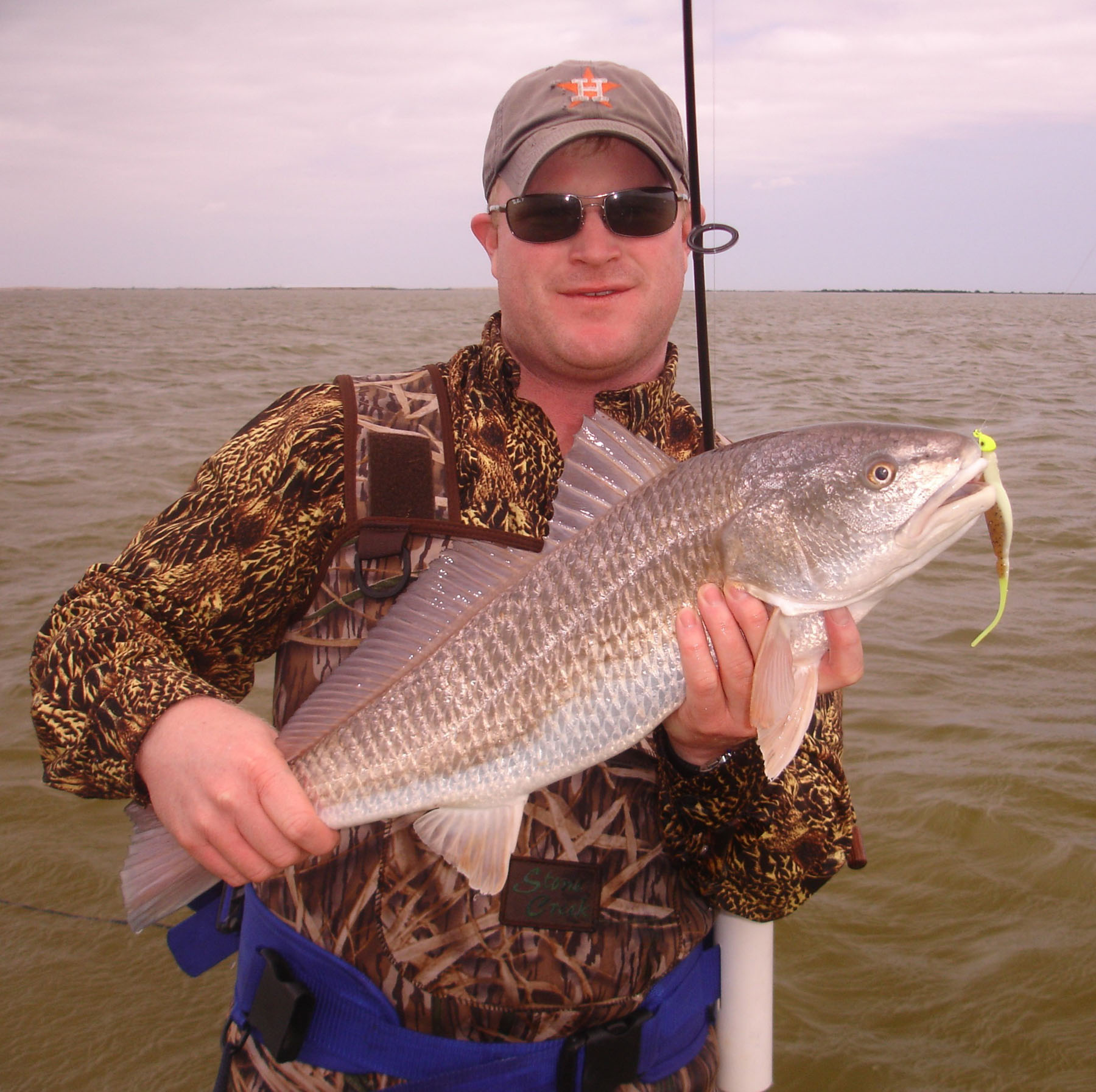 Jeff Ortloff proved that dragging a tail on bottom can pay off big.
February, as usual, was one of the more interesting months to fish in the Lower Laguna. Being this far south, one day you couldn't put on enough clothes and the next day you're in short sleeves and working towards a bad sunburn. We probed waters ranging from 43 degrees to over 67 within spans of just a few days, not to mention fighting the good fight between the north and south winds. We had some great days among some trying ones, and no matter how compelling February is for trophy trout seekers, March should bring us even more heavyweight potential.

February gave us some reliable patterns to work with despite some of the conditions we had to work in. The immediate recovery period after a strong norther was one of the most predictable. As soon as conditions moderated, especially if the sun came out, our better fish routinely moved up shallow. By shallow, I mean from calf to knee deep. Shallow water warms quickly and both predators and prey are quick to take advantage of it. It seemed that the bigger fish were the first to move up. The pelicans were often the best indicator of where to start. Even if the bait is down and inactive, these big birds know where they are and will at least sit close to them. Use Mother Nature to show you the way every time she offers. The best bottoms were soft with darker grass, especially along slopes that led to four or more feet.

We have been doing well with straight and paddletail plastics, Corkies and medium-sized topwaters. In muddier water I still have high confidence in a simple paddle tail bait because of its vibration, usually in darker colors. Various Corkies were also thrown with success, especially when hunting big trout. However, with this February's overabundance of big redfish, several of these hard to get baits would often get demolished in one day. We also enjoyed several good topwater bites, and one of the better ones occurred one mid-day as the shallow water warmed from forty eight to fifty four degrees.

Aside from aggressive feeding periods, the bite was often so subtle that detection was difficult even for a pro. I truly feel that if I had not been using Suffix braid, not to mention a high-end rod, that I would have never felt many of the softer bites. One of our most productive approaches during periods of low activity was dragging a straight-tailed soft plastic on the bottom and through the grass. When fish refused to rise for a lure, as they often did, they would usually still pick up a tail sliding next to them. Again, it was all about feeling the bite and good timing on the hookset.

During March, patterns will start to change giving us many more exciting options about where and how to fish. Usually by the middle of the month we see a significant rise in overall water levels. We expect to see more fish using the flats proper and patrolling crunchy, waist deep potholes. Redfish will often move high on the sand, so tailing and clear-water sightcasting opportunities will become more common. As the levels rise, the back areas and shorelines should see an increase in large trout. Some of the heaviest fish are vulnerable during March as they feed voraciously toward their first spawn of the year, and many will still have their thick shouldered winter weight on them. Last year we had several fish go between eight and nine pounds during March, and since it appears this will be another year without a freeze, there's no reason why we can't do even better this year.

Of course, one of the most popular ways to target bigger trout is to be relentless with a large topwater. Shoreline structure, back water areas full of bait, and spoil banks can all produce big fish up top during spring. While a big topwater is probably the most exciting way to fish with obviously explosive results, let's don't forget other less dramatic but proven techniques.

Signals of early spring will be lots of smaller baitfish moving in large schools. There are many times where a large fish will turn down an aggressive presentation but snap up smaller, more delicate lures. Numerous times we've seen precise tail presentations outperform topwaters, and not just on smaller fish.

Target your casts to small potholes and other minor depressions. We have found that tightening the presentation and probing every small deviation can yield better results than blind banging with a topwater all day and hoping for a big one to strike. Precision casting needs to be a large part of our game plan and we should pursue it as intently as surface fishing. We can try to catch fish how we want to catch them, or we can catch them how they are more easily caught for the moment. Either way, it's all good and we are all looking forward to clear spring tides, bait rich waters, and the lure smashing predators who rule the flats.

Here's to catching your personal best, and yes, the Lower Laguna is still my kind of place.