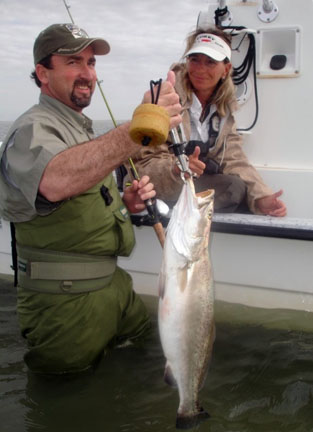 We’re looking for more like this in March.
Fishing mostly held to expectations this past month, and fortunately we had to surrender relatively few days to brutal conditions. Low tides also presented their typical challenges, but let's remember they also help tighten the playing field and concentrate fish. We might find that a common thread shared by most successful fishermen is the relentless determination to turn all adversities into advantage. March will bring a new set of challenges, but the best news is that the Laguna still appears on quite an encouraging course.

Big trout usually command most headlines during the cold months, and indeed many of my excited anglers earned their personal best. Several days were consumed with hoisting the Boga Grip to weigh yet another impressive fish, but for whatever reason, that thirty-inch mark consistently eluded us by a quarter of an inch. However, we certainly know those upper class fish are there because we routinely see them in these clear shallows. It's exciting to know that it is just a matter of time and timing.

However, even without topping that curious benchmark to date, the numbers of quality fish still surpass the past several seasons. Most were caught on either tails or Corkys. Topwaters produced well earlier in the period but have been less consistent of late. The amount of forage is extreme in many locations including an explosion of shrimp.

Redfish, which down here enjoy at least equal status as bonefish in exotic locales, have been thick and just flat-out mean. On calm days when they invade the flats the wakes can seem endless. During windy conditions we are finding huge groups stacked in depressions and troughs.

Besides the shrimp, the crab population is uncommon to the point we have found them clinging to topwaters; the redfish are happily gorging on this crustacean banquet. However, that can only mean they are rooting like hogs, pushing the crabs up, and if you are not snagging grass you are not snagging fish. We have enjoyed several seventy to eighty fish days, and it has been interesting to note, a retrieve just inches too high above the grass would draw a blank. As always, after finding fish, it's all about the presentation.

Other news is that dredging along the ICW is currently underway from the Land Cut to the Island. Slurries are being pumped on existing disposal sights which will hopefully create new structure over time. However, there are now some patches of horrible water. We eagerly await the results of the East Cut being dredged and a strong push of Gulf water this spring.

As far as suggestions for the coming month; March is "reality" fishing at it's finest. It might deliver magical water temperatures, green bull tides and overstuffed topwater trout, or it might bring a wind blasted nightmare. We may get twenty days of great conditions or perhaps only a few where an anchor will hold. We'll just have to go for it and make it happen.

Some of my most memorable early spring days have been during ridiculous conditions. The fish are going to be somewhere, and we won't get on them if we don't go. Remember, screaming winds down here mean that the water is dropping in some areas but flooding in others and there will always be opportunities. Pray for fair seas, fish wherever it makes sense, and be glad you had the chance.