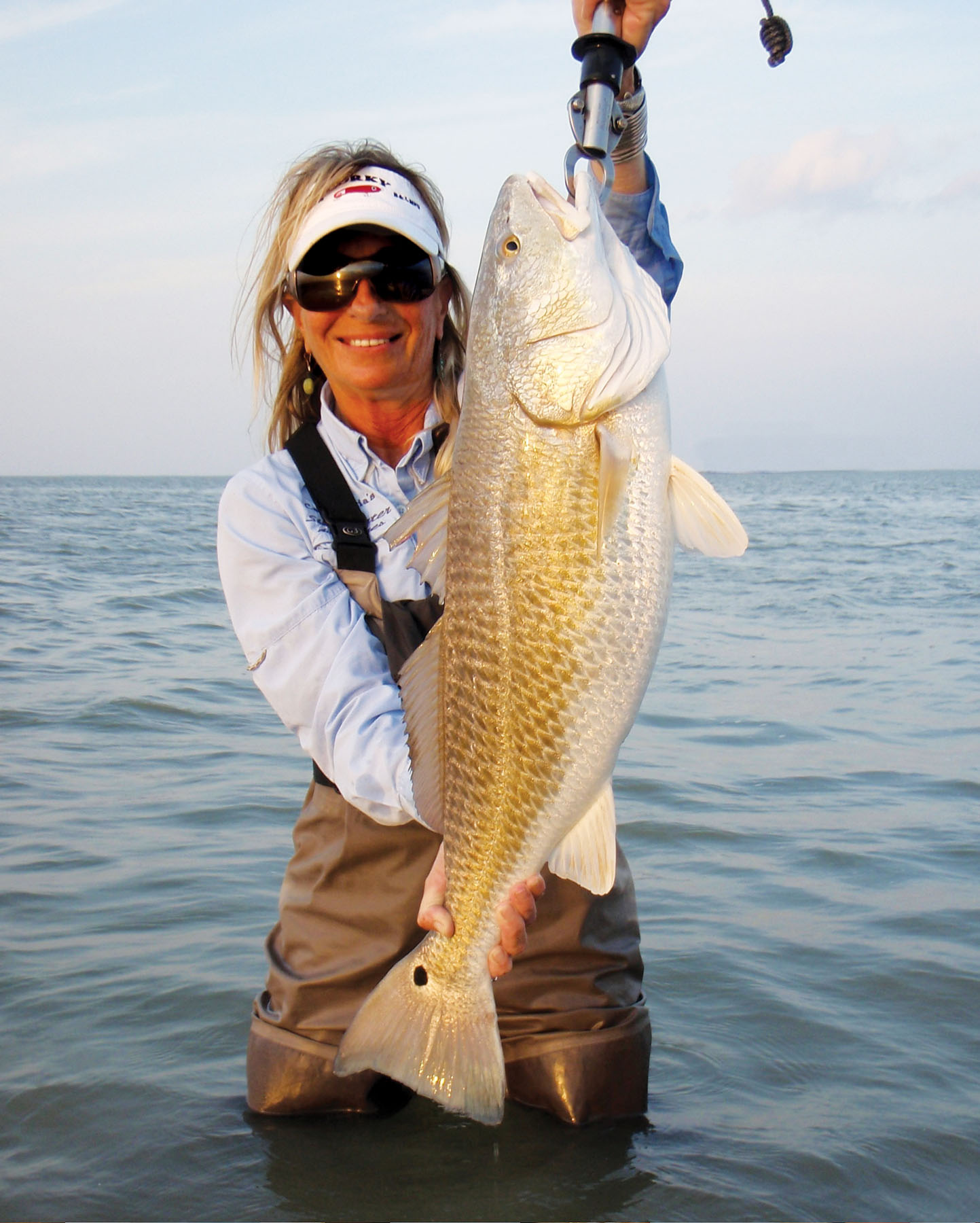 Big redfish should be on the flats gorging on small crabs and shrimp.

What a rock-n-roll fall and winter we've had. Red tide, colder than expected water temps, a hard freeze, an extended visit from an ICW dredging operation; what else could you ask for? We're still catching them though, but with much more appreciation for those "easier" days that will hopefully return soon. Everybody looks forward to the magic of March.

Cold weather has dictated cold-water fishing tactics and thankfully the bigger fish have been "reasonably" predictable when the weather lets us go. Most action has been closer to the Intracoastal after fronts and small depressions in the flats near deeper water have been holding the most fish overall. Finding baitfish has been the key, and then you just have to grind it low on all but the perfect days. I must admit that we struggled on several occasions, even with good signs showing. Even so, the rewards were great when it happened.

For the most part it has been all about plastics but the Corky guys have been doing fairly well too. The topwater bite of late has been nil. As for me, the trusty 1/8 oz jighead still gets most things done. Fishing was so slow for a while that I began experimenting with lures and colors hoping to make something happen; the best have been darker Devil Eyes and Hogie or Kelly Wiggler paddle tails.

As for the freeze; we saw very few dead fish but sadly there were hundreds of dead and cold-stunned green sea turtles. I never knew there were so many here during winter and there are certainly fewer now.

The ICW dredging operation mentioned has been busy from the Land Cut south to Port and will continue. According to reliable sources, it is the largest maintenance commitment here since the waterway first opened. The dredge disposal, for the most part, is being slurried into several new spoil areas adjacent to the ditch. There may be some newly created areas which will pay off in the future, but most recently the turbidity has been bothersome at best. In fact, at times, the suspended silts are horrible and we can't wait for this job to move on. In the meantime the operation is still underway and we will have to learn how to navigate the newly created spoil banks so be careful while running in low light conditions.

We are all waiting for March's magic. March means a new push of water on strong tides and the trout will be feeding aggressively in preparation to begin spawning. Big redfish should be on the flats gorging on small crabs and shrimp. It will be a time of jackets in the mornings, short sleeves in the afternoons, and fish moving all throughout the day. After Spring Break we can expect to see more fishermen as well. Common sense and courtesy on the water will become very important.

A word about wading etiquette: It is good form, especially for guides, to keep everybody in reasonable order. When people spread out in all directions it becomes difficult for other waders and drifters to share an area and also difficult to navigate around the group. In this day and time we just can't be that selfish. Stay tight and we can all get along much better.

Another thing March will surely bring is the wrath of spring wind. Wind doesn't bother us near as much as it does on the upper and middle coast and in fact can help, especially if the direction is sweet and consistent. Wind moves water, creates color changes, and encourages fish to move and feed. Loud topwaters such as the She Dog will work great in the chop.

Also in March we can expect our stingray friends to begin showing in shallower water. In clear water they are not much of a problem because we see them and they see us, but wading in murky water will become more "interactive" whether we like it or not. There are several products that offer stingray protection and it is advised to wear them. I am excited about the new Flats Boot by Simms that offers excellent protection yet still light in weight and comfortable. The coverage is great, but if you are worried about higher protection just slip on a pair of the wrap-around guards and you are probably as protected as one can get. Be safe, watch your baitfish, and get in there with the wind at your back.