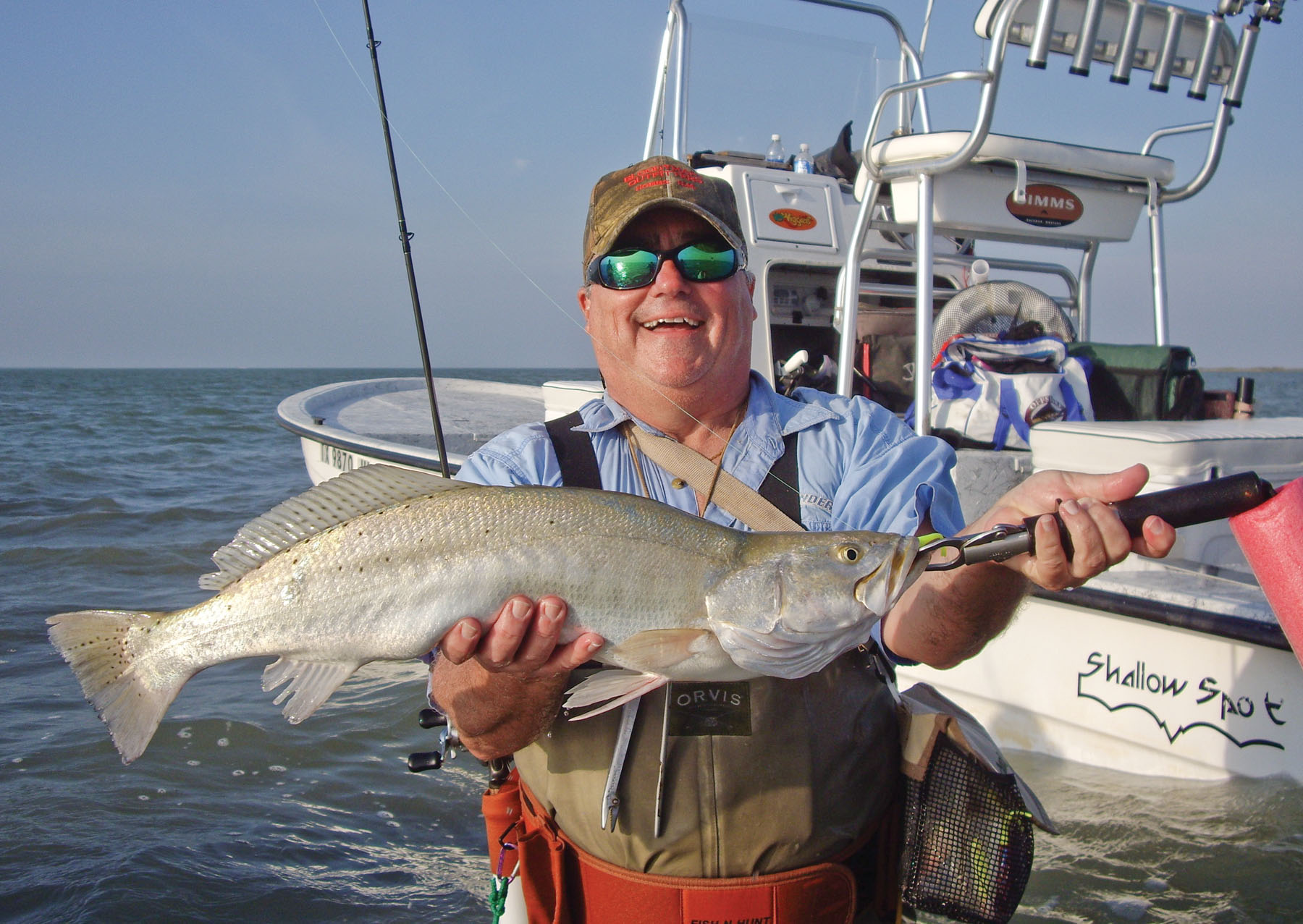 March promises to be a great month for heavier than normal trout.

Seems Ol' Jack Frost decided not to visit South Texas this winter and even though we are doing consistently well, the relatively warm water temperatures have presented some challenges compared to what we saw during prior winter seasons.

I'd say the overall outlook for March is as promising as ever, and some of y'all could end up catching your career-best trout, I might even catch mine. But even without achieving that lofty goal we should all do quite well and are certainly blessed for the extraordinary opportunity. In fact, "opportunity" is the very word I would use to describe your next trip down here.

As of this writing we have yet to see the traditional cold-water big-fish pattern emerge. Except for a few short days, the water temperatures since Christmas have routinely hovered between the mid-60s and into the 70s. How crazy is that?

Besides catching fish off the shallow sand virtually all winter, we actually had bananas growing in our backyard in mid-January. Other attention getters were earlier-than-expected swarms of juvenile forage species showing up. The lights in the boat slips during late January and early February have been literally teeming with all sorts of micro-sized life, and we evidently saw some related effects on the flats.

Despite the unseasonable warmth, catches have been pretty steady working scattered knee-to-shin deep grassbeds, mostly near long stretches of clear sand. We have found it necessary to change up our presentations a bit recently. Bigger baits are still getting whacked during obvious feeding periods, but smaller lures have by far been the steadiest producers - day in and day out. Bigger reds have been packed with dime-sized crab and some really tiny shrimp. I'm talking whiskers and eyeballs tiny. Most of our trout, and unfortunately even some Big Mamas that were not good release candidates, have been gorging on the tiny stuff same as the redfish. This is the kind of feeding we normally see in April - a more traditional month for bait this size in our bays. The mullet population is still exceptional, but with so much more to eat out there, don't be slow to downsize.

Strategies for March shouldn't change much, except as might prove necessary with stronger wind and increasing water levels. I expect to see an additional foot of water across the Lower Laguna system by month's end. Spring also brings prevailing south and southeast winds at a pretty steady clip, which will also move water into places we haven't seen in a while. Still, the patterns for most of the month should remain consistent with what we're doing right now.

Birds (those actively fishing and even those resting on the water), water color changes, rip lines, and rows of flipping mullet are the signs we seek on a daily basis - no matter the season. The more of these you can put together in a given area the better your chance of walking into a solid bite. Do not be discouraged if the size of the trout is just "average" at first, the bigger ones could be there too but just playing shy.

Equinox is March 20 and trout should start spawning in earnest shortly thereafter - which means the longest specimens should achieve their heaviest weight during the days leading up to that event. Make sure to carry a waterproof digital camera to make photos for your taxidermist if you are planning a replica mount. While you can bump into a school of heavyweights just about anywhere, the best chances may be tighter to recently flooded shorelines as we approach the equinox, smaller sloughs, backwater lakes, and shallow grassbeds in generally sandy areas.

As for me, I just like to get out there, put my boat and brain to work, and catch whatever nature has to offer for the day. That could be anything from sight-casting a bunch of thug redfish in the clear shallows - "top-watering" big trout over schools of shallow mullet - or finessing a paddletail through the grass or perhaps "stalling" a Corky over sand pockets. To me it's just all good, and my trophy expectation may not be exactly what you have in mind. I'm just glad to be alive and allowed to experience this wonderful place called the Laguna Madre. The opportunities seem never ending.