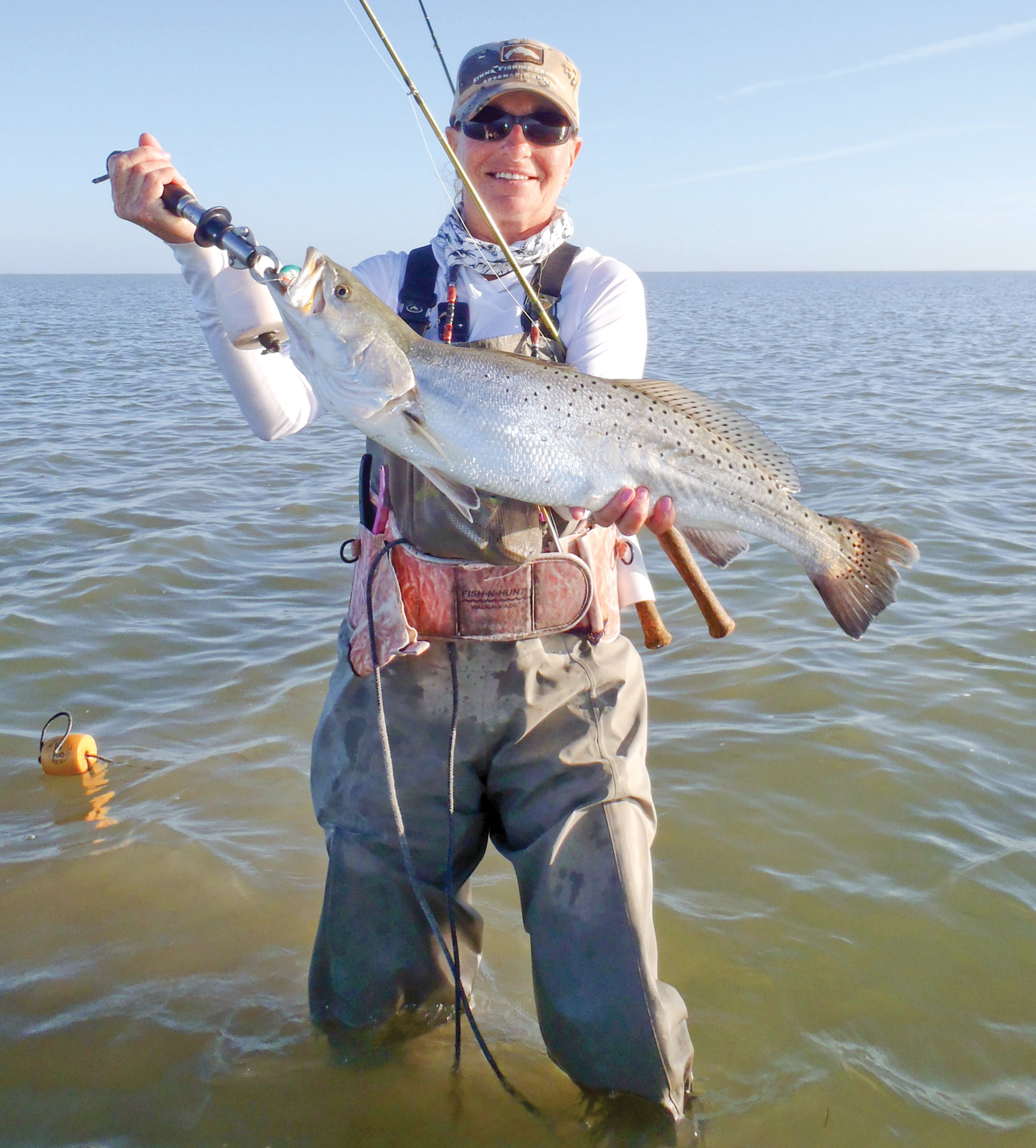 Knee deep has been the zone for some very nice trout lately.

What can I say about winter fishing in deep South Texas? We have our heaters cranked up in the mornings and beg for some A/C while peeling off our waders in the afternoon. The catching part has also been just as extreme; on fire one day then mysteriously cold the next. However, things look encouraging for patterns to become more consistent soon.

Recapping the past month, life on the water changed suddenly, and thankfully for the better. After grinding through a less than hoped for summer and fall, I became a bit concerned about the overall status of our Lower Laguna fishery. Lure folks seem to have worked harder for less than most previous years. Although realistic fishermen always have to make the best of whatever we are given, many days became discouraging.

However, after our water temperatures finally dropped into the mid to upper 40s a few times, the shallow flats suddenly filled with fish. Seemingly out of nowhere, and with a strong return of our absentee redfish. Large trout could be seen sliding along the flats in numbers not enjoyed for quite a while. Where had they been? Why?

Our best episodes were usually post-norther, the colder the better. During the first recovery period after a strong front, incredible numbers of fish often invaded the extreme shallows to bask in the clear, warming comfort. Pelicans and terns told us where to start. However, the fish would sometimes pull up too shallow to be catchable. I don't care who you are; fishing crystal-clear ankle-deep is tough. Regardless, we were lucky to enjoy some exceptional fishing, and my new Haynie Cat could not only get us in there, but could get us out as well. Naturally, the best days came when they weren't so far up in the skinny.

While we could sometimes catch them way skinny, the best action came when we found them about knee to mid-thigh deep. On winter's low tides, that's just about where the darker scattered grass begins. Some real heavyweights started using the zone I'm describing on the east side, both before and after northers, but the strongest feeds seemed more predictable immediately after a hard blow. By working slowly and thoroughly targeting each knee-deep grassy area we were able to catch quality trout. When we worked thigh to waist deep we caught a few nice ones but mostly smaller fish, so there's a tip for you.

Despite some fishing myths, topwaters have been working pretty well, even on the coldest of early mornings. The key has been to not overwork the lure; long pauses between twitches will entice rather than spook. I was also impressed with Paul Brown's latest version of his Broken-Back Corky with the mylar insert (rather than the standard cork.) These baits are amazing in the shallows with incredible wounded baitfish action. Capt. Bruce Baugh helps Paul with marketing, and he can get you hooked up - www.tidelinechartersllc.com.

March means both higher water and winds so we'll have to adjust our efforts daily as conditions dictate. Fishing with your eyes will be more important than fishing your same old spots. Learning to read the water well, deciphering the smallest of nature's clues about where fish might be, is one of the most important skills needed to be a successful angler when the seasons are changing.

Quite often with the arrival of spring we see more frequent feeding and feeding for longer periods as mature trout are beginning to produce eggs. The earliest spawning could begin toward the end of the month and with winter fat and eggs aboard we could find the years heaviest weights. Don't be caught unprepared go over your reels, spool up with new line, use good leader material and replace hooks on all your baits.

Another very real possibility is sightcasting in the clear shallows. Redfish of course, but large trout can also found there as well. Little is more exciting than throwing to fish you can see, especially when they have dark green backs and silvery sides. Remember though, these speckled giants are the future of our fishery. Please handle with care and practice CPR. I'm sure we all want to do this for years to come, so let's be wise about our cooler decisions.

Spring is almost here and new opportunities await. What I've seen over the past several weeks makes me believe were in for a great season. Be excited, be ready, and be thankful.