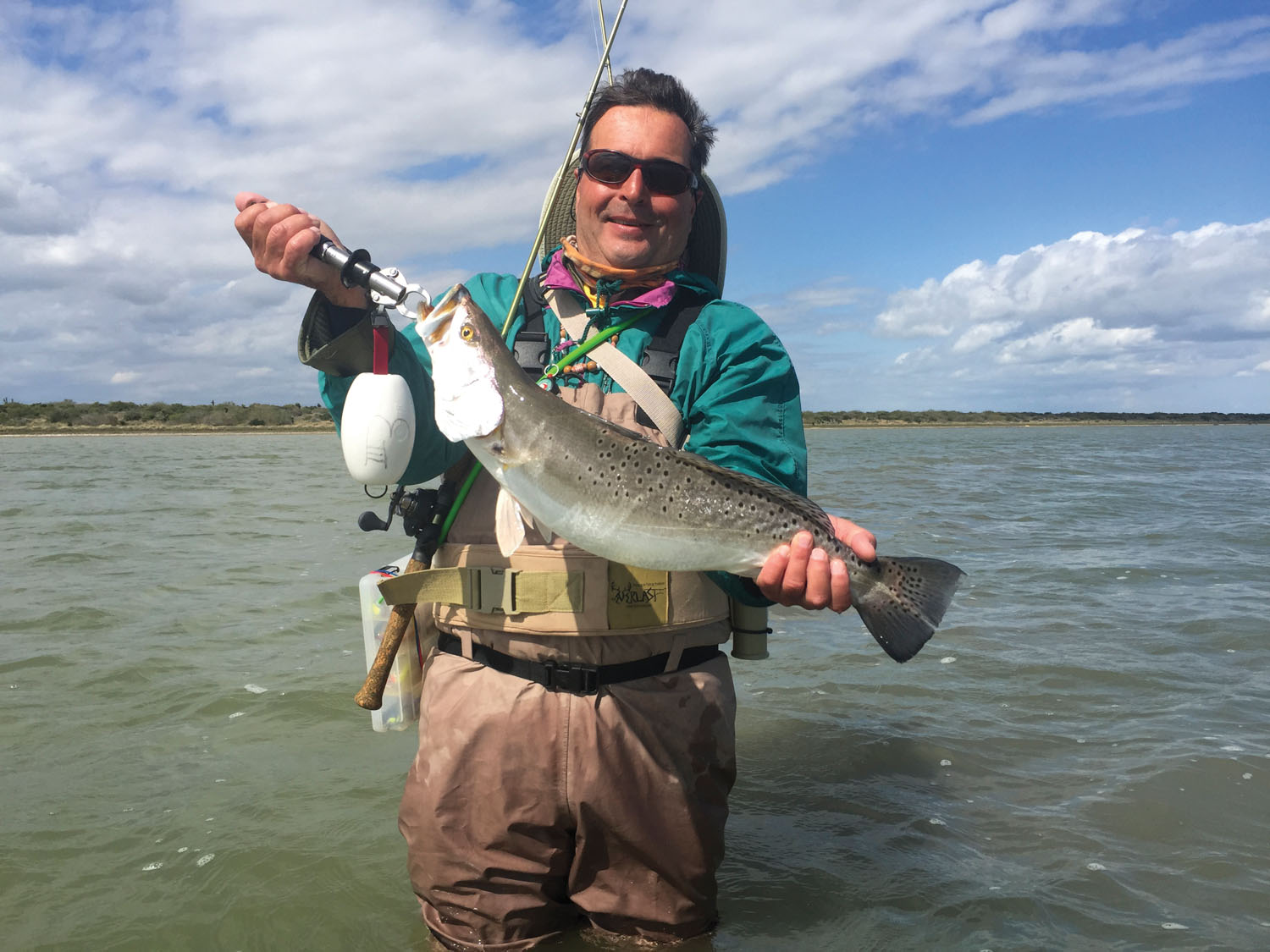 March has always been a very interesting month to fish the Lower Laguna Madre. The weather will usually have moderated to the point that even harsh late-season northers will not drive the water temperatures much below 50 if ever, and recovery into the 60s occurs quickly. March is famous for wind and this has to be dealt with daily but, thanks to the recovery of seagrass since the 2010 flood, decent water clarity prevails somewhere within the bay system nearly every day.

February has been good to us thus far in delivering trophy-size trout and, despite February's reputation for producing lots of heavyweights, I anticipate an equal number or more in March, given the likelihood of fewer northers, quicker recoveries, and more fishable days in general. Actually, the odds of landing nine and ten pounders is greater as the fish continue to gain "winter" weight prior to spawning activity that begins in April.

While the classic winter trout pattern has appeared only a few times and briefly, given the mild winter weather, recovery days after northers have produced aggressive feeding and we have been able to capitalize on them. As soon as conditions moderated, especially if the sun came out, our better fish routinely moved shallow – knee deep or less.

Crash diving pelicans are the best indicators of baitfish presence and gamefish feeding activity, and even if the big birds are merely resting on the surface or occasionally "dipping" for a snack, you will know where the fish are holding.

The most productive bottom structures have been relatively soft with darker grass, especially near slopes, potholes, and windward shoreline troughs. We have been doing well with K-Wiggler Ball Tail Shads and custom painted Fat Boys. On warmer days, medium-size topwaters have also drawn strikes during solunar majors and minors. In murky to muddy water I have confidence in high-contrast lure colors like darker pink, pearl, and chartreuse. In cleaner water, bone diamond, gold, and light pink have been the "clear" winners. While the Fat Boys have placed high on the success chart we are reluctant to offer them when redfish are abundant. These brutes waste no time demolishing a custom Corky and I have already lost quite a few this way.

I mentioned having experienced several good topwater sessions during extended warm periods. Aside from fantastic feeding periods, the winter bite is often so subtle that even I found it difficult to detect, and I truly believe without my high-end Waterloo Rod and braided line I would be missing the softer bites. One of the most productive approaches during these periods is dragging a soft plastic or slow-twitched Corky near bottom, just above the grass. Again, it was all about feeling the bite in the first place and good hookset second.

March strategies shouldn't change much, except when necessary with stronger wind and higher water levels. I expect to see fully one foot more water in the entire system by month's end. Spring will also bring predominate south-southeasterly winds with quite a kick, but it will push water back into areas we haven't been able to fish in a while. Yet, for most of the month, the patterns should remain as they are now. Equinox is universally March 20 and trout should begin spawning within a few weeks thereafter so they will be achieving their heaviest weights during the final weeks of the month. Be ready with your camera!

Your best chances to encounter a school of heavyweights may be tight to recently flooded shorelines, smaller sloughs, backwater lakes, and sandy, shallow grass bed areas. For me, just being out there is a joy, and being able to share what nature has to offer. That could be sight-casting, with topwaters, or finessing a tail. It is all "Pura Vida" for me. My hope for you is the same, and the opportunity seems to be never-ending in this wonderful place called the Lower Laguna.