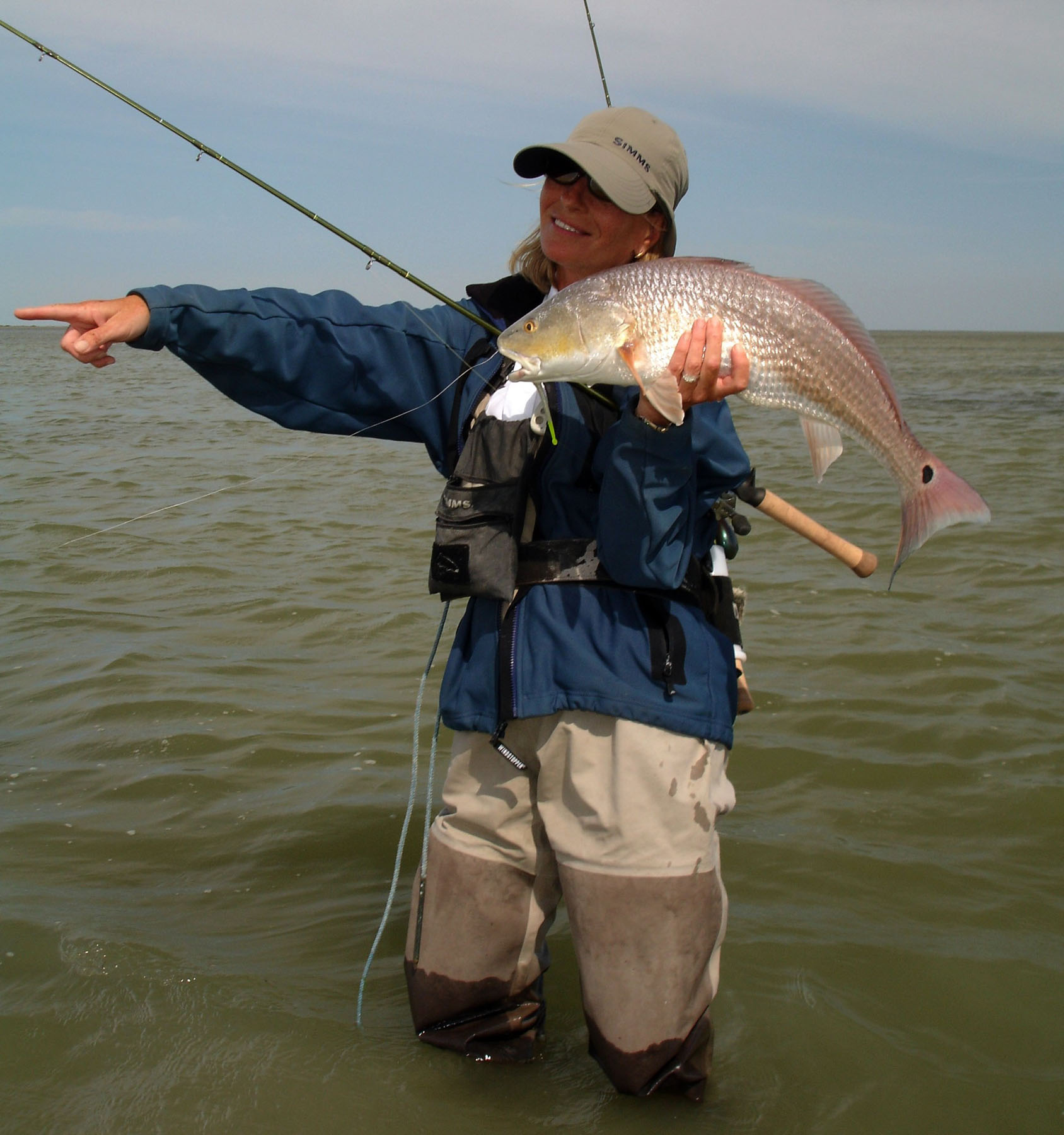 Redfish are looking real good right now.
If one word could describe the fishing during March and April here in the Lower Laguna Madre, outstanding would come close. Our fish did what they were supposed to do, and many times we were fortunate enough to be there when they did. Above average water temperatures and wind worked together to help spring thrive at its fullest. We have been fishing spring patterns since mid-February, meaning mostly shallow water with smaller baits, and the only thing that has really changed recently is the shear aggressiveness of our fish.  With some continued luck, May should offer even more opportunity.

If you can sense my excitement, the past several weeks have been everything you could hope it would be here in the Lower Laguna. Extreme southerly winds have blown in some exceptionally clean water from the gulf, and the flats are filling with new grasses shimmering in Bahama-clear water. Whatever brown tide we may have had seems gone, and it appears that at least for the near future, the Laguna is back to her finest form.

Fish moved onto traditional springtime structure early in March. Almost overnight, and seemingly out of nowhere, the spoil banks both north and south of town came alive with balls of exploding mullet. Schools of hard-bodied trout were right behind them. It is so nice to see the water boiling with life again and trout going enthusiastically airborne on surface baits, especially the numbers of fish between three and five pounds. SkitterWalks and She Dogs worked well during choppier conditions, but the little Super Spook Jr. out-performed most everything else during clear, calmer conditions. It’s spring so remember about smaller forage. Color didn’t seem as important as presentation, and an aggressive retrieve with a lot of teasy pauses was often the most explosive.

Other areas turned on as well, and in most conditions, it seemed to be all about the grass. Most of the deeper, darker grass beds held trout, and hopping dark tails just fast enough to avoid hanging up would usually get you bit. The system is still full of undersized trout, which is a great sign for the future, but you often have to work through numbers of them to find the better fish. Remember to take care in handling these little guys.

The reds showed up in force as well, with upper slot brutes determined to tear up lures and unravel nerves and poorly tied knots. Consistent areas for bigger redfish were muddier, shallow flats, along the sand to grassline edges, tight to shorelines and on top of submerged spoils. Finding mud boils stirred by actively grubbing reds was a sure thing. When you found good working mud, just about any lure you wanted to use worked well.

In looking towards May, we should only see more the same. For numbers of trout, submerged points along shorelines, deeper potholes on the flats, and the spoil banks will all become increasingly consistent. There will be a lot of water to choose from with higher spring tides, so let those color streaks, curious birds and flipping bait be the first clues about where to start. However, for those heavier trout the Laguna is famous for, smaller, distinctive structure in lower traffic areas will offer the greatest opportunity for the determined wader. Examples are nasty little holes on the west side, current swept cuts on spoil banks, against shallow windswept sand bars, and in off-colored areas holding active bait in small depressions.  Using soft plastics on Hogie 1/8th oz, short-shank screw lock jigheads will be routine, but so will topwaters and Corkies both early and late. If catching your personal best trout is one of your goals, May offers some of the best and most exciting opportunity of the year.

As far as our redfish are concerned, all looks good, and we should see some of those epic schools working by the middle of the month. Expect to see more tailing fish, mud boils, and large areas of ‘pushing’ water on the flats as the month wears on. Increasing grass will call for weedless spoons on many occasions, but again, topwaters rigged with single hooks will also help tremendously. Don’t be afraid of the traditional high winds of spring, as many of our best catches will occur with you had pulled down low. Just go and still enjoy the clear water here.

On a tackle note, we have been using Sufix Performance Braid for several months now. Our favorite is the 20-pound strength which measures the same diameter as 6-pound monofilament. It works very well with a rod length of twenty-pound fluorocarbon leader spliced with a double uni-knot. Fishing is even more fun now, as every aspect of fishing with lures seems magnified several times over given the no-stretch and sensitivity characteristics of this line. Even soft bites now seem ridiculously obvious.  One thing you’ll learn quickly learn when using a no stretch line is the importance of a good drag system and a lighter than normal drag setting. Expect to straighten hooks and lose fish during your learning curve, but also expect to hook more as there will be very few bites escaping detection. I don’t think there is any doubt that I am catching fish I would otherwise miss, and when you do catch them, a two pounder feels like a ten. Here’s to you and your ‘ten’ this spring. As for me, there is no finer place on earth to chase it than the shallow waters of this pristine Laguna. Fish like no one is looking and enjoy the results.