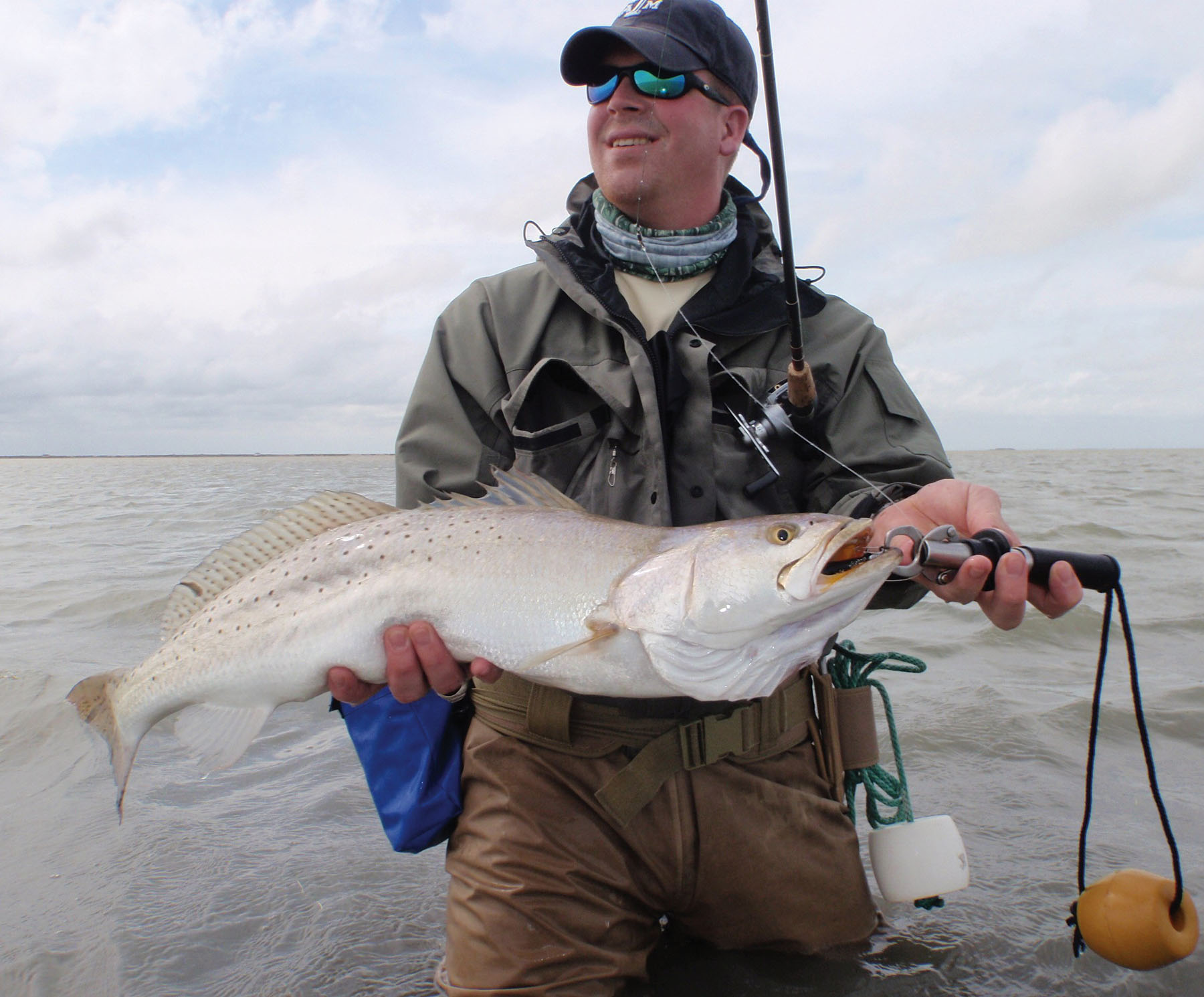 Soft plastic lures have been producing some excellent trout.
Despite increasing fears of brown water, our flats came alive recently with wakes, mud boils and aggressively feeding fish. Both trout and reds pulled up shallow, seemingly overnight. Truth is, they had probably been close all along, just not exactly where we wanted them. From what we are seeing right now it certainly looks promising and it's so good to finally shed those waders again. Besides the comfort factor, we could use some sun on those snow white legs. Bring on that Bull Frog, it's time for fun in the sun!

More good news is that a long-overdue topwater bite has finally kicked in. The bay system came alive with small, dancing shrimp and nickel-sized crabs and the fish have responded by showing a willingness to take smaller topwaters. The bite has been very aggressive and definitely a knee-shaking experience to keep us coming back when it happens in shin-deep water.

How about seven pound trout and thirty inch reds in water barely covering their backs? In fact, one day recently, the fish were so shallow where we stopped, we actually had to push the boat for a hundred yards or more to take off again. Now when you are running a Shallow Sport, I'd say that would qualify as skinny. Hey, we all screw up every now and then and I'll just blame this one on poor water clarity. You can run aground before you see the bottom in some areas, but the fish don't seem to care and neither do we as long as we are catching them.

Aside from the topwater bite, soft plastic baits have also been producing. Fishing skinny with a swimming-type bait, it's easy to keep it between floating grass on top and rooted grass on bottom.

I've mentioned this many times in past articles and certainly do not wish to sound redundant, but braided line is helping us catch fish we probably never knew were there back when we used mono exclusively. I still recommend Suffix in 20/6. It doesn't seem to backlash as much as some braids and when it does it's easier to clear. Top it off with a rod's length of 20# flourocarbon leader and you are ready to rock.

What can we expect during May? Well - everything seems late. Last year we found trout full of roe in mid-February and it didn't happen this year until late March. I always assumed spawning was driven mostly by photo-period and now I'm realizing that water temperature may be equally important. So what I'm saying is that May's predominant fishing patterns may be anybody's guess and I definitely expect everything to be several weeks to perhaps a month late.

Also different this year has been our tides. We are currently still more than a foot below normal. If you care to believe NOAA, they are predicting higher water levels and stronger flows over the next several weeks. This could change a lot of things and my guess is that we'll see a change for the better. Keep an eye on the edges of color streaks and as always watch for bait and birds.

Last May was awesome for big trout, and while we are hoping for a repeat, I have something I need to say about the way we fished.

As much fun as fishing tournaments can be (me too); the cleaning tables at some local events last year were just plain ugly piled to overflowing with big trout.

I would like to ask the tournament directors and corporations who sponsor these events to reduce the number of fish (especially trout over twenty-five inches) each team will bring to the weigh-in and perhaps even change the format to CPR. Many tournaments have already adopted more conservative formats and I hope we can change here in Port Mansfield too.

Now before we get into a bunch of holier-than-thou, I'll step up and say I have been as guilty as anybody bringing big trout to weigh-in. Last year I was fortunate to guide winning teams in two large tournaments and, looking back, my teams and I, and many others, agree that competition can lead us to do things we would never otherwise consider. It is hypocritical to promote Catch and Release 363 days of the year and then participate in killing big trout for bragging rights the other two. As Billy Sandifer says, "If we don't leave any there won't be any."

I know May will bring us awesome fishing. Please consider the future of our fisheries and practice more C&R. See ya out there!