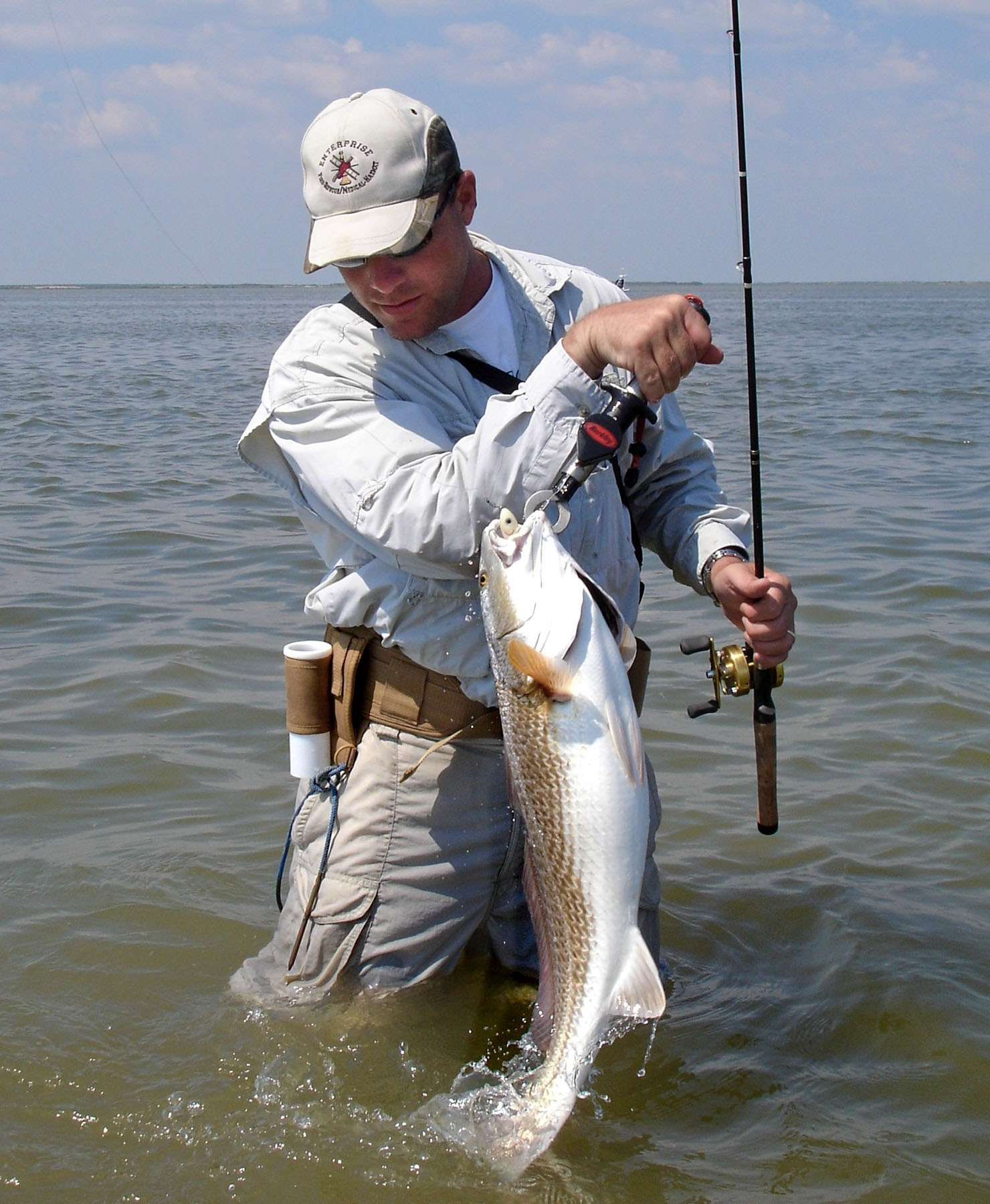 Wading wet and enjoying warm sunshine only a few days after a wicked late-season norther.

Wow, how fast does our fishing life fly? I just realized the tenth anniversary of my guiding career is only a few months away. Maybe it's just me but it seems that the seasons are running together too. One day we are decked out in waders and jackets working over big trout and the next trip we are shedding to the legal minimum while sight-casting reds under a cruel sun.

A quick look at fishing results of the past several weeks reminds us that is has been either very good or very bad. Despite how many fish may reside in our zip code, there are factors we just don't understand that ultimately dictate bragging rights. One day is near epic and the next is a water haul with the exact same conditions. Mother Nature, fickle gal that she is, proves herself a worthy opponent, so I guess that's why we keep going back.

An example of what we'll probably never understand occurred last week when my party and Mike's were wading side-by-side and five friends joined on the far end, fourteen in all. Everybody enjoyed steady, knee-deep topwater action from aggressive reds and occasional fat, explosive trout from three to six pounds. Every time I looked down the line I saw at least one bent rod, quite often two or three. However, the next few outings were a far cry, literally, as we struggled through a lean bite. Then, as if somebody threw a light switch, we had another awesome day right out of nowhere. All I can tell you is we just have to be there, be ready, and appreciate those precious chances we are given.

Down here in the Lower Laguna we do not "spot fish" per se, as we have very little defined structure compared with the bays on the middle and upper coast. A great but challenging aspect of this region is that fish often move daily, so the hunt turns out to be a bigger game than the actual catching. If we learn to pattern fish here we can probably find gamefish anywhere on the planet.

What we will normally do is pick a "quadrant" based on wind, i.e., north-south-east or west depending on direction and velocity. After that, we will usually try to start eliminating water from shallow to deep, running until we hopefully see some solid signs of life. A lot of visuals can qualify, from the occasional flipping of bait to full on pelican crashes, rip lines and abrupt color deviations. Each day is different! Once we find promising water, we, like everyone else, just have to be confident that fish are there and that we can figure out how to catch them. Probing the entire water column is a good approach, perhaps starting with a topwater, then dropping down in small increments with plastics or slow sinkers until it happens. When it happens, stay with the pattern until things change.

A successful box can be packed with many different lures, but for me a few proven standards are all I need or want. Lately for surface work it's been a Skitter Walk, or perhaps a She Dog if the wind has the surface chopped up. I don't know if it's me or the lure, but that woodpecker Skitter Walk has also been a producer. When it's time to go subsurface, a Kelly Wiggler paddle tail in either pumpkinseed/chartreuse, or plum/chartreuse (when the water is dirtier), works just fine. Bass Assassin's Die Dapper is another good one. Usually an 1/8 ounce jig covers most situations, but there are times when the fish seem to want more hang time and that's when we switch to the 1/16 size.

May will probably be windy, crowds will be increasing, and there will be lots of tournaments. There will also be a bunch of mean fish to be caught, so we'll just have to wiggle our way through the growing crowds and do our best to stay out of each other's way. I'm curious over the number of new folks coming down these days, so I make a point to speak with as many as I can. Overwhelming response points to the quality of fishing we have in the Lower Laguna since the five trout limit took effect back in 2007. Not only is the catching easier, it is the quality they are coming for. With all the publicity this fishery is receiving it baffles me that fishermen of the middle and upper coast are not hounding TPWD to enact similar regulations in those bays.