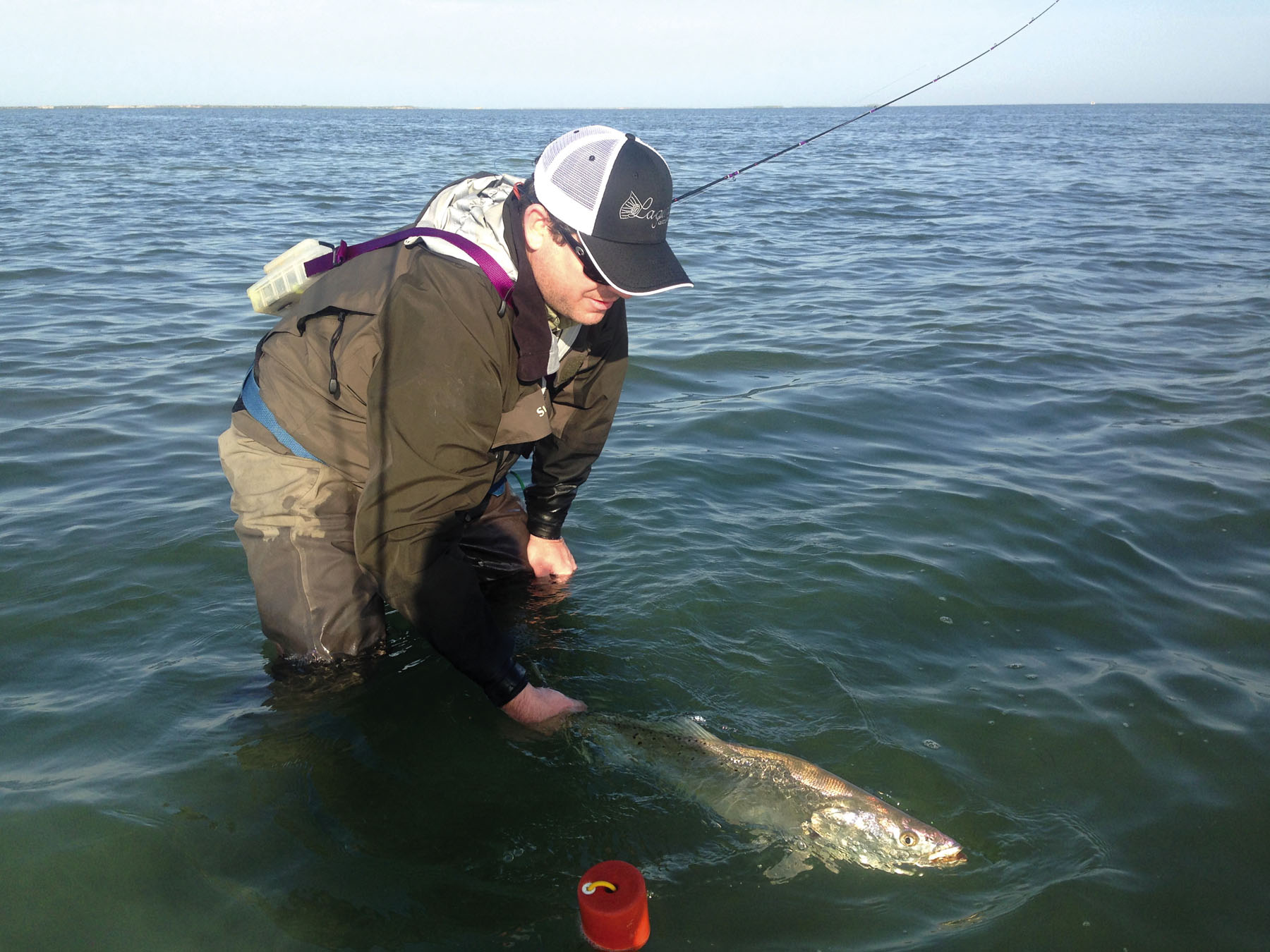 Todd letting her go…awesome!
While looking back on my May 2013 column here in Texas Saltwater Fishing Magazine, and to put things into perspective—all I can say is what a difference a year makes. And with saying that, conditions are still much like every other spring.

Not every month on the calendar reflects which season we are in, and right now the south wind is gusting at 40 mph sustained with gusts to 50 and the temperature is hovering close to 100°F. Just two days ago we had north wind gusting close to the same, wearing jackets over our waders. Tomorrow we will see 30 mph from the north again.  Welcome to springtime in South Texas!

And while that’s nothing really new, you may not want to hear this either, but fishing has been consistently inconsistent of late.  Every day it seems brings us some kind of hurdle to deal with, from struggling under alternating wind that changes in record time to lingering brown tide moving all around the Laguna.

The west side shoreline is severely impacted with the brown water from the mouth of the Land Cut to the island and finding a pattern has been tough to say the least. The only really good thing I can say about the brown stuff is that it creates a great big color change and a nice amount of catchable fish have been using it. This phenomenon can also be found on the east side both north and south, and in general we are just trudging through it, managing some pretty decent days when the gods allow.

Most of our better trout and redfish have been coming from shallow grass flats just outside the sand line, with the best clarity along the color change.  We are sincerely praying the spring tides will clear a bunch of it out, and if not we will deal with it the best we can.

I have always said that productive lure selection will depend largely on the angler, but I can confidently say surface lures are typically pulling up our trophy class fish, and I will personally keep chunking them a lot for that very reason.  Of course we will use tails much of the time, K-Wigglers ball tail shads and paddle tails, along with Bass Assassins are longtime go-to baits for me.  We also received some new soft plastic from ZMan that I am excited to try, DieZel Minnowz, pogies, paddlers, and jerks; both scented and non-scented, and I will happily let everyone know how they perform.

The lively topwater action should continue and I’ll be throwing my favorite Skitter Walks, One-Knockers, Super Spook Jrs, and full-sized Spooks and X-RAPS.

As we move into May, strong south and southeast winds and fewer north wind events should be the dominant pattern.  Most day’s winds will be mild to moderate at the start and gusting pretty darn hard from mid-day on.  I know I may sound redundant in this but starting shallow early and moving with color changes toward grass lines, and deeper potholes as the wind increases is a pattern, tried and true.   So watch for these conditions as they change along with bait and bird activity.

By the time this reaches the newsstand we should be coming out of waders and enjoying sparkling high tide levels from the gulf. Each year it surprises me as it seems to happen overnight.

The baitfish and gamefish riding in the tide usually makes May one of the best months here in Port Mansfield.  We can expect fat egg-laden trout and roaming schools of brute redfish to keep everyone excited about being out there.

Another good thing are the new trout regulations for the middle coast.  Only five from the South Padre to the Highway 457 bridge near Sargent. Y’all are going to see a difference.

Yes, spring is finally here and summer will be here before we know it.  So, let us all start sharing the water more patiently.  We should all try to remain calm and remember why we are out there in the first place.  We’ve had a few banner years and I am sure we would all like a repeat of those.  If it is about a fish dinner, try to take enough for a meal or two and be careful handling the egg-laden spawners for release.  With all the smart-phones on the water there’s really no excuse for recording success any other way.